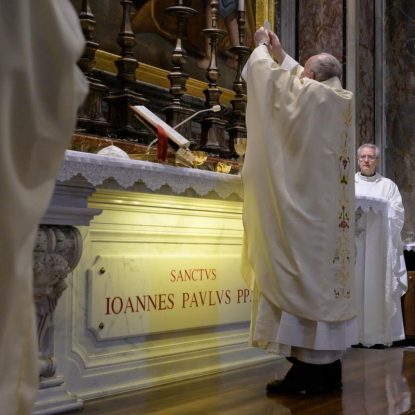 Pope Francis elevates the host during Mass at the tomb of St. John Paul II in St. Peter’s Basilica May 18, 2020, the 100th anniversary of the late pope’s birth (CNS photo/Vatican Media)

“Let us pray to him today that he may give all of us — especially shepherds of the church — but all of us, the grace of prayer, the grace of closeness and the grace of justice-mercy, mercy-justice,” the pope said May 18, the 100th anniversary of the Polish pope’s birth.

Before releasing a written decree later that day, Pope Francis also announced during the Mass that the Oct. 5 liturgical memorial of St. Faustina Kowalska would no longer be optional but would be an obligatory feast day for the whole church. St. John Paul canonized St. Faustina and promoted her devotion to Divine Mercy.

With just a few dozen people — most of whom were wearing face masks — spread out in the pews, it was the first day after almost two months that Masses were open to the public throughout Italy as part of an easing of restrictions to control the spread of the coronavirus.

The pope, concelebrants and lectors did not wear face protection, but they did abide by social distancing rules.

There were three things that made St. John Paul such a good shepherd: his intense dedication to prayer; his closeness to the people; and his love for God’s merciful justice, Pope Francis said.

St. John Paul prayed a lot even with all he had to do as leader of the universal church, he said.

“He knew well that the first task of a bishop is to pray,” he said. This teaching wasn’t something that came out of the Second Vatican Council, this was from St. Peter, he added, and St. John Paul knew that and prayed.

St. John Paul was close to the people, going out, traveling across the world to find them and be close to them, Pope Francis said.

The third thing St. John Paul had was his love of justice — social justice, justice for the people, justice that could eliminate wars, a justice that was complete, which is why he was a man of mercy, the pope said, “because justice and mercy go together.”

“They cannot be separated, they are together: justice is justice, mercy is mercy, but one cannot be found without the other,” Pope Francis said.

The Polish saint did so much to promote the devotion to Divine Mercy because he knew that God’s justice had “this face of mercy, this attitude of mercy.”

“This is a gift that he has left us: justice-mercy and just mercy.”

The Mass at St. John Paul’s tomb was scheduled to be the last of Pope Francis’ early morning Masses to be livestreamed online; with churches opening in Italy and elsewhere, the pope encouraged people to attend Mass in their local parish communities while respecting health norms.