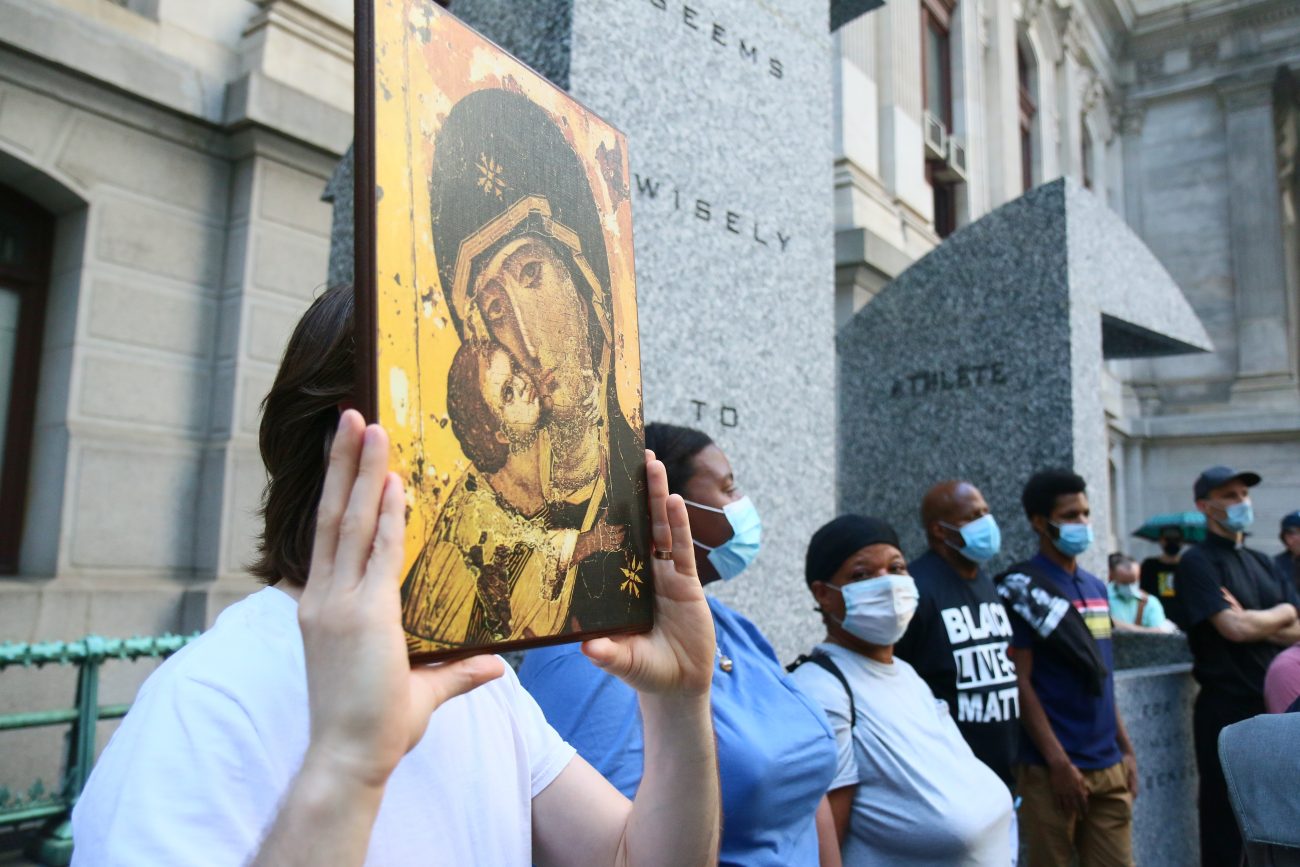 A participant in a June 7 rosary prayer walk through downtown Philadelphia displays an icon of Mary at City Hall's Octavius Catto memorial, where some 200 concluded a two-hour recitation of all four sets of rosary mysteries. Event organizer David Sao of the Culture Project said the gathering was intended to "scream out to our mom" for "peace and healing." (Photo by Sarah Webb)

Some 200 area faithful took to the streets of downtown Philadelphia on Sunday afternoon, June 7 for a “Rosary Walk for Healing and Peace” in a city and nation beset by disease and division.

The two-hour procession was led by Father Dennis Gill, director of the archdiocesan Office for Divine Worship and rector of the Cathedral Basilica of SS. Peter and Paul, which was the starting point for the event.

“We come together to pray for many things today,” said Father Gill, stressing the intercessory power of Jesus before God the Father, and of Mary “who brings all of our needs to her divine Son.”

Before setting out, attendees recited the chaplet of Divine Mercy, led by event organizer David Sao of the Culture Project, a Wynnewood-based young adult ministry. Sao knelt on the steps of the cathedral throughout the chaplet, with several others doing the same on the pavement and street behind him.

Archbishop Nelson Perez joined the participants for the length of the walk, as did Archbishop Borys Gudziak, metropolitan archbishop of the Ukrainian Catholic Church in the United States, and Philadelphia Auxiliary Bishop Edward Deliman.

(Watch a video of the June 7 Rosary Walk for Healing and Peace.)

Wearing face masks, priests, women religious and laity of all ages walked in the procession, which was accompanied by a Philadelphia Police Department escort.

Prior to the departure from the cathedral, Archbishop Perez greeted the police detail and offered a blessing, which “gave a little bit of peace” amid a week of widespread civil unrest, said Captain Stephen Clark. 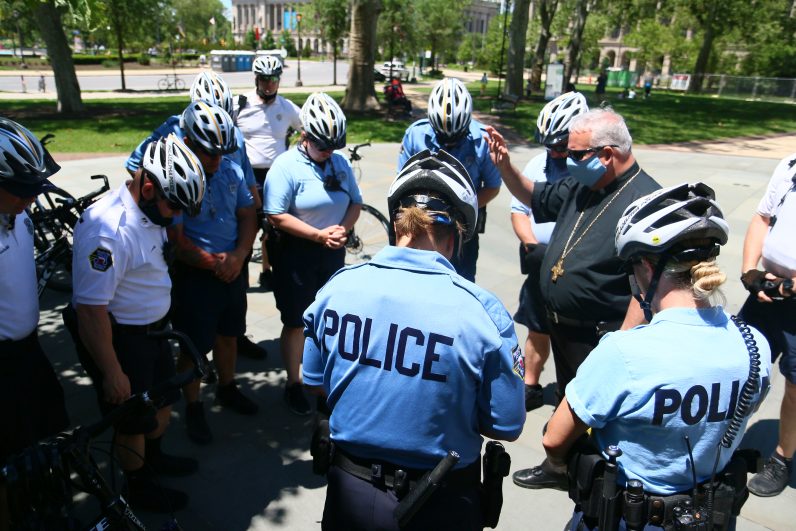 “A lot of us are lifelong Catholics, so it does have a great spiritual meaning for us,” said Capt. Clark, a member of St. Cecilia Parish in the city’s Fox Chase section.

The procession — during which all four sets of rosary mysteries were recited — wound past City Hall and continued down streets closed to traffic.

The locations “meant a lot for our African American brothers and sisters,” said Sao. “Their story matters to our story.”

At Independence Hall, Cathedral Choir soprano and cantor Marcelle McGuirk chanted the “Ave Maria,” after which Father Gill advised the crowd that “there was so much to pray for,” noting that police had revived a bystander overdosing on heroin as the procession had traveled down Market Street.

Participants also recited the Litany of the Sacred Heart, since “June is the month of the most Sacred Heart of Jesus,” said Father Gill.

Focusing on Christ’s heart and on our own is essential in healing society, said Archbishop Gudziak.

“The Lord is waking up the world,” he said. “We can’t overcome the sinfulness of our human nature without God’s grace, and so we pray. We need to convert and treat each other with dignity — black, white, brown, male, woman, handicapped, non-handicapped, born and unborn. That is our vocation and our prayer.”

Sao added that “bringing prayer to the streets” in times of distress was also vital.

“St. John Paul II, under communism and occupation in Poland, would process with an icon of Our Lady, as we did this afternoon,” said Sao. “We just want to bless every corner of the city.”

The rosary is a perfect prayer for this mission, he said, since “in times of trouble we scream out for our mom.”

George Floyd, who was killed May 25 under Minneapolis police restraint, did just that in a video capturing his final minutes, in which he called out for his late mother as he died.

Sao said the rosary walk, which concluded at the Catto memorial with a blessing from Archbishops Perez and Gudziak, was a moment to invoke Mary, the mother of all.

“I just wanted to scream out to our mom, for prayers and for help to bring us back to her Son, who is just love and mercy,” he said. 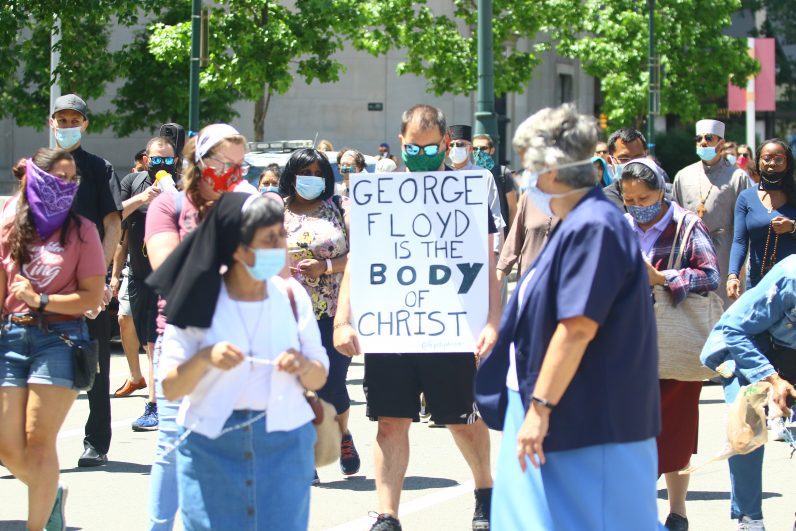 A participant in a June 7 rosary walk through downtown Philadelphia displays a sign showing solidarity with George Floyd, who died May 25 under Minneapolis police restraint. Footage of Floyd’s death has sparked international outrage and calls for an end to systemic racism, healing for which was a key intention in the June 7 prayer gathering. (Sarah Webb)

NEXT: Meet the 13 men to be ordained deacons June 13 at cathedral