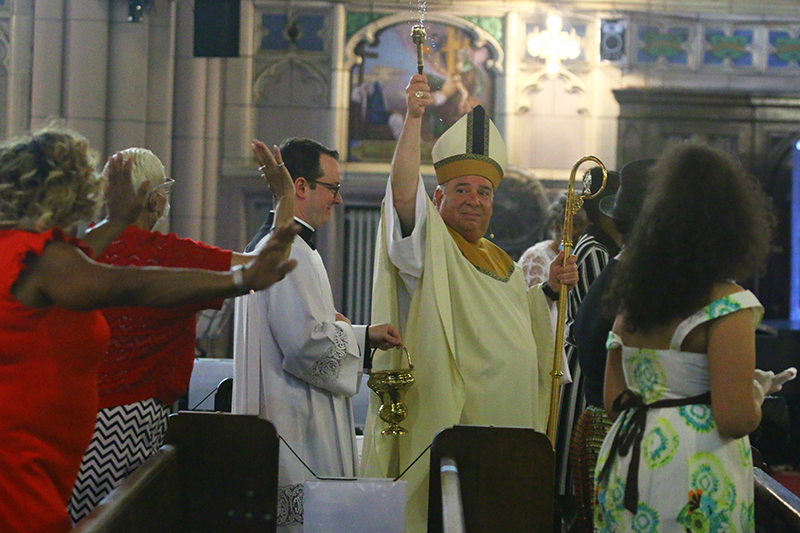 Archbishop Nelson Perez blesses parishioners with holy water during Mass Sunday, June 7 at St. Martin de Porres Parish in North Philadelphia, his first public liturgy in more than 11 weeks due to COVID-19. In his homily, the archbishop pointed to the Trinity as the source of healing for the wounds caused by the coronavirus pandemic and systemic racism, both of which have rocked communities worldwide. (Photo by Sarah Webb)

At his first public Masses in more than 11 weeks, Archbishop Nelson Perez pointed to the Trinity as a source of strength and renewal amid an unprecedented time of challenge.

With COVID-19 restrictions eased under Pennsylvania’s yellow phase, most parishes in the Philadelphia Archdiocese resumed public liturgies the weekend of June 6-7, which marked the Solemnity of the Most Holy Trinity.

Public Masses were suspended March 18 as part of statewide and national efforts to contain the spread of the deadly coronavirus, which to date has infected more than 7 million and killed over 400,000 worldwide.

On Sunday, Archbishop Perez celebrated a 9 a.m. Mass at St. Martin de Porres Parish in North Philadelphia. Speaking to some 75 parishioners — who sat six feet apart and wore face masks — the archbishop said “God in his innermost being is a family,” and celebrating this mystery as a faith community is essential, especially given the dual pandemics of the coronavirus and systemic racism.

“It is so good to finally, finally be able to gather together in celebration of the Eucharist,” said Archbishop Perez, admitting that he was “tired, tired, tired of standing in front of an empty cathedral every Sunday” as liturgies were livestreamed to thousands he could not see.

“How we need this moment now,” he reflected, describing the pandemic as a “scary, ambivalent” time that was compounded by the death of George Floyd while under Minneapolis police restraint.

Deploring the injustice of Floyd’s death as well as the “destructive behavior” that accompanied some protests, the archbishop said that “we have (nonetheless) been surrounded by hope in the midst of this despair.”

Although believers in Christ have “ups and downs,” said Archbishop Perez, “the Christian is the person who is able to find hope” even in times of great suffering because of Christ’s victory over death itself.

The archbishop cited “lots of signs” of such hope in the current moment of crisis, including the presence of “hundreds of thousands of people who gathered” at protests in the wake of Floyd’s killing “and said to this country, ‘This is not who we are.’”

He was also moved by the volunteer efforts of those who helped business owners to clean up after recent riots and looting.

“It brought tears to my eyes to watch … people showing up all over the city with bags and brooms and boxes to help their neighbors put their lives back together,” he said.

Drawing on St. Paul’s letter to the Romans (8:28), Archbishop Perez stressed that Floyd’s death “will not be in vain,” and that “God can turn evil into good, because he is more powerful than evil.”

Ultimately, he said, God alone can heal the wounds of racism through the humility and conversion called for by the U.S. bishops’ pastoral letter on racism, “Open Wide Our Hearts.”

During his homily, Archbishop Perez — who chairs the U.S. bishops’ committee on cultural diversity in the church — read a key passage of the letter, which states that “racism is a moral problem that requires a moral remedy,” and a “transformation of the heart that impels us to act.”

The grace of God, for whom “all things are possible (Mt. 19:26) … forgives and restores us to … relationships and heals the wounds between us,” read Archbishop Perez, as congregants broke into applause. 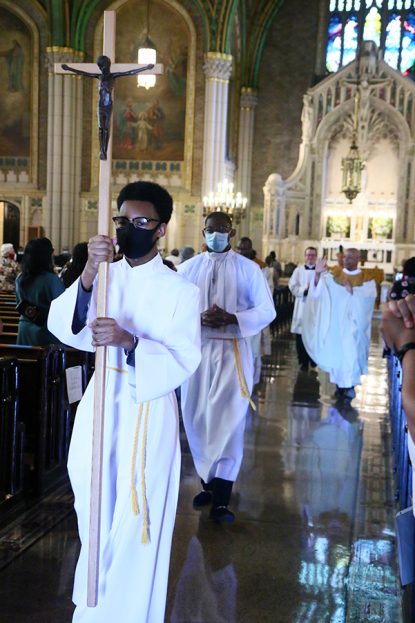 Altar servers Joshua Brooks and Brian Caldwell Jr. lead the procession at the end of Mass celebrated by Archbishop Nelson Perez on Sunday, June 7 at St. Martin de Porres Parish in North Philadelphia. Shown in the background of the procession is the parish’s pastor, Father Stephen D. Thorne. (Sarah Webb)

Civil rights pioneer Dr. Martin Luther King Jr. had been given a divinely inspired dream of racial equality, said the archbishop, emphasizing that “dreams cannot be abandoned, because they fuel our heart, they fuel our passion.”

The archbishop reiterated his message of hope rooted in faith shortly thereafter at the Cathedral Basilica of SS. Peter and Paul, where Mass was offered later that same morning for all students in the five-county archdiocesan area as the academic year closed.

At both liturgies, Archbishop Perez’s message of hope and healing resonated with faithful.

As an African American youth, Caldwell said eradicating racism is not a matter of ignoring differences but embracing and honoring them.

His mother April, who fears her son could be harmed if he were ever pulled over for traffic stop, said “color is a thing, but it doesn’t mean it’s a bad thing.”

The key, she said, “is not to pass judgment once you do see that color.”

“To sing … is part of our African American heritage,” said Dorsey, who also oversees the Philadelphia Catholic Gospel Mass Choir. “Part of our praise is our music.”

Two choir members were both African American and members of law enforcement: Philadelphia Patrol Officer Jennifer Allen performed “Heal Our Land” prior to the Mass, and retired Philadelphia Police Officer Doug Stanford was the principal soloist for “Lamb of God, Lead Me,” an original composition by Dorsey.

Echoing one of Archbishop Perez’s favorite sayings, St. Martin de Porres pastor Father Stephen Thorne said that “the Holy Spirit is working in, through and despite North Philly.”

Gathering again for Mass was “like Easter,” she said, and the present is “a time when people really need to unite, pray together, and come up with a way to heal and to move forward.” 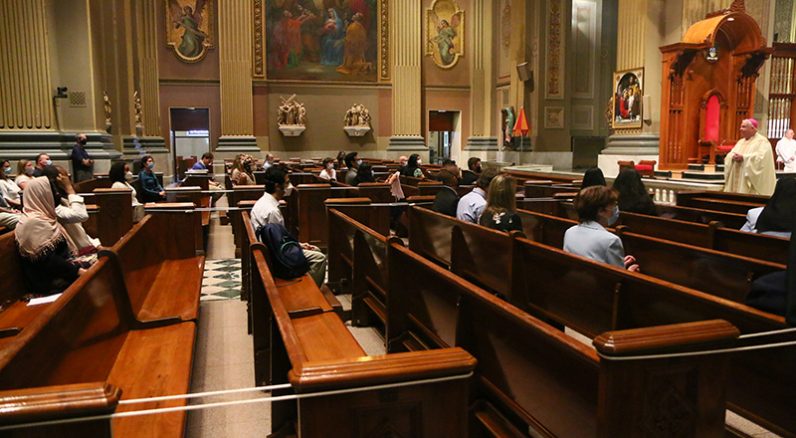 Participants at the first public Mass celebrated in the Philadelphia Archdiocese in 11 weeks, sitting at a social distance and wearing face masks, listen to Archbishop Perez’s homily during the 11 a.m. Mass Sunday, June 7 at the Cathedral Basilica of SS. Peter and Paul, Philadelphia. (Photo by Sarah Webb)