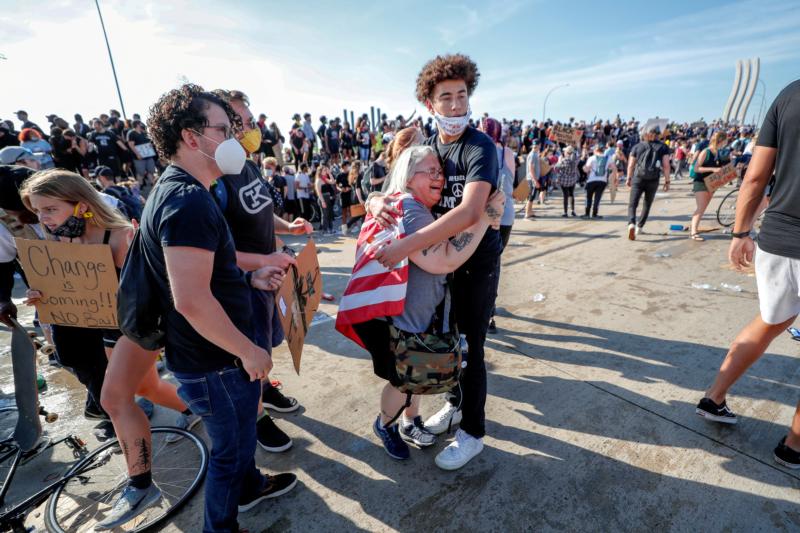 A woman in Minneapolis is comforted after a tanker truck drove into thousands of protesters marching on I-35 West May 31, 2020. Demonstrations continue after a white police officer in Minneapolis was caught on a bystander's video May 25 pressing his knee into the neck of George Floyd, an African American, who later died at a hospital. (CNS photo/Eric Miller, Reuters)

ST. PAUL, Minn. (CNS) — For three hours on the morning of May 30, Father Joe Gillespie walked Lake Street in Minneapolis, surveying the destruction in his neighborhood.

The Walgreens store only a block from his parish church, St. Albert the Great, was a burned-out shell, its ceiling completely collapsed. Plywood covered most business’ windows, either because they had been smashed out, or to protect them from further vandalism. Graffiti covered buildings’ facades, some of it memorializing George Floyd, an African American man who died while in the custody of a white police officer during an arrest on Memorial Day.

One of his favorite restaurants, Midori’s Floating World Cafe, had been set ablaze, and he talked to the owners as they were cleaning up the mess. A day earlier, they had posted online that they didn’t know if they would be able to reopen, and thanked their customers for the support over the 17 years they’d been there.

“They were literally in tears,” said Father Gillespie, a Dominican priest, standing in St. Albert’s narthex in red vestments following a Pentecost vigil Mass. “Their place was just destroyed. All the windows were broken.”

The day before, a fellow Dominican, Brother Peter Lewitzke, described a similar walk he had taken with Dominican Father Jerry Stookey, pastor of nearby Holy Rosary Church.

“It really does shake you to have to walk through that,” said Brother Lewitzke, who recently finished a yearlong internship in campus ministry at the University of St. Thomas in St. Paul.

He walked past businesses he has visited, including a barber shop whose owner he has gotten to know. “He gives free haircuts to homeless people,” he noted in an interview with The Catholic Spirit, newspaper of the Archdiocese of St. Paul and Minneapolis.

The barber shop’s windows were smashed, as were those in a nearby library.

“That upsets me,” he said, “but I think the important thing is that we don’t allow all of that to dismiss what started this in the first place. We can’t let the cycle of violence and anger continue endlessly.”

St. Albert and Holy Rosary are the closest parishes to the Minnehaha Shopping Center, where the riots began May 26 with the looting of Target and the first fire at AutoZone. And, after three nights of chaos in the city, including protesters’ destruction of the Minneapolis Third Precinct police building, Father Gillespie said people in the neighborhood felt abandoned by police and uncertain about the future.

The largest deployment of the National Guard in Minnesota history brought order to the city that night, but in the evening, St. Paul and Minneapolis residents were preparing for the worst. The interstate highways closed at 7 p.m., and curfew began at 8 p.m. In south Minneapolis, residents were instructed to fill bathtubs and trash bins with water and keep garden hoses ready in case they needed to extinguish fires, turn on their lights, and, if they felt comfortable, sit in their yards to discourage vandalism.

Karen Bohaty, 69, a St. Albert parishioner who lives in south Minneapolis, said she was aghast at what happened to Floyd, but was angry about the related riots and the destruction across the Twin Cities. She had questioned whether it would be safe to attend Mass that night, the first time the parish was celebrating a public Mass since mid-March, due to the coronavirus pandemic. She was relieved the church hadn’t been vandalized.

Not all churches were so lucky. At the Basilica of St. Mary on the outskirts of downtown Minneapolis, a small interior fire damaged a few pews, Father Gillespie said. Basilica director of marketing and communications Mae Desaire confirmed to The Catholic Spirit the basilica received minor damage overnight May 28, but wouldn’t speak to the details.

“At this time, we pray for peace and healing in our city,” she said in a prepared statement.

Throughout the day May 30, people from across the Twin Cities flocked to Lake Street to help clean the rubble.

Chris Damian, 29, a parishioner of St. Thomas More Church in St. Paul, headed to the clean up on his bike, but accepted a ride from a woman who stopped when she noticed he had a broom. “Because when the worst comes to the Twin Cities, the best comes out of the Twin Cities,” he posted on Facebook.

Father Paul Shovelain, the 32-year-old pastor of St. John the Baptist Church in New Brighton, Minnesota, also spent time that day cleaning up on Lake Street. Wearing clerics, a mask and a backward sun visor with “MPLS MINN” across the band, he prayed an Our Father, Hail Mary and Glory Be via Facebook Live for “our world, our newly ordained priests” — May 30 was ordination day in the Archdiocese of St. Paul and Minneapolis — “and for the repose of the soul of George Floyd.” 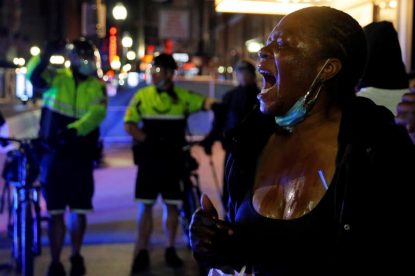 A protester in Boston screams after being affected by a chemical agent used by metro police May 31, 2020. Demonstrations continue after a white police officer in Minneapolis was caught on a bystander’s video May 25 pressing his knee into the neck of George Floyd, an African American, who later died at a hospital. (CNS photo/Brian Snyder, Reuters)

Behind Father Shovelain was Cup Foods, the site where Floyd was arrested and, while handcuffed on the ground, repeatedly said, “I can’t breathe” and called out for his mother, while Minneapolis police officer Derek Chauvin, who is white, knelt on his neck, even as bystanders pleaded for the officer to let him breathe. He continued to kneel on Floyd, even after Floyd became unresponsive. A bystander filmed the incident and shared it on social media.

Floyd was later pronounced dead at Hennepin County Medical Center. Chauvin and three other officers involved were fired. Chauvin was arrested May 29 and charged with third-degree murder and second-degree manslaughter. The three other ex-officers have not been arrested.

Twin Cities-area Catholics are among Minnesotans still processing the horror and tragedy, and grappling with their role — and the Catholic Church’s — both in fighting racism and rebuilding the city.

St. Joan of Arc Church in south Minneapolis planned to hold a virtual prayer service June 2. The church is located just a mile-and-a-half from Cup Foods, the convenience store where Floyd was accused of trying to pass a counterfeit $20 to buy cigarettes around 8 p.m.

Cynthia Bailey Manns, the adult learning director at St. Joan of Arc, who was scheduled to co-lead that prayer service, said May 29 it took two days for the reality of Floyd’s death to sink in. It reminded her of other recent police-involved deaths of unarmed black men.

“There’s that sense of denial — here we go again. This can’t be real. How many? How many more times?” she asked. “And then it was just a sense of heaviness.”

For a while, her prayer has been “Lord help us, and how much longer?”

“It dawned on me yesterday,” she said, “that God is saying the same thing: ‘I have given you all that you need to figure this out. I’ve gifted you with reasoning, intellect, compassion, empathy … love, all the things you need to figure out how to live with each other and to honor the sanctity of life. I’m weeping with you, because you guys are really struggling to figure this out and learn from the lessons of the past.'”

Floyd’s death is part of a “400-year-old struggle,” said Manns, who is African American, referring to the beginning of slavery in America.

“When you watch a man die on a video, and it’s not the first time we’ve seen this. … Two months ago, the man who was jogging gets shot. We watched him die,” she said. “Remember, this is a part of our history. We have watched our ancestors be lynched. We have watched them be killed and dragged from trucks. All of that is in our legacy. There’s trauma. And when something like this happens, it stirs it all up again.”

Those interviewed drew a distinction between people justifiably protesting Floyd’s death — mostly peacefully — and opportunists who spearheaded the looting and arson. However, Manns said she could understand the anger, although she made clear she didn’t condone the vandalism now rampant in many major U.S. cities.

“I understand that sense of, ‘How many times can you say something and hope someone would hear it?’ and not only is it discounted, but you as a human being are discounted,” Manns said.

Manns holds a doctorate of ministry in spiritual direction and is the coordinator of the Spiritual Direction Certificate Program and is a member of the theology faculty at St. Catherine University in St. Paul. She said she would like to see the local church provide more resources for ministry to black Catholics, and she has been involved in trying to revive an archdiocesan initiative.

Brother Lewitzke believes change is needed on individual and structural levels, and through the love of Christ. Racism can’t simply be reduced to a social issue, he said.

Wiering is editor of The Catholic Spirit, newspaper of the Archdiocese of St. Paul and Minneapolis. Staff writer Barb Umberger contributed to this story.

NEXT: Amid protests, bishops express sorrow over Floyd killing, racism