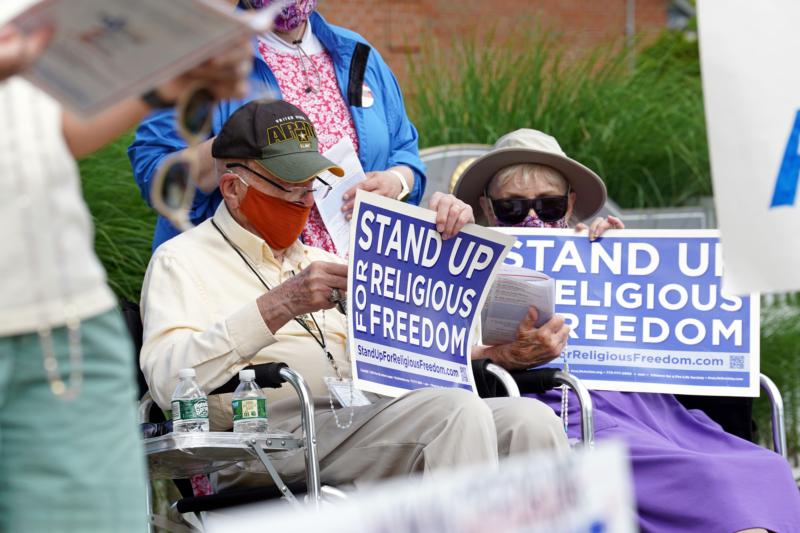 WASHINGTON (CNS) — The unpredictability of the COVID-19 pandemic and its effect on group gatherings and recent court rulings are part of a growing challenge to religious liberty, said participants in an online symposium June 22.

During the event sponsored by the Archdiocese of Kansas City, Kansas, speakers said that the path ahead is uncertain as government authorities balance public health with congregations’ needs for communal worship, as well as court rulings at odds with religious beliefs about sexuality.

“Law has a pedagogical function. It teaches people,” said Elizabeth Kirk, a legal scholar and director of the St. Lawrence Center’s Institute for Faith and Culture. “So people now think abortion and same-sex marriage are OK.”

Further, she observed, “religious freedom has become basically a defensive posture. What we keep asking for is an exception. … So we use religious freedom as a shield, to protect our beliefs,” with the consequence, “They think of (us) as bigots.”

“We’ve been dealt some pretty devastating blows by the law and the culture in the last 40 years,” Kirk said. “We need to be able to articulate what the truth of these beliefs are.”

Deacon Bill Scholl, the moderator, bemoaned the “subtle eroding” of religious freedom. “We’ve seen that debate in the time of COVID come to the forefront,” said the deacon, who is a social justice consultant for the Kansas City Archdiocese.

Two weeks later, the governor rescinded that order for a new one, 20-18, which specifically mentioned worship; more than 10 could be permitted, such as lay readers and musicians, if social distancing were mandated. Kelly cited three known instances of community spread traced to church services.

But that order has been on hold after a federal judge, in a case brought by two Baptist congregations, granted a temporary restraining order.

“Public Masses in Kansas had already stopped by that time,” Weber said. “We were OK with her executive order, until she sort of singled us out,” while permitting abortion clinics to remain open. “So it was a little bit of a short-lived hassle, if you will, with the governor’s office. The fact of the matter is, we are the ones who make the decisions at the end of the day in our churches.”

“I think it’s really important to acknowledge … this is an unprecedented time,” Kirk said. Many stay-at-home orders have “reflected a fundamental error. We don’t think that the common good is just instrumental. Meaning, those that help us achieve our final ends. We think of the common good as something richer.”

“Where the church itself demonstrates a concern for the common good,” she said, “it’s more likely that a compromise is likely to be worked out.”

The Supreme Court’s June 15 ruling asserting that law prohibiting employment discrimination on the basis of sex also extends to gay and transgendered individuals “did not deal with religion directly,” Kirk said, and “opens the door to all kinds of lawsuits” and the federal level, and could even threaten the viability of women’s and girls’ sports covered under the Title IX federal civil rights law, which passed as part of the Education Amendments of 1972.

But Justice Neil Gorsuch, who wrote the majority opinion, didn’t address that, writing: “We are also deeply concerned with preserving the promise of the free exercise of religion enshrined in our Constitution; that guarantee lies at the heart of our pluralistic society. But worries about how Title VII may intersect with religious liberty are nothing new; they even predate the statute’s passage.”

The Supreme Court has not yet issued a ruling in Fulton v. City of Philadelphia, the challenge by Catholic Social Services to the city’s policy of cutting off foster-children referrals because CSS will not certify same-sex couples as foster parents due to Catholic teaching that upholds traditional marriage as being between one man and one woman.

He outlined “three pillars of our human and civil rights: Human dignity — that we all have a right to life, that we’ve been created by God as the creator, and lastly, that we have a right to think consistent with the dictates of our conscience. There’s no social justice without these three.”

The “most egregious” COVID-19 dispute Brown cited was in Howard County, Maryland, in which the county executive issued an order that allowed religious worship, but specifically banned consumption of food and drink during worship, which would have prohibited holy Communion. The ban was lifted in late May after the Archdiocese of Baltimore expressed “serious concerns” about it.

“It just shows you where we’re at,” Brown said. “”Too much of our country has turned away from God.”

“Too much of the public health apparatus … believes in things that are specifically opposed to Catholic social teaching,” he added. “We have to use what God has given us … to help us to discern what’s going on, what should I trust, and how do we go forward.”

NEXT: Uncertain times are a call to build a better world, bishop tells police