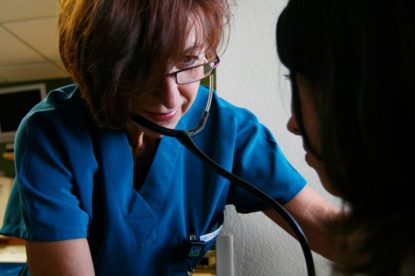 A nurse listens to the heartbeat of an unidentified woman at St. Joseph’s Hospital and Medical Center in Phoenix. (CNS photo/J.D. Long-Garcia, The Catholic Sun)

WASHINGTON (CNS) — The chairmen of three U.S. bishops’ committees welcomed a final rule implemented by the Trump administration June 12 to restore “the long-standing position of the federal government that discrimination on the basis of ‘sex’ means just that and does not refer to ‘termination of pregnancy’ nor ‘gender identity.'”

This final rule replaces the Obama administration’s Health and Human Services rule issued in 2016 — and vacated by a court last October — that revised the definition of “sex” in the civil rights provision of the Affordable Care Act known as Section 1557.

Section 1557 provides that individuals cannot be subject to discrimination based on their race, color, national origin, sex, age or disability. Under the Obama administration’s rule, this section included “gender identity” and “termination of pregnancy,” and HHS regulations governing its implementation had no exemption for religious organizations.

The Trump administration’s final rule, first proposed in May 2019, “will help restore the rights of health care providers — as well as insurers and employers — who decline to perform or cover abortions or ‘gender transition’ procedures due to ethical or professional objections,” the bishops said in a statement released late June 12.

“Catholic health care providers serve everyone who comes to them, regardless of characteristics or background. However, there are ethical considerations when it comes to procedures,” they said. “We greatly appreciate today’s important action.”

“These modifications are consistent with the legislative intent of the Affordable Care Act — to ensure no one is discriminated against in health care because of their sex,” the bishops added.

Under the Obama-era rule, Catholic hospitals and health care providers were required to perform or provide gender transition services, hormonal treatments and counseling as well as a host of surgeries that would remove or transform the sexual organs of men or women transitioning to the other gender. It also required group health plans to cover these procedures and services.

The regulations also mandated abortions be performed and affected health insurers, hospitals and health plans administered by or receiving federal funds from HHS.

“Abortion is not health care and should never be mandated by the government,” said the organization’s president, Marjorie Dannenfelser, adding that President Barack Obama and Vice President Joe Biden “sought to expand abortion at every turn, even trying to reinterpret federal law to define abortion as a civil right.”

“We thank President Trump and (HHS) Secretary (Alex) Azar for standing firmly on the side of the majority of Americans who reject taxpayer funding of abortion, and for the action taken today to roll back the Obama/Biden-era assault on conscience,” Dannenfelser added in a June 12 statement.

Luke Goodrich, vice president and senior counsel at Becket, a religious liberty law firm in Washington, said: “No doctor should be forced to perform a procedure she believes would harm a patient. The new rule will help ensure that all patients receive top-notch care without forcing doctors to perform potentially harmful procedures in violation of their religious beliefs and medical judgment.”

In 2016, when the Obama administration issued the mandate that revised the definition of “sex” in Section 1557 of the Affordable Care Act, two lawsuits were brought against it, filed by nine states, several religious organizations and an association of over 19,000 health care professionals.

Goodrich added in his June 12 statement: “Our clients look forward to continuing to serve all patients, regardless of their sex or gender identity, and continuing to provide top-notch care to transgender patients for everything from cancer to the common cold.”

PREVIOUS: No evidence found of improprieties by national shrine rector