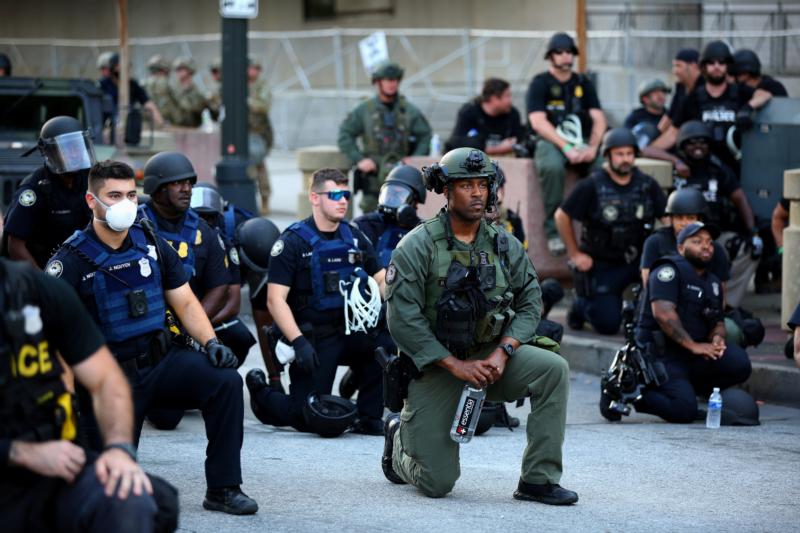 Police officers in Atlanta kneel with protesters June 1, 2020. Demonstrations continue after a white police officer was caught on a bystander's video May 25 pressing his knee into the neck of George Floyd, an African American, who later died at a hospital. (CNS photo/Dustin Chambers, Reuters)

WASHINGTON (CNS) — A panel of police and civil rights activists suggested numerous ways to reform the nature of police work in the United States during a June 11 forum sponsored by Georgetown University Law School.

If police officers commit crimes while on duty, as has been alleged in the May 25 death of George Floyd in Minneapolis, “the court has put up a number of hurdles to make it difficult to bring injunctive relief against an entire police department,” said Christy Lopez, a Georgetown Law professor and co-director of the its Innovative Policing Program.

By comparison, if a truck driver is responsible for a fatal accident, the driver’s company can be sued, said Lopez, who prior to coming to Georgetown, was deputy chief in the Special Litigation Section of the federal Justice Department’s Civil Rights Division.

Lynda Garcia, director of the policing program at the Leadership Conference on Civil and Human Rights, looked at legislative approaches to reforming policing during the forum, “Transforming the Police.”

States should adopt a “use of force” standard, Garcia said, permitting police to apply it only when necessary. “Now, they’re allowed to use it when it’s not necessary; all it has to be is ‘reasonable,'” Garcia said.

She cited the Eric Garner Act, named after the victim of a police chokehold in 2014 who, like Floyd, also told the officer restraining him, “I can’t breathe.” “George Floyd’s murder has really bought this back up,” Garcia said, adding that a law should ban “any maneuver that restricts the flow of blood or oxygen to the brain.”

Other measures Garcia advocated, including a ban on racial profiling and the collection of data on racial profiling, and for a national police officer misconduct database, which she said should “be made public whenever an officer is terminated.” Too often, she added, such cops are hired by “the department the town over” after being fired from their original police force. “This creates a huge accountability issue.”

“The United States has the most decentralized system of law enforcement in the world,” said Ronald Davis, former police chief of East Palo Alto, California, who headed the 2014-15 White House Task Force on 21st Century Policing. “We don’t even know how many we’ve got.” Estimates put the figure between 16,000 and 18,000 police agencies. The United Kingdom, by comparison, has about 50 police agencies.

“We need policing to be a profession, like you guys are attorneys,” he said to Lopez and Garcia. “If you don’t meet that standard, you can be disbarred,” Davis added, but it doesn’t happen that way with police.

Were his appendix to burst, he said, treatment would “work the same way in New York or Los Angeles or Chicago — I hope.” But when it comes to policing, “they do not do the research, they do not have the best practices.” To get the “continuum of learning” Davis seeks “will take a very long time to do,” he said.

Asked if reform was a worthwhile project, Davis replied, “I’m not going to answer this as 30-year veteran of law enforcement. I’m going to answer this as a black man. We don’t have an option. We cannot continue to harm communities of color. … We need change, and we need it as soon as possible. We know it’s not going to take (place) overnight. But we got to get out of our comfort zone.”

“Those of us were both appalled at the actual murder (of Floyd) itself, but (also) at the officers who stood by,” said Martin Haiman, executive director of the professional development bureau of the of D.C. Metropolitan Police Department in the nation’s capital.

“We’ve made dramatic changes in who we recruit” over the past two decades, Haiman said, “and other changes to what the community expects.”

He added, “It starts with who agencies hire. The agency has to mirror the community it serves. Otherwise, Haiman added, “there’s where the building block for trust begins to fall apart.”

The D.C. Council ushered in emergency reforms in a package approved unanimously June 10. Those include making it easier to fire officers for misconduct and to publicly release the names of officers involved in deadly confrontations as well as body-camera footage of such incidents. Other practices already forbidden by the city’s police, such as chokeholds and the use of rubber bullets and chemical irritants, are now unlawful. The measure is good for 90 days while the council prepares a permanent bill.

In Louisville, Kentucky, the City Council passed a bill banning “no-knock” raids. It was during one such raid in March that Breonna Taylor was killed by police when they entered her apartment looking for drugs — they were at the wrong address — and her boyfriend, thinking he and Taylor’s residence was being broken into, shot at the unseen intruders. Taylor also was a focus of the wave of protests that cascaded throughout the country.

“I thought consent decrees were what it would take” to fix policing, Lopez said. While it helps — the police force in Ferguson, Missouri, where teenager Michael Brown was shot by an officer in 2014, has shrunk in size but is now nearly half-black with its first eight women on the force — “a lot of police work comes from outside policing,” she noted.

Moreover, 25 police departments were under consent decrees, Lopez said, with thousands of others left untouched. “We have seen what happens over the past three years when you put all your eggs in the DOJ” when presidential administrations change, she noted.

Police also get conflicting messages. “There’s a lot of gun violence. That violence kills young black men. We absolutely want to eliminate that. Officers are rewarded if they get guns off the street,” Lopez said. “They understand the way to do that is to stop a lot of people. … If I have to stop 100 cars to get one gun, that’s great. I’ll do it. But the other 99 people are going to be mad.”