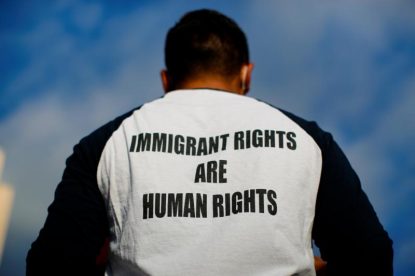 An immigration advocate is seen in San Diego June 18, 2020. The U.S. has suspended some visas and extended immigration restrictions. (CNS photo/Mike Blake, Reuters)

WASHINGTON (CNS) — Catholic organizations have joined others in protesting some of the latest immigration restrictions issued by the Trump administration, including a popular visa program now suspended until the end of the year.

The Trump administration said it was taking the actions to protect U.S. workers who have lost jobs because of the coronavirus crisis. The order issued June 22 blocks the popular H-1B visa for highly skilled workers, among many other work visas, and extends a previous freeze on permanent residency cards, popularly known as green cards, until the end of the year.

“Under the extraordinary circumstances of the economic contraction resulting from the COVID-19 outbreak, certain nonimmigrant visa programs authorizing such employment pose an unusual threat to the employment of American workers,” said President Donald Trump in the “Proclamation Suspending Entry of Aliens Who Present a Risk to the U.S. Labor Market Following the Coronavirus Outbreak” order issued by the White House.

Visas for seasonal workers, including those on work-study summer programs, and for au pairs, summer camp workers and temporary hospitality industry workers also will be affected.

And though the administration cites a 13.3% unemployment rate in May as a justification, some, like the Catholic Legal Immigration Network Inc., say it is a “thinly veiled attempt to use the COVID-19 pandemic and its economic fallout as cover for the administration’s racist, anti-immigrant agenda.”

In a June 23 statement, CLINIC’s advocacy director, Jill Marie Bussey, said the order will affect family reunification since those wanting to join family members in the country with those visas will not be able to do so.

“The original proclamation and this expansion and extension have nothing to do with COVID-19 or the well-being of Americans,” Bussey said. “This continues the administration’s attacks on family unity and hurts many others. In addition to hamstringing employers, these orders prolong the suffering of those who have already been waiting a long time to reunite with their loved ones.”

But the order says not only do U.S. workers face competition from temporary workers but also from their relatives since they “are often accompanied by their spouses and children, many of whom also compete against American workers.”

“The administration is trying to deceive us by saying if we shut down these visa categories, America’s economic crisis will be alleviated,” said Bussey. “It’s the same as shutting down the border to asylum-seekers in the name of COVID — they’re pushing a false narrative, scapegoating immigrants and failing to actually put in place policies that will mitigate the pandemic’s path of destruction.”

CLINIC officials said they also remain “gravely concerned about the impact of the ban on immigrant religious workers.”

“There has rarely been a time in the history of our country when religious workers have been so needed,” said Miguel Naranjo, director of CLINIC’s Religious Immigration Services. “So many lives have been lost; families need comfort and spiritual guidance to deal with their pain, to try to accept this new reality in which we find ourselves.”

The Washington-based American Immigration Council also condemned the ban, saying it would have “a devastating impact on family members of U.S. citizens and permanent residents in the United States.”

“This is not about public health or the economy,” said Beth Werlin, executive director of the American Immigration Council. “Many of the people the administration is banning are family members of those on the front lines combating the virus. While President Trump says he wishes to reignite our economy, this ban will prevent businesses and universities from filling critical gaps.”

Jessica Vaughan, policy director for the Center for Immigration Studies, which favors many of the administration’s views on immigration, supported the order.

“The work visa suspensions will put the thumb on the labor market scale in favor of U.S. workers,” Vaughan told The New York Times for a June 22 story. “It’s really heartening to see the president stand up to the special interests that pull out the stops to lobby for these visa programs.”

The U.S. Chamber of Commerce CEO Thomas J. Donohue, however, said shortly after the order had been issued that the restrictions amounted to “putting up a ‘not welcome’ sign for engineers, executives, IT experts, doctors, nurses and other workers,” adding that it “won’t help our country.”

“It will hold us back,” Donohue said in statement posted on the chamber’s website. “Restrictive changes to our nation’s immigration system will push investment and economic activity abroad, slow growth and reduce job creation.”

Even before the restrictions were announced, a group of Republican senators, including South Carolina’s Lindsey Graham, urged the president to reconsider, saying some of the restrictions would affect small businesses at a time when they are struggling.

“American businesses that rely on help from these visa programs should not be forced to close without serious consideration,” the senators wrote. “Guest workers are needed to boost American business, not take American jobs.”

The announcement came in a week when the president seemed to be intent on calling attention to his immigration policies and views as he heads into a contentious reelection bid.

On June 23, he traveled near the U.S. southern border in Arizona to highlight progress on one of his 2016 campaign promises, a border wall he said Mexico would pay for but has instead faced financial hurdles from Congress to fund it.

About 200 miles of a new wall system have been built and the president had a plaque with his signature attached to it during his visit.