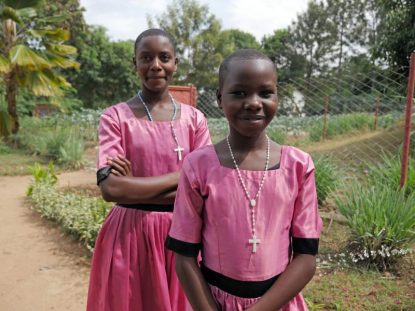 Young women are seen in the garden at the Jipe Moyo center in Musoma, Tanzania. Jipe Moyo, a program of the Musoma Diocese, cares for children who have been living on the street or have been abused. (CNS photo/CNS photo/Sean Sprague, courtesy Maryknoll)

When she was only 8 years old, Ghati was sold by her older brother to a 55-year-old man, who put the orphan on a motorcycle and rode to his house near Musoma, Tanzania. There, the man raped her.

After two weeks of daily assaults, Ghati escaped while the man was working in his fields. On the path to the local village, she met a young woman and appealed for help. The woman, who had legal training, advised Ghati to return to the man’s house and wait until she could come for her that evening.

When the woman arrived that night, she brought the police, who confronted the man. “Oh, no,” the man said. “She’s just my house girl.”

“But you call me your wife,” Ghati said. The man was arrested and eventually sentenced to prison.

Ghati, a pseudonym to protect her identity, was taken to the city of Musoma, on the shore of Lake Victoria, and placed in a shelter under the care of the Immaculate Heart Sisters of Africa.

“What the center does is support vulnerable children,” said Sister Annunciata Chacha, director of the shelter called Jipe Moyo, a Swahili term meaning “To Give Heart.”

Jipe Moyo, a program of the Musoma Diocese, cares for children who have been living on the street; children who run away from domestic violence; children who flee from female genital mutilation (FGM), which is sometimes called female circumcision; and girls escaping from child marriages.

Jipe Moyo shelters 70 minors, most of whom are girls, some as young as 2 years old, who’ve been orphaned or abandoned. One 5-year-old girl was found sleeping on a garbage dump after being kicked out of her house by her stepmother. More than a dozen boys at the center were rescued from the streets. Jipe Moyo also supports more than 50 children at area boarding schools. A few have gone on to college. 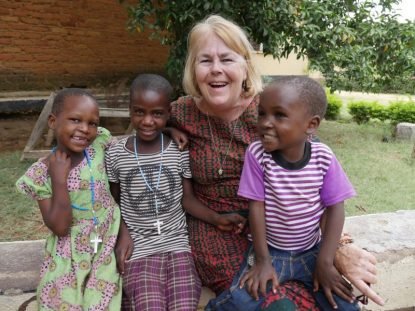 Elizabeth Mach, a Maryknoll lay missioner, poses with children at the Jipe Moyo center in Musoma, Tanzania. The Tanzanian diocese where Mach work supports the center, which cares for children who have been living on the street or have been abused. (CNS photo/CNS photo/Sean Sprague, courtesy Maryknoll)

The center’s location in north central Tanzania is no coincidence. The Mara region of Tanzania, of which Musoma is the capital, has some of that country’s highest rates of child marriage and female genital mutilation, even though both are technically illegal in Tanzania.

In the Mara region, 55% of marriages involve minors under the legal age of 18; many of those involve girls as young as 12 or 13, said Elizabeth Mach, a Maryknoll lay missioner who works as assistant director of the office of planning and development for the Musoma Diocese. That figure compares with 37 percent of marriages involving minors nationally in the East African country.

Similarly, 44% of girls in the Mara region are subjected to genital mutilation, compared with 15% nationally, Mach said.

“So we have child marriages, we have domestic abuse, we have kids running from FGM, we have trafficking of kids, we’ve got everything, and it all comes under that one big umbrella of gender-based violence,” said Mach, a nurse who has spent 44 years in East Africa with the Maryknoll Lay Missioners. Much of her work, especially in the last decade, centers on helping women and combating gender-based violence.

Mach said part of the reason for the high rates of female genital mutilation and child marriages in the Mara area is ethnic and cultural: The dominant ethnic group in the area, the Kuria people, have traditionally practiced FGM as a rite of passage for young girls, making them eligible for marriage. This leads to early marriages and girls as young as 12 becoming pregnant. That results in a high mortality rate for these would-be mothers. For survivors, it can mean painful, long-term and potentially life-threatening health problems.

“Body-wise, they are not ready at all” for pregnancy, she said.

Among other ethnic groups in Tanzania, such as the Luo and the Sukuma peoples, the practice of cutting is not part of their cultures, she said.

“They don’t do FGM, but the abuse of girls and the use of girls sexually is very, very high,” she said.

However, gender-based violence, mostly against women in various forms, is not limited to Tanzania or to East Africa, Mach said. It occurs around the world, including in the United States, where underage marriage remains an issue. According to a 2017 PBS Frontline report that surveyed state marriage records between 2000 and 2015, children as young as 12 or 13 had been allowed to marry in various U.S. states. And the World Health Organization estimates that, annually, 3 million girls around the world face genital mutilation in 30 different countries.

At Jipe Moyo, 17-year-old Mwita said she ran away from home to avoid female mutilation, which her stepfather was insisting she undergo.

“My mom didn’t want me to pass through that stage, but the tribe says that every child must pass that stage,” said Mwita. “So when I tell my mom I won’t do it, she refused to hear me because she knew she would be beaten or even divorced.”

Distressed at the prospect of being cut, Mwita confided to her school headmistress, who, with the school social worker, brought the girl to Jipe Moyo. Today, Mwita is continuing her studies and hopes to become a doctor. Her mother occasionally visits her, but only in secret for fear of being beaten by her husband. Mwita has no contact with the rest of her family.

Even when both the mother and father are against cutting their daughters, the parents can be overruled by other males in the family, such as an uncle or grandfather, Mach said. She cites the case of three girls whose parents brought them to Jipe Moyo. “They were 6, 7 and 9 at the time, and they were brought in to us for protection because the father said, ‘I cannot protect my own children.'”

“When he was just being installed as bishop in 2008, he made a stand against female genital mutilation,” she said. The bishop called on elders in the Mara region to end the practice, and he inaugurated rescue camps to prevent girls from being cut while home during school breaks in November and December.

The first rescue camp in 2008 had 53 girls, Mach said. Last December, more than 600 girls were under protection.

Sister Chacha said despite the horrors Jipe Moyo’s children have escaped, the situation is slowly improving in the area, in part because of educational efforts of the diocese, including educating students and teachers through in-school seminars and outreach workshops for village and community leaders.

But, she added, credit really belongs to girls such as Mwita and Ghati who are standing up and saying “no” to female genital mutilation and to child marriages.

Monahan is editor-in-chief of Maryknoll magazine. The original story can be found in Maryknoll Magazine.

PREVIOUS: No time to claim victory over COVID-19 yet, pope cautions