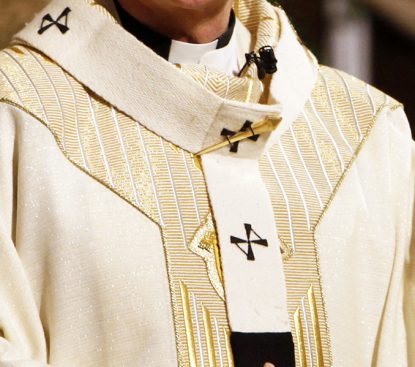 An archbishop wears the pallium, a band of wool worn atop a chasuble, the liturgical vestment of a priest. (CNS photo/Karen Callaway, Catholic New World)

Archbishop Nelson Perez will receive the pallium, a woolen band that symbolizes his closeness to the pope, this Sunday, July 19.

In Catholic tradition, archbishops appointed throughout the world during the previous year travel to Rome to receive the pallium from the pope on June 29, the feast of SS. Peter and Paul.

This year, travel and social restrictions due to the coronavirus pandemic precluded Archbishop Perez from receiving the pallium directly from Pope Francis.

The pope’s ambassador in the United States, apostolic nuncio Archbishop Christophe Pierre, will confer the pallium and preach the homily at the 11 a.m. Mass Sunday at the Cathedral Basilica of SS. Peter and Paul. Archbishop Perez will be the main celebrant.

The livestreamed Mass be viewed here, as well as on the archbishop’s Facebook page.

Additional concelebrants are expected to include the four auxiliary bishops of Philadelphia, Metropolitan Archbishop Borys Gudziak of the Ukrainian Archeparchy of Philadelphia, Bishop Alfred A. Schlert of Allentown, Msgr. Larry J. Kulick of the Diocese of Greensburg and priests of the Philadelphia Archdiocese.

Also expected is Greensburg Bishop Edward C. Malesic, who on Thursday was named the new bishop of Cleveland, the diocese formerly led by Archbishop Perez.

The band, which is made of lamb’s wool and marked by six crosses of black silk and three pins symbolizing the crucifixion of Jesus, signifies communion with the pope and serves as a reminder of the role of the archbishop as shepherd.

NEXT: AbbeyFest moves online for now with weekly concerts