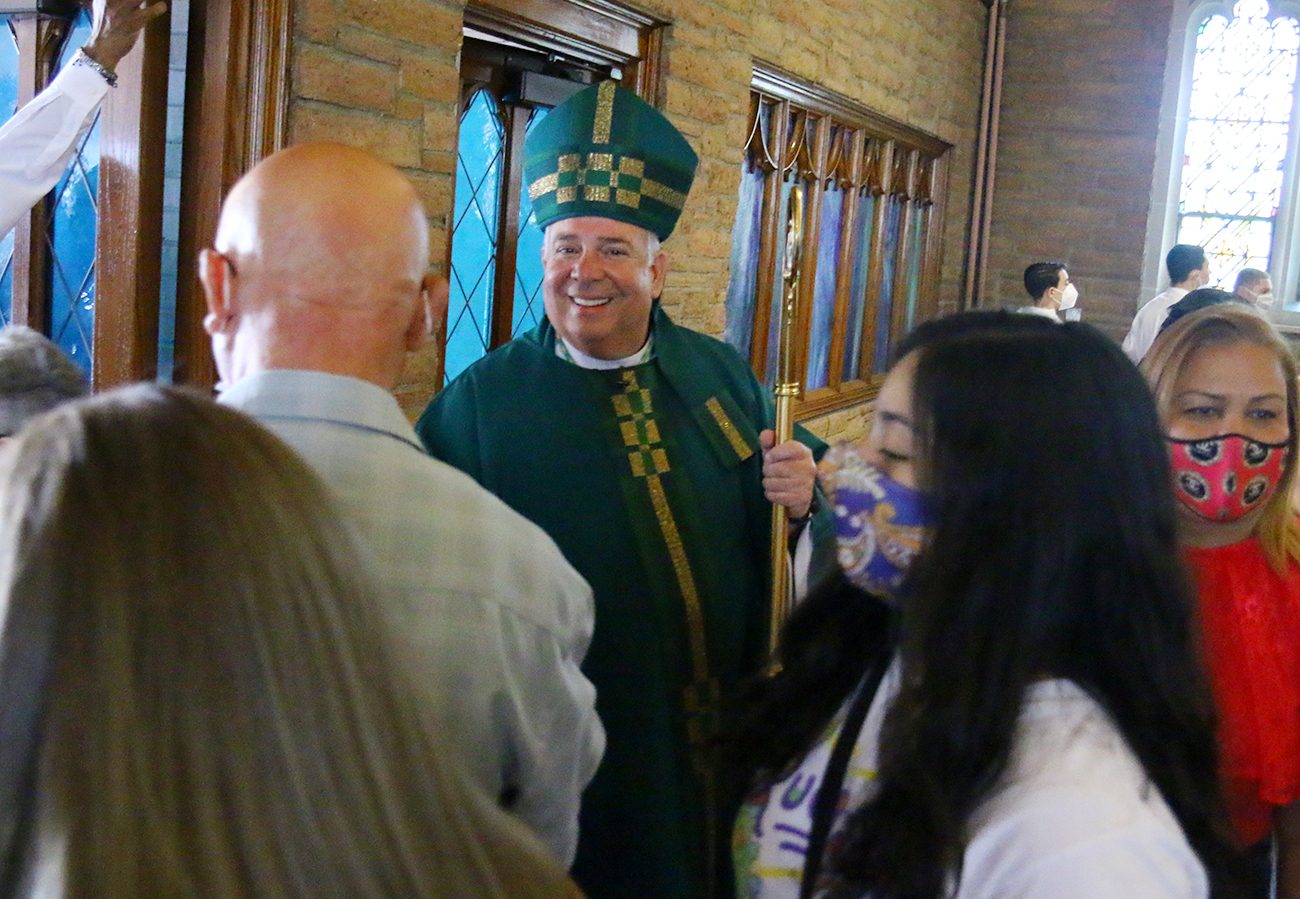 Archbishop Nelson Perez greets parishioners of Holy Innocents Parish after one of two July 26 Masses he celebrated, marking a return to a neighborhood where he spent two decades of his previous ministry as a Philadelphia priest.

Archbishop Nelson Perez returned for a kind of liturgical doubleheader on home field this past Sunday, celebrating two back-to-back Masses at Holy Innocents Parish in Philadelphia.

The July 26 liturgies each drew approximately 175 attendees, who filled the pews under current social distancing guidelines while smiling behind face masks at the priest many remember as “Padre Nelson.”

“I know my way around here; I used to get my hair cut next door,” said Archbishop Perez, noting that he had spent some 20 of his previous 23 years of Philadelphia ministry in the city’s northern neighborhoods of Juniata Park, Olney and Lawncrest.

The 12 p.m. Mass also marked the first liturgy Archbishop Perez has celebrated in Spanish since his return to the Archdiocese.

In both of his homilies, Archbishop Perez noted that the weekend coincided with the eighth anniversary of his episcopal consecration, an appointment that took him off guard.

In 2012, having told his then-congregants at a Pentecost liturgy that “God is a God of surprises,” the archbishop said he “was eating those words two days later” when he was told he was to be made a bishop.

“The surprises have never stopped,” he added, with “the biggest surprise of all” being his 2020 installation in Philadelphia.

“I never thought I would be back,” he admitted, adding that “the only real cheesesteaks” are to be found in Philadelphia.

“And I survived,” said Archbishop Perez.

He also commended the Sisters, Servants of the Immaculate Heart of Mary (IHM) in residence at Holy Innocents, as the order observes its 175th anniversary.

“You look good for that age,” he joked.

The archbishop urged faithful at both Masses to avoid becoming “self-absorbed navel-gazers,” even amid the challenges of the COVID-19 pandemic and social unrest, and to instead focus on the eternal hope offered by Christ’s death and resurrection.

“Pope Francis has said that sometimes we Christians look like we’re leaving a funeral,” he said. “Are you happy? Well, you might want to tell your face.”

Quoting the pope’s 2013 apostolic exhortation, Evangelii Gaudium (“The Joy of the Gospel”), Archbishop Perez said that the vision of the church is for its members to be a “community of missionary disciples … who bear fruit and rejoice.”

He invited attendees to read the exhortation themselves, and to “take initiative, … to see and respond” to the needs of those around them.

That message resonated with Father Higgins, who appreciated the extended visit by the archbishop at the multilingual parish.

“It’s great for the community, because we’re so diverse,” said Father Higgins. “To have him be able to celebrate Mass in English and in Spanish was wonderful.”

Given the God of surprises, “maybe in a year or two we’ll get him back to celebrate a Vietnamese Mass as well,” he said.