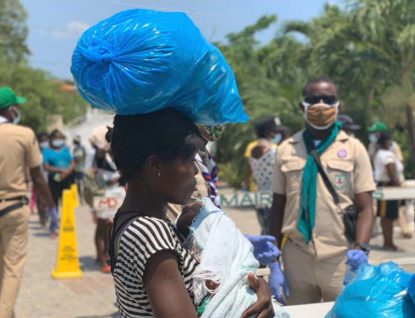 A Haitian woman holds her baby and a bag of food aid at distribution center in Haiti’s West Department. (Photo courtesy of Food for the Poor)

At times, a charity has to digress from its primary mission to respond to an immediate pressing need.

Take Father Chuck’s Challenge, founded 13 years ago by Msgr. Frank Schmidt, really as a memorial to the late Father Charles (Chuck) Pfeffer, his successor once removed as head of the Office for Youth and Young Adults of the Archdiocese of Philadelphia at that the time.

Rather than reinvent the wheel, Msgr. Schmidt chose to work through an existing charity, raising money while they took care of the logistics. To this end he partnered with Florida-based Food for the Poor and the American Nicaraguan Foundation. The focus has been housing in poverty areas of Central America and the Caribbean.

Father Chuck’s Challenge has so far concentrated on Nicaragua, which is one of the poorest counties in the Western Hemisphere and Haiti, which is certainly the poorest.

Food for the Poor’s main work is in the area of providing food security where it is lacking. But it is active in other needs for the poor, including much-needed housing. That’s where Father Chuck’s Challenge comes in.

The COVID-19 pandemic has complicated the mission of Food for the Poor and affected donations to almost every cause.

Countries like Haiti and Nicaragua may not have the percentage of COVID cases as the United States, but they have been impacted by a slowdown in crucial foreign aid.

For that reason Food for the Poor has contacted all of the organizations that work with it, including Father Chuck’s Challenge, asking for a special appeal to assist in feeding the poor in Central America and the Caribbean.

“We’ve donated $40,000 to that project and we are sending a mailer to give all of our donors an option to allocate a part of their donation to this,” said Theresa Gilmore,  the chief operations officer for Father Chuck’s Challenge.

During the pandemic crisis Food for the Poor is intending to provide 345 families with a two-month supply of food with items including 41 pounds of rice, 13 pounds of beans, a gallon of vegetable oil, 24 cans of sardines and 24 packages of spaghetti.

Pandemics come and go, but as Jesus admonished shortly before his death (Matthew 26:11), “The poor you will always have with you.”

The need for the work of Food for the Poor and its support charities including Father Chuck’s Challenge will go on long after the coronavirus is history. 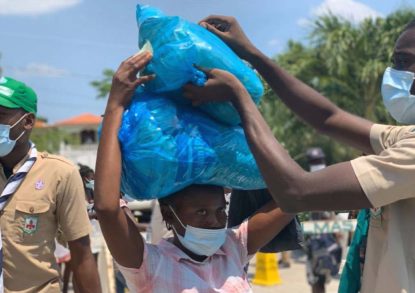 A woman receives bags of food aid in Haiti, the poorest country in the Western Hemisphere. (Photo courtesy of Food for the Poor)

So far, according to its records, Father Chuck’s Challenge has funded the building of 1,314 modest 400-square-foot little homes clustered in 24 small rural villages complete with furnishings, clean water supplies and individual outhouses. Many have electricity thanks to solar panels.

If this doesn’t sound like much, you would have to see the shacks the people were living in before Father Chuck’s Challenge to appreciate the difference.

In addition to the houses there are community centers, schoolhouses, a couple medical clinics, chapels, even a rectory.

It doesn’t end with housing. Seeds and tools were provided to encourage self-sufficiency. Thousands of young fruit trees were planted around the new villages and in some cases cows, goats and pigs were provided, along with 5,400 chickens with sufficient roosters to create flocks. Unfortunately, most of the chickens were promptly eaten, but it was a nice try.

In Haiti the emphasis has been on creating fishing villages, with not only houses but fishing boats and all of the necessary support equipment to establish deep-sea fishing in the area, thus giving the residents meaningful employment.

Msgr. Schmidt, although technically retired, remains active with Father Chuck’s Challenge as a persuasive fundraiser and inspiration for all. Now the leadership has passed to equally dedicated Father Charles Kennedy, who has an added advantage in that he is fluent in Spanish.

Father Chuck’s Challenge is a true charity. It doesn’t receive a dime from the government — federal, state or city. If you have a few dollars to spare, it is a great cause to support. If you give more than a few dollars they might name a house for you.

If you give a whole lot of dollars, heck, they’ll name a new village for your patron saint.

For more details on this truly Christian work of mercy visit the website fatherchuckschallenge.com.