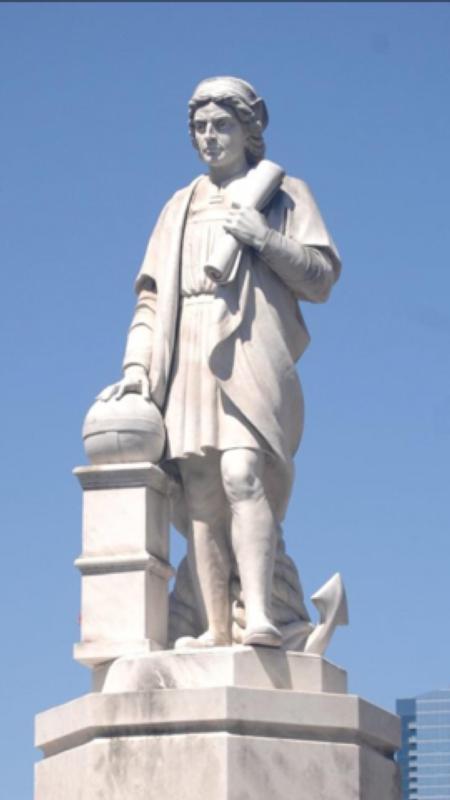 A statue of Christopher Columbus near Little Italy in Baltimore is seen in this undated photo. The statue was a source of pride for the Italian American community and of controversy for critics of the explorer. (CNS photo/courtesy Santo Grasso via Catholic Review)

BALTIMORE (CNS) — Weeks after protesters toppled a statue of Christopher Columbus and threw it into Baltimore’s Inner Harbor, members of the city’s Italian American community are developing a plan to reproduce the marble monument so it can be displayed in a more secure location.

Grand Knight Santo Grasso, of the Knights of Columbus St. Vincent Pallotti Council No. 14535, said community members retrieved the statue from the Inner Harbor a few days after it was vandalized July 4. Broken into three pieces, however, it cannot be restored.

“Everybody was upset,” said Grasso, a parishioner of St. Leo the Great Church in Little Italy.

“It was devastating because we had talked with the city. We were trying to negotiate with the city two weeks before this happened about protecting the statue until we could figure out what to do with it. And the city failed us,” he told the Catholic Review, the news outlet of the Archdiocese of Baltimore.

Baltimore Mayor Jack Young has denounced the toppling and vowed the perpetrators would be brought to justice, but videos of the incident show police officers choosing not to intervene as the statue came down.

Then-President Ronald Reagan and Baltimore Mayor William Donald Schaefer dedicated the artwork in a 1984 ceremony that also included Baltimore Archbishop William D. Borders. The statue had been funded by the Italian American community.

The statue is one of dozens of historical monuments that have been toppled or vandalized across the country amid protests demanding racial justice, sparked by the death of George Floyd while in police custody in Minneapolis.

Columbus, the Italian explorer, was once universally credited with “discovering” America in 1492, but in recent years some historians and activists have sought to bring greater attention to his use of violence against indigenous peoples and his involvement in the slave trade.

Kaye Whitehead, a professor of African and African American studies at Loyola University Maryland, said there has been an “active, ongoing, growing push” to “recognize the fact that indigenous people were killed at the hands of people like Christopher Columbus.”

However, Columbus has long been a hero to Italian Americans who have seen the famous explorer as a forerunner to America’s Founding Fathers. In the late 19th century, Italian American immigrants, facing persecution and discrimination in the U.S., successfully promoted Columbus’ legacy as a way to reinforce Italian contributions to U.S. society.

“He’s become a symbol. So his own actual life might not have been exemplary,” said Pallottine Father Bernard Carman, pastor of St. Leo the Great in Baltimore’s Little Italy. “His identity has taken a life of its own and goes beyond the concrete details of his life.”

Italian Catholics also noted it was Columbus’ arrival that introduced Christianity to the Americas. That’s the principal reason the Catholic fraternal organization, the Knights of the Columbus, bears his name.

It’s because of this history that Grasso disagrees with the actions of the protesters and why his community took the trouble to retrieve the statue.

“It had a lot of significance to a lot of people, including myself,” Grasso said. “It wasn’t about the statue. It was what it represented to Italian American heritage. So we weren’t going to leave it in the harbor.”

Carl Anderson, Supreme Knight of the Knights of Columbus, decried the destruction of Baltimore’s Columbus statue in a recent statement.

“While our faith calls us to be respectful of different perspectives, acts of vandalism are crimes against all who cherish democracy and mutual respect. The Knights of Columbus remains firm in its condemnation of all forms of racism and violence, including political violence,” he wrote.

In the statement, Anderson talked about the Knights’ commitment to combating racism and noted that the Ku Klux Klan had tried to stop Columbus Day celebrations and opposed Columbus statues simply because Columbus was a Catholic.

Father Carman says he supported the general aims of the Black Lives Matter protesters but disagrees with the destruction of the statue.

“I know that there are good intentions. Certainly, I agree with the movement to say there’s still this systemic racism,” Father Carman said. “But at the same time, there are elements that go far too far. They have no plan and no idea. They just destroy.”

Father Carman said he has offered to give the new Columbus statue a home on the campus of his parish as part of a small Italian American history museum. He emphasized the plans are in the very early stages, but putting Columbus on display in a private setting with additional historical context may avoid future disputes, he said.

Whitehead said she thinks Father Carman’s proposal has merit because the statue would be displayed in a private space and with additional details. Whitehead said that without context and in public space, these presentations can distort our history.

Grasso said there also are plans to erect a new statue of a prominent Italian or Italian American on the plinth where Columbus once stood.

Father Carman said among his suggestion is St. Frances Xavier Cabrini. An Italian immigrant, “she built schools, she educated children, she built schools for native children,” he said. “She did tremendous stuff and she’s a real Italian.”

Swift is social media editor at the Catholic Review, the news outlet of the Archdiocese of Baltimore.

NEXT: Radio host Purvis pledges to address racism as she sees appropriate