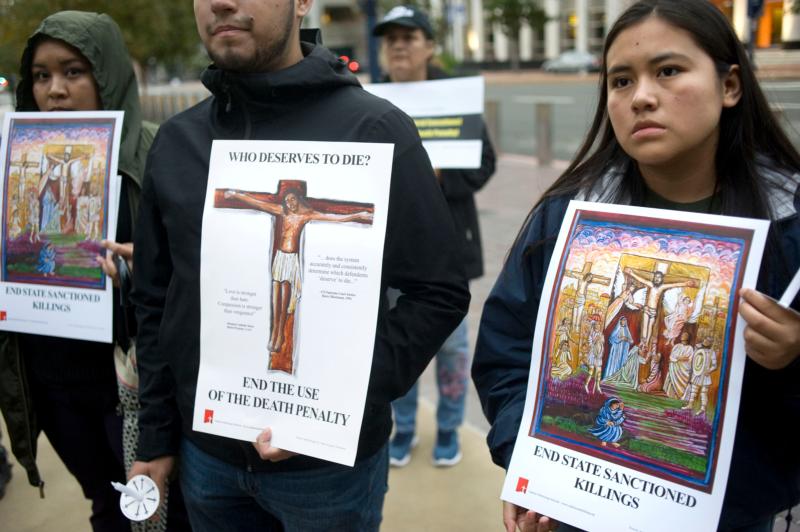 WASHINGTON (CNS) — When the Supreme Court announced June 29 that it would not hear an appeal by federal death-row inmates challenging the method to be used in their upcoming executions, a longtime advocate against capital punishment said the court “abdicated its legal and moral responsibilities.”

“This means that the federal government will likely execute four people” starting in July “using an untested lethal injection protocol during a global pandemic without any real oversight from the Supreme Court,” tweeted Sister Helen Prejean, a Sister of St. Joseph of Medaille.

The unsigned three-sentence order from the court said Justices Ruth Bader Ginsburg and Sonia Sotomayor would have heard the inmates’ appeal.

The inmates had appealed a lower court order allowing the federal government to proceed with executions using a single-drug protocol. The federal executions, which have not taken place since 2003, are set to resume in mid-July.

When Attorney General William Barr announced last year that the federal government was reinstating the federal death penalty, he said the executions would use a single drug instead of a three-drug protocol carried out in most recent federal executions and by several states. This execution method was challenged by some of the federal death-row inmates. Last November, a federal judge said this protocol injection went against the Federal Death Penalty Act.

In April, a federal appeals court lifted a lower court ruling that had prevented the execution of federal death-row inmates.

Three of the executions are scheduled to take place in July and one is scheduled for August. The inmates — Danny Lee, Wesley Ira Purkey, Dustin Lee Honken and Keith Dwayne Nelson — have been convicted of murder.

The day after the court announced it was not taking up the inmates’ appeal, Archbishop Paul S. Coakley of Oklahoma City, chairman of the U.S. Conference of Catholic Bishops’ Committee on Domestic Justice and Human Development, urged the Trump administration to “reverse course” on resuming these executions.

“I implore Attorney General Barr and President Trump to abandon this path to preside over the first federal executions in 17 years,” he wrote, adding that the bishops, echoing Pope Francis, Pope Benedict XVI and St. John Paul II, have been calling for an end to the death penalty for decades.

Quoting a statement he issued with two other bishops last year, Archbishop Coakley said: “To oppose the death penalty is not to be ‘soft on crime.’ Rather, it is to be strong on the dignity of life.”

The group also urged those in opposition to the resumption of federal executions to sign a joint statement to Barr and President Trump that had more than 2,700 signatures as of June 29.

On June 24, the mother and grandmother of two of the three victims Lee was convicted of murdering, in 1999, wrote to Trump asking him not to execute Lee, saying it would only bring her family more pain.

“We feel Mr. Lee’s execution would dishonor the memory of my daughter Nancy Ann and my granddaughter Sarah Elizabeth,” she wrote.

Ruth Friedman, an attorney for Lee, who is the first of the federal prisoners scheduled to be executed, said in a June 29 statement that despite problems with the death penalty and “even as people across the country are demanding that leaders rethink crime, punishment and justice, the government is barreling ahead with its plans to carry out the first federal executions in 17 years.”

“Given the unfairness built into the federal death-penalty system and the many unanswered questions about both the cases of the men scheduled to die and the government’s new execution protocol, there must be appropriate court review before the government can proceed with any execution,” she added.

When Barr announced the end to the moratorium on executing federal inmates, the U.S. Conference of Catholic Bishops spoke out against it as did Indiana’s Catholic bishops since most of the federal death-row inmates are imprisoned at the U.S. Penitentiary in Terre Haute, Indiana, which is where most of the federal executions are scheduled to take place.

In the Archdiocese of Indianapolis, Deacon Steve Gretencord, who ministers to inmates on death row at the Federal Correctional Complex in Terre Haute, told The Criterion, the archdiocesan newspaper, he was “surprised a little bit” by the Supreme Court’s denial of the cert petition. “I thought the courts would be rethinking the value — or lack of value — of executions in the criminal justice system. So I’m surprised in a very sad way.”

In a June 18 statement on the upcoming executions, Indianapolis Archbishop Charles C. Thompson said: “The taking of life, no matter how ‘sanitary’ or ‘humane,’ is always an act of violence.”

“While the church is certainly concerned with the soul of every person, including those on death row, I make this plea against the death penalty out of ultimate concern for the eternal soul of humanity,” he said.

Natalie Hoefer in Indianapolis contributed to this story.

NEXT: Federal executions in Indiana said to ‘add violence on top of violence’