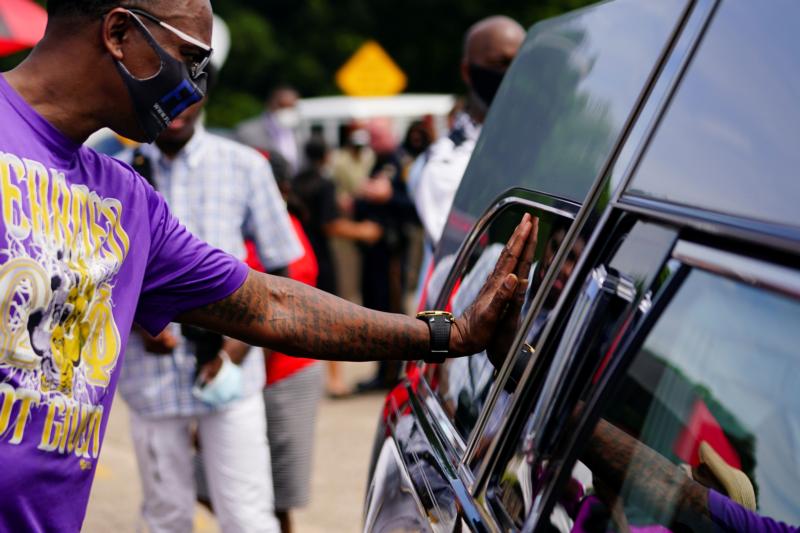 A man in Selma, Ala., places his hand on the hearse carrying the body of the late Rep. John Lewis, D-Ga., after it was carried across the Edmund Pettus Bridge July 26, 2020. The civil rights movement legend who was a colleague of the Rev. Martin Luther King Jr. died July 17, 2020. He was 80. (CNS photo/Elijah Nouvelage, Reuters)

WASHINGTON (CNS) — As Sister Simone Campbell, executive director of the Catholic social justice lobby Network, began reflecting on her fondest memories of the late Congressman John Lewis, she could recall one instance in which his body language showed something different than the soft-spoken, yet passionate man she knew.

“The last time we really worked with him on something was back in ’17,” Sister Campbell said in a July 22 interview with Catholic News Service.

She remembered the Democrat’s anger over efforts by Republicans and the Trump administration to repeal and replace the Affordable Care Act.

“The new administration had done nothing about … getting people to enroll in the ACA, because they thought they were going to repeal it and they didn’t want to support it,” said Sister Campbell, a Sister of Social Service. “So, what became clear was (that) everybody that cared about the ACA had to work together to get people enrolled and to make sure they knew about what the limits were.”

So, in response to the Health Care Repeal Act introduced by House Republicans in March 2017 to repeal and replace the ACA, Sister Campbell and Lewis organized a faith-based event at the United Methodist Building in Washington. Using his quiet thoughtfulness, she said, Lewis managed to get members of Congress to leave the Capitol and join the event.

“He was just livid because of what the Republicans were trying to demand because the poor health insurance industry was going to suffer so much,” said Sister Campbell, who during the Zoom interview with CNS clenched her fists to demonstrate the frustration in Lewis’ body language as his face got tight and “he explained, ‘They don’t understand the needs of the people.'”

Though his demeanor was out of the ordinary, she said, his intent was consistent with his life’s work.

The bill ultimately failed to advance.

Lewis, who was an icon of the civil rights movement and a colleague of the Rev. Martin Luther King Jr., died July 17 after a six-month battle with advanced pancreatic cancer. He was 80. Lewis represented Georgia’s 5th Congressional District from 1987 until his death.

On July 26, his casket was taken by horse-drawn caisson through several blocks of downtown Selma, Alabama, and then over the Edmund Pettus Bridge, where he helped lead the 1965 march for voting rights. Afterward, his body lay in state in the Alabama Capitol in Montgomery.

In Washington an invitation-only afternoon ceremony was planned July 27 to welcome Lewis’ body to the Capitol Rotunda. His body was then to lie in state on the East Front Steps of the Capitol for a public viewing through July 28. His family said his body will then lie in state in Atlanta July 29.

“Not only was he connected with the people, but he knew his job could make their lives better. And I think just because he worked on civil rights, he knew what a difference he could make. He embodied that piece about caring for everyone, including those who opposed him,” Sister Campbell told CNS.

“He started these trips down to Selma to go through the history (of civil rights), and he would bring Republicans and Democrats,” she explained. “He tried to bring people along to see another point of view. And those trips, (as) I’ve heard from Republicans, were life transforming for them because they never knew (the issues) from his point of view.”

His connection to and deep care for the people is how Lewis’ character will be remembered but championing the Voting Rights Act of 1965, which prohibits racial discrimination in voting, will be his legislative legacy, according to Sister Campbell.

“He was a child of the ’60s. He knew the oppression that people were going through; He himself experienced it, being beaten for peaceful demonstration on the Pettus Bridge,” she said.

“Determined, forceful, thoughtful,” she said, are the attributes that led to Lewis being a distinguished man in history. “He persevered his entire life for justice. From the time he was a college kid. And that perseverance paid off for the benefit of people,” said Sister Campbell.

Pope Francis said perseverance and meekness are signs of holiness in the 21st century. What the pope means by “meekness,” she said, “is a willingness to learn, which for me is about listening.”

Despite the importance of his work, Lewis also had a great sense of humor, Sister Campbell added. And that humor, she said, “made a whole bunch of things more bearable.”