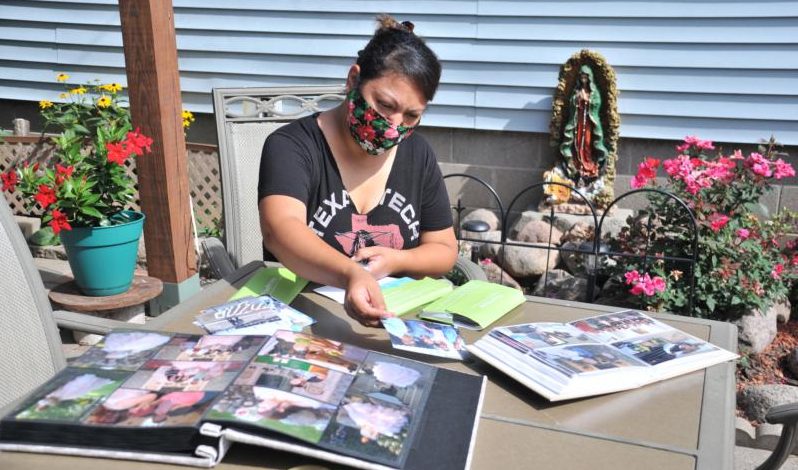 Alicia Nava looks at family photographs at her home in Davenport, Iowa, July 25, 2020. Nava and 14 of her family members have tested positive for COVID-19 and three continued to be hospitalized in late July. (CNS photo/Lindsay Steele, The Catholic Messenger)

DAVENPORT, Iowa (CNS) — As Alicia Nava flipped through family photographs the morning of July 25, she said solemnly from behind a floral print mask, “We were taking precautions.”

Three weeks before, she was in the hospital battling COVID-19, as were five of her relatives. Three remain hospitalized for the virus, including her father, Adolfo, who has been on life support for nearly a month. In total, 15 members of the Nava family across five households have tested positive for COVID-19.

“It just happened. It spreads so fast,” she told The Catholic Messenger, newspaper of the Diocese of Davenport.

The adults in the family decided early on in the pandemic to take precautions outside the home such as mask-wearing, hand-washing and sanitizing. They also refrained from gathering as an extended family, something they did often before the pandemic. They encouraged their teen-age and young adult children to do the same. “Young people don’t always listen,” Nava said.

She believes the virus started with a teenage niece who had been visiting family members while unknowingly infected. She was the first to develop symptoms, although they were mild. Shortly after, Nava’s daughter, Melina, developed a slight cough. Then, Alicia Nava began to experience a sore throat and a headache.

“Four days later, I started to develop a fever, nausea and stomach distress. I started having pain in my diaphragm. I was concerned and told my husband we probably have COVID. That’s when we found out my niece had tested positive,” Nava said.

Everyone in Alicia Nava’s household eventually tested positive, with the exception of her eldest son and his family, who temporarily moved out of the home to break the chain of transmission.

A study published June 17 in The Lancet Infectious Diseases journal reports that even those who practice precautions such as mask-wearing and social distancing outside the home are vulnerable to contracting the illness within their own homes. The disease spreads easily among people who live together and other family members, even before an infected person shows symptoms.

The disease has infected Nava’s family members ranging in age from 13 to 77. The symptoms and severity of the virus have varied among family members. Nava’s sister Estela is undergoing physical therapy to cope with weakness in her diaphragm. Nava assumed her mother, Victoriana, would have the most severe case due to preexisting conditions, but she is recovering at home without major complications. Although Nava, 38, is considered recovered, her heart rate elevates to abnormal levels at times.

The family’s Catholic faith has been a source of comfort and strength during this time of uncertainty, fear and helplessness. Adolfo Nava spent his days at the hospital reading the Bible before he was sedated and hooked up to a ventilator.

Alicia Nava listened to praise and worship music to ease her mind as she endured three days of isolation in the hospital. She bears bruises on her arms and stomach from blood thinning injections and intravenous treatments.

Diocesan priests involved in Hispanic ministry have offered prayers and Mass intentions for the family. The intercessory team from Eagles’ Wings House of Prayer in Davenport has been praying for the family, as well. Church friends have called and texted and offered meals.

The illness has affected the family’s finances in addition to their health. The breadwinners from all five households have been unable to work as they recuperate and unemployment benefits have not come through yet, Nava said. Reluctantly, she started a crowdfunding campaign to help family members cope with medical bills and household expenses.

“It makes me uncomfortable asking for money” when so many other families are struggling, she said.

As news outlets around the country catch wind of the Nava family’s story, strangers have opened their pocketbooks — and their mouths.

Most people are encouraging; some are quick to blame the family. Nava has asked her children not to dwell on the comments of naysayers. “You’re going to have good comments and bad comments. You just have to let it go,” she said.

She feels compassion for her niece, who unknowingly spread the virus. “It’s hard for her as well; she’s suffering like the rest of us. Everyone makes mistakes.”

Nava hopes that her family’s story will encourage others to take the pandemic seriously. She encourages families to wear masks at home around visitors and family members from other households.

“The virus is still out there,” she said. “You can be a carrier and not even know.”

Steele is a staff writer at The Catholic Messenger, newspaper of the Diocese of Davenport.