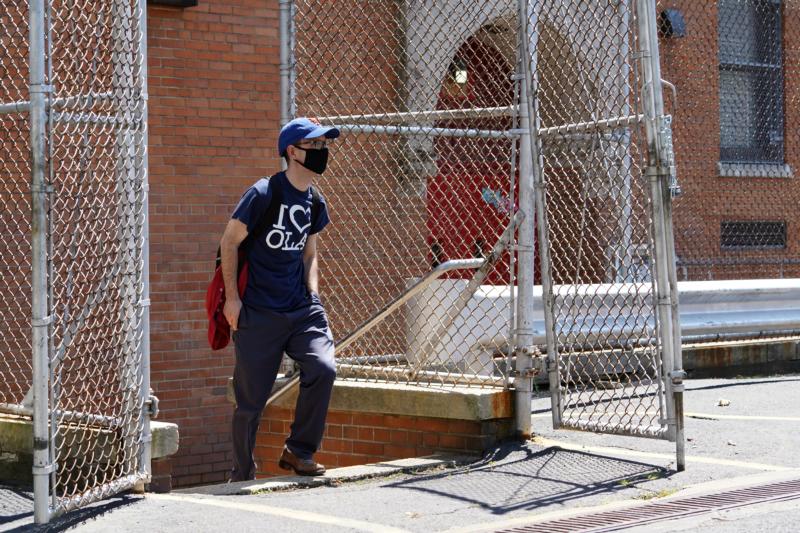 Principal John-Paul Barnaba is seen exiting Our Lady of the Assumption School in the Pelham Bay section of the Bronx borough of New York July 9, 2020, the day the Archdiocese of New York announced that financial fallout from the COVID-19 pandemic is forcing it to close 20 schools, including Our Lady of the Assumption. Citing similar reasons, the Diocese of Brooklyn, N.Y., the same day announced it will shutter six of its schools. (CNS photo/Gregory A. Shemitz)

NEW YORK (CNS) – Twenty schools in the Archdiocese of New York will not reopen in the fall because of the financial fallout caused by the novel coronavirus pandemic.

A news release from the archdiocese cited the pandemic for sickening thousands of people with COVID-19, the illness caused by the coronavirus, and leading to massive layoffs that have left people without jobs for weeks, leaving them unable to pay school tuition.

The archdiocese also pointed to “a significantly low rate of re-registration for the fall, and added that months of canceled public Masses have resulted in a loss of parish contributions that traditionally help support the schools and also hurt fundraising for scholarships.

Meanwhile, in the neighboring Diocese of Brooklyn, New York, school leaders said six schools will close there as of Aug. 31. They also attributed the closings to the pandemic.

“Children are always the most innocent victims of any crisis, and this COVID-19 pandemic is no exception,” New York Cardinal Timothy M. Dolan said. “Too many have lost parents and grandparents to this insidious virus and now thousands will not see their beloved school again.”

Cardinal Dolan added that his prayers were with the children and their families most affected.

“Given the devastation of this pandemic, I’m grateful more schools didn’t meet this fate and that Catholic schools nearby are ready to welcome all the kids,” he added.

The archdiocese said that about 2,500 students and 350 staff members will be affected by the closings. Eleven of the schools are located in three of New York’s five boroughs — Manhattan, the Bronx and Staten Island — with the remaining nine in outlying communities including New Rochelle, New Windsor, Poughkeepsie and Yonkers.

Michael J. Deegan, archdiocesan superintendent of schools, acknowledged that closing the schools was a painful decision. He said studies of the financial status of each left administrators with no option but to close them.

“I have been a Catholic school educator for more than 40 years and could never have imagined the grave impact this pandemic has had on our schools,” he said in a statement.

Deegan suggested that unless additional federal assistance in any future emergency response bill would be coming, more schools would face closure.

“This is a very bad day for everyone in the extended Catholic school community. I send my love and prayers to the families, teachers, principals and staff of the affected schools,” Deegan said.

In Brooklyn, the six schools are located in the New York City boroughs of Queens and Brooklyn.

The diocese said in its news release the schools have experienced declining enrollment for the last five years, but that registrations dropped off significantly as the pandemic took hold of the metropolitan area.

The schools have more than $630,000 in outstanding tuition payments, the diocese said.

“This is an incredibly sad day for our Catholic community to have to close these schools, but the devastation caused by the coronavirus pandemic is insurmountable,” said Thomas Chadzutko, diocesan superintendent of schools.

School leaders in New York and Brooklyn said efforts are underway to enroll children in Catholic schools that remain open.

In the Brooklyn Diocese, the St. Elizabeth Ann Seton Trust is providing a one-time $500 grant for each child from a closed school who enrolls and attends a new Catholic school in Brooklyn or Queens in the fall as long as all other financial obligations have been met. 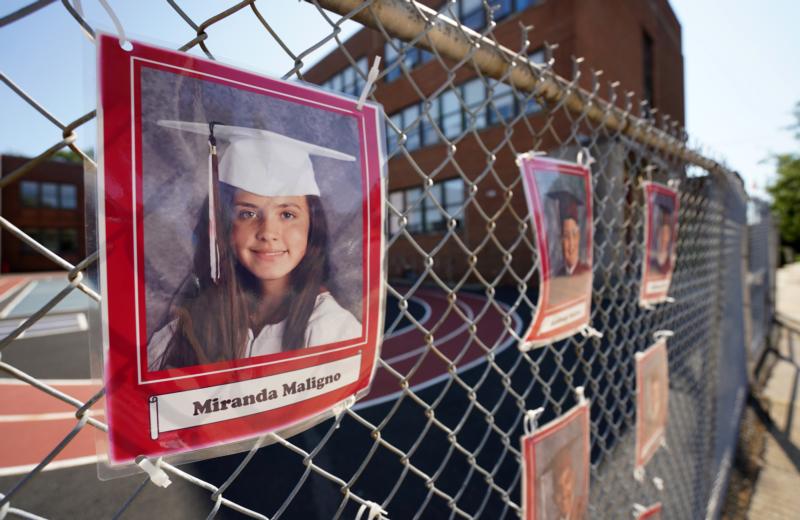 Portraits of this year’s graduates are displayed on a fence at St. Mel’s Catholic Academy in the Flushing section of the Queens borough of New York July 9, 2020, the day the Diocese of Brooklyn, N.Y., announced that financial fallout from the COVID-19 pandemic is forcing it to close six schools, including St. Mel’s. Citing similar reasons, the Diocese of Brooklyn, N.Y., the same day announced it will shutter six of its schools. (CNS photo/Gregory A. Shemitz)