‘Our most tragic time’: Felician sisters bear loss of 13 sisters to COVID-19 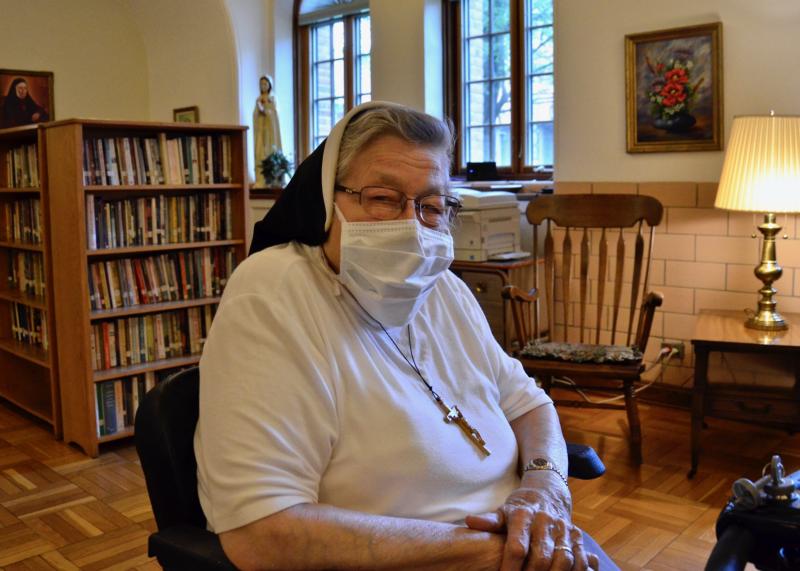 LIVONIA, Mich. (CNS) — They were teachers. A librarian. A director of religious education. A secretary in the Vatican Secretariat of State. The author of a 586-page history of the congregation.

One was an organist. One helped her second-grade class write and perform a commercial for Campbell’s Soup. One was a nurse and led nursing students on mission trips to Haiti.

All of them were members of the Congregation of the Sisters of St. Felix of Cantalice, or Felician sisters. They lived together, prayed together and worked together.

And in one awful month — from Good Friday, April 10, to May 10 — 12 sisters died of COVID-19, the illness caused by the novel coronavirus. Eighteen other Felician sisters at the convent in Livonia had the illness as well.

“We couldn’t contain the grief and the sorrow and the emotional impact,” said Sister Noel Marie Gabriel, director of clinical health services for the Felician Sisters of North America. “We went through the motions of doing what we had to do, but that month was like a whole different way of life. … It was a month of tragedy and sorrow and mourning and grieving.”

But as the world grapples with the economic and social fallout of the continuing pandemic, survivors are discovering the virus can cause lasting damage, and recovery may not mean a return to full health. One of the 18 sisters who initially survived the illness died from its effects June 27, making her the 13th victim.

Though sisters worldwide have died from the illness, no one is tracking how many. News reports show that as of July 16 at least 19 other sisters have died in the United States, including a Felician sister at the order’s convent in Lodi, New Jersey; six sisters from two communities at a shared convent outside Milwaukee; and three Maryknoll sisters in Ossining, New York. 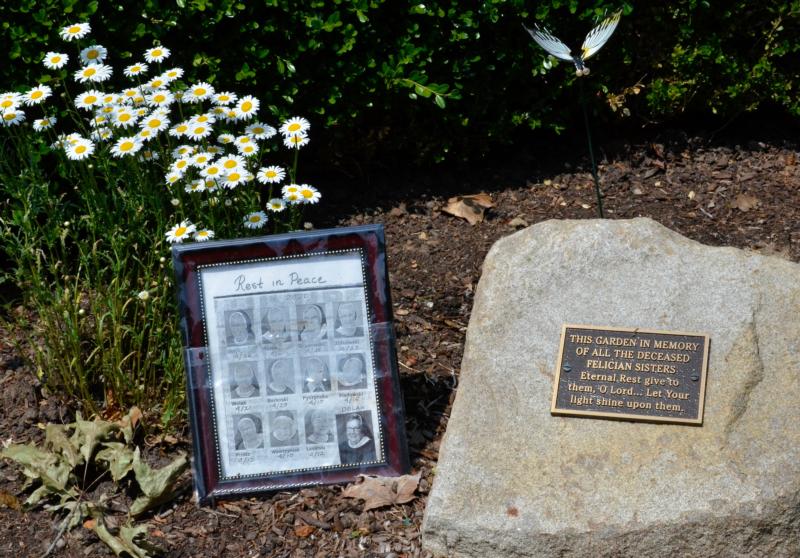 A small memorial for the 12 sisters who died in one month from COVID-19 sits in the garden outside the Felician sisters’ convent in Livonia, Mich., June 10, 2020. (CNS photo/Dan Stockman, Global Sisters Report)

The Felicians in Livonia may have experienced the worst loss of life for a community of women religious since the 1918 influenza pandemic. In many ways, because of the restrictions in place to prevent a return of the virus, sisters’ grieving has yet to begin.

All aspects of community remain prohibited or severely limited. Sisters could not attend the funerals. There are limits on the number of people allowed in the chapel. They cannot enter each other’s rooms. They were dining in three different shifts, with one sister seated at each table. As of July 6, they are back to two to a table.

The community had 65 sisters before the pandemic. The remaining sisters fear the day they can be together as a group and see how many are no longer there.

“I get chills thinking about that,” Sister Mary Andrew Budinski, superior of the Livonia convent, told Global Sisters Report. “The raw grief is yet to come, I think.”

As the pandemic progressed in March, so did the restrictions at the convent: no visitors, no shopping trips, no group activities.

At first, there was no Mass, only Communion services, because the priest was not allowed to enter the convent. Then, Communion services were canceled, and Communion was distributed to the sisters in their rooms. On Holy Thursday, even that ended.

The 360-acre campus was home to 800 sisters in the 1960s, but convent life today has become concentrated around the chapel and the two halls where sisters live. Much of the sprawling building, dating to 1937, is unused.

The first floor of St. Joseph Hall, a three-story wing of the convent, is dedicated to sisters who need 24-hour nursing care. The second floor is for assisted living, and the third floor, independent living.

“I first heard two aides had contracted the virus,” Sister Andrew said. “We don’t know who they are, and we don’t want to know. Then it hit sisters on the second floor, and it went through like wildfire.”

“We all knew if it hit the place, it would be bad,” Sister Mary Ann Smith said. “But we never anticipated how quickly it would go.”

A new reality began. Almost all of the many traditions the sisters keep when one of their own dies had to be suspended. There could be a funeral, but only 10 people could attend. If they also went to the graveside, they had to travel one to a car. There would be no hugs.

“That whole part of the closure process has yet to be realized,” Sister Joyce said.

Sister Luiza’s table companion at meals, Sister Nancy Jamroz, said no one knew Sister Luiza had the virus. She went to the hospital for heart palpitations.

“Everyone said, ‘She’ll be back in a few days,'” Sister Nancy told Global Sisters Report. “She never came back.”

That became a pattern. One sister would go to the hospital overnight because she could not breathe, but would call in the morning to say she was feeling better and would be home in a few days. Then would come the news that she had died.

“It was the classic case of what we had heard about the virus,” Sister Nancy said. “It’s vicious, and it’s quick.”

Sister Nancy said accepting the reality of what was happening to the community was hard. Required isolation meant the sisters heard of their friends’ deaths over the intercom during the daily 1 p.m. announcements.

Closing the convent was anathema to the sisters. They had dedicated their lives to serving others. So March 13, the day before the doors were shut to the outside world, 10 of the sisters went to the chapel steps and held up a banner to the Livonia community that said, “We’re lifting you up in prayer.”

“We are not hidden behind these walls,” Sister Joyce said. “We will always continue to pray for the world and especially the people of Livonia.”

But now, it’s turned around, she said. “Now it’s: ‘Sister, we’re praying for you.’ The number of cards and letters we’ve received is unbelievable.”

They also believe there are others praying for them who cannot be seen: the sisters who died.

“There are some days when I say, ‘God, we have 12 sisters up there, just like the 12 apostles,” Sister Nancy said June 10, before the community’s death toll rose to 13. “Anyone who knew those sisters knows they have companions (in heaven) now. They’re looking down, letting us know it’s going to be OK.”

It’s not yet clear in what ways, but each member of the community has changed, she said.

“We haven’t been together enough to know how, but we’re different people than we were in March,” she said. “None of us are the same.”

The Felicians have 469 sisters in six large convents in North America. Of those, only the convents in Livonia and Lodi had cases of COVID-19. Lodi reported 12 cases and one death.

The virus also hit the staff caring for the sisters. One sister was believed to have the virus, but the nurse caring for her stayed with her anyway, despite the risk to herself. Another staff member caught the virus but had an elderly relative at home, so she lived in a guest room at the convent for weeks until she recovered.

And there were volunteers, those who willingly came from across the country to work in a place where death stalked the hallways.

Not thinking about the grief and just doing what needs to be done is a common coping mechanism in times of great trauma. But eventually, the trauma must be dealt with.

Sister Mary Madeleine Dolan, 82, died May 10. Sister Mary Danatha Suchyta, 98, one of the sisters thought to have survived the illness, died from its effects June 27.

In the middle of that awful month, the Felician Sisters across the continent gathered on a Zoom call to their sisters in Livonia. They brought a message of comfort, of community, a message of love. They remembered the sisters lost in a slideshow. The Livonia sisters said they wept through the entire thing.

When it’s all over, they plan to hold a celebration of life for the 13 sisters they lost. In the meantime, there is still the semi-quarantine to deal with. The last person came out of a 28-day isolation June 8, but there are still many restrictions.

“I look at it like an accordion that can open and close, and right now, that accordion is still really tightly closed,” Sister Noel Marie said. “We’re not touching each other, not hugging, not doing the things we usually do. … We miss that part of how we live.”

This story was originally published in full in Global Sisters Report, a project of National Catholic Reporter. It is part of ongoing coverage of the coronavirus pandemic by GSR. The website is http://globalsistersreport.org.

NEXT: Archbishop Perez calls for ‘honest conversations’ with youth on race, culture