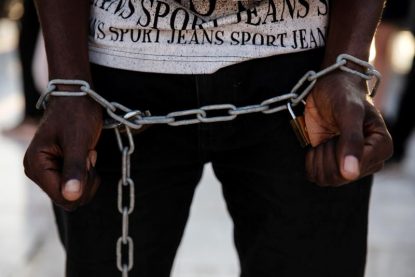 A man in Athens, Greece, has a chain wrapped around his wrists in this photo illustration. (CNS photo/Alkis Konstantinidis, Reuters)

WASHINGTON (CNS) — Government-sponsored trafficking is “a perversion of any government’s reason for existence,” which is “to protect rights, not crush them,” Secretary of State Mike Pompeo said during the release of the 20th annual Trafficking in Persons Report.

“The United States will not stand by as any government with a policy or pattern of human trafficking subjects its own citizens to this kind of oppression,” Pompeo said. “We will work tirelessly in the United States to free those who are still enslaved.”

Pompeo was joined for the June 25 release of the TIP Report, as it is called, by U.S. Rep. Chris Smith, R-New Jersey, who 20 years ago was the author of the historic Victims of Trafficking and Violence Protection Act of 2000, the law which mandated the report and which has been reauthorized many times.

Also in attendance were Ambassador John Richmond, who serves in the Trafficking in Persons Office at the State Department, and White House adviser Ivanka Trump, the daughter of President Donald Trump, who has made human trafficking one of her signature issues.

The TIP Report “is the gold standard, exposing problems and motivating countries to reform,” said Smith.

“The TIP Report is a key component of our nation’s robust efforts to combat human trafficking which ruins childhoods, leaves victims scarred for a lifetime and enriches human traffickers,” added Smith, author of five human trafficking laws. “The annual report catalogs and reviews what countries are doing to track down and prosecute the perpetrators and how they are working to rescue and help the victims.”

The 570-page report evaluates countries with human trafficking problems according to “tiers.”

The report also has a “Tier 2 watchlist” for countries whose governments do not fully meet the TVPA’s minimum standards but are making significant efforts to bring themselves into compliance.

Finally, the countries doing the best job and are meeting the minimum standards are in “Tier 1.”

Factors that show a country’s sustained efforts include prosecutions, investigations, and measures to inform and educate the public to prevent trafficking in persons.

“China continues to own the worst human trafficking rating of major nations in the world, scoring a Tier 3,” Smith said. “Hong Kong, increasingly under the thumb of the Chinese government, is almost as bad, landing on the Tier 2 watchlist.”

The report states that “traffickers subject PRC national women and girls to sex trafficking throughout the world, including in major cities, construction sites, remote mining and logging camps, and areas with high concentrations of PRC national migrant workers.”

“State-sponsored forced labor is increasingly prevalent in China,” it said.

Ireland appeared on the Tier 2 watchlist for the first time, which Smith, who is Irish American, called “a very disappointing rating but telling.”

“Since 2013, Ireland has failed to secure a single trafficking conviction, and has decreased victim protection efforts,” he explained. “Ireland deserves to be called out. Friends don’t let friends ignore trafficking abuses. With the eyes of the world now upon it, Ireland must do better.”

On brighter note, Smith said Namibia’s efforts to fight human trafficking led to a top rating for the country. “Namibia has earned a Tier 1 ranking, the best rating and one of the highest ratings ever in sub-Saharan Africa region, a proud accomplishment for the Namibian people and their government,” he said.

Convicting and sentencing traffickers along with prosecutions have increased in Namibia. Trafficking victims are trying to help the community as well. They have become more involved in law enforcement cases. The government is launching new campaigns to try and prevent all types of trafficking, according to Smith.

The report allows the United States to see which nations have a human trafficking problem and sanction them if needed. The State Department utilizes the TIP Report to see where work needs to be done around the world.

“The 2020 analysis is a tough but fair report,” Smith said. “Friends are taken to task. It appears to call balls and strikes accurately, unlike during the previous administration, where punches were pulled for political reasons. The TIP report takes modern-day slavery head on, providing a measuring stick for progress — or for regression, and sanction.”

Each year the report honors as heroes people who helped stop this modern-day slavery. This year 146 people from more than 75 countries are listed, including prosecutors, social workers and victim services providers, advocates, nonprofit leaders and a law enforcement officer.

Trump praised Smith’s efforts in the fight against human trafficking.

“It’s great today to have Rep. Chris Smith join us, one of the earliest advocates in Congress to really combat this horrendous evil. Thank you for being here,” she said, calling his trafficking legislation a “landmark law,” and today’s 20th report “a milestone.”