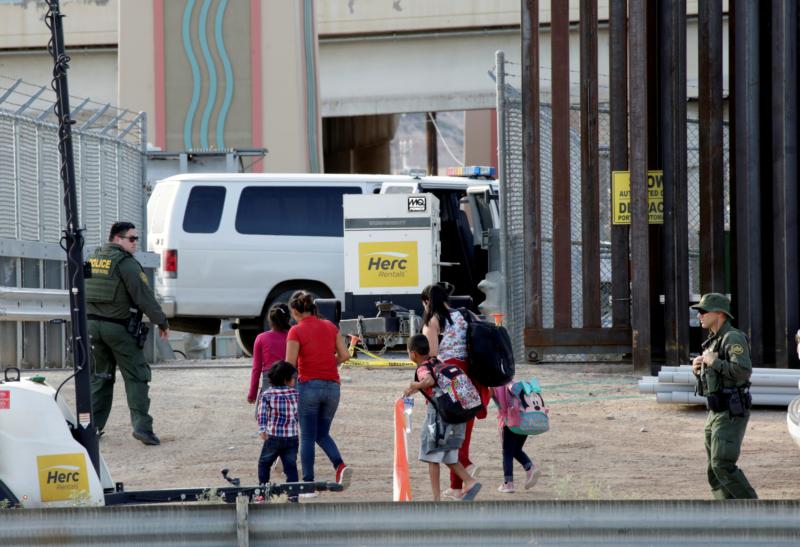 U.S. Customs and Border Protection agents look at migrants who crossed illegally into El Paso, Texas, Sept. 18, 2019, to turn themselves in to ask for asylum. (CNS photo/Jose Luis Gonzalez, Reuters)

WASHINGTON (CNS) — A federal judge ruled late June 30 the Trump administration unlawfully implemented its 2019 policy to turn away asylum-seekers if they don’t first seek protection in countries along their way to the United States.

Judge Timothy J. Kelly of the U.S. District Court for the District of Columbia said the policy might have been legal but the administration bypassed the Administrative Procedure Act, meaning it did not give the public enough advance notice of the new policy, known as the “third-country asylum rule,” nor did it provide the required amount of time for public comment on the change.

The Asylum Eligibility and Procedural Modifications rule was jointly published July 15, 2019, by the Justice Department and the Department of Homeland Security. The agencies said it was written “to take effect immediately when it’s formally published.”

“There are many circumstances in which courts appropriately defer to the national security judgments of the Executive (Branch),” Kelly wrote in his opinion in a suit brought by immigrant-rights advocates. “But determining the scope of an APA exception is not one of them.”

The administration argued it had to be implemented immediately to prevent a surge of migrants that would result if there was a delay in putting it in place. Kelly said that argument was not sufficient, because the administration could have argued there were “important foreign policy reasons” to bypass the procedural rules or give “a broader factual basis for the policy,” but it did not do that.

“The question, though, is whether defendants’ conclusory prediction of a surge in asylum-seekers so great and so rapid as to threaten life or defeat the very purpose of the rule if notice-and-comment procedures were followed is entitled to deference on this record. And circuit precedent commands that it is not,” he wrote.

In August 2019 more than 250 faith leaders and organizations called for an end to this policy, labeling it “a backdoor asylum ban.”

“The rule fails to understand or acknowledge the realities of asylum-seekers’ journeys and the lack of options they have been left with,” said the leaders, who filed a joint public comment Aug. 15, 2019. “No one flees their home or country by choice.”

“For those passing through Northern Triangle countries and Mexico, applying for asylum and waiting for a decision from a country that has little or no ability to process such claims may put the asylum-seeker at further risk of harm,” they said.

The administration’s policy provided that “with limited exceptions, an alien who enters or attempts to enter the United States across the southern border after failing to apply for protection in a third country outside the alien’s country of citizenship, nationality, or last lawful habitual residence through which the alien transited en route to the United States is ineligible for asylum.”

The new rule was immediately challenged in court. On July 24, 2019, a federal judge in San Francisco blocked the Trump administration from enforcing it. In an appeal of that ruling, the U.S. Court of Appeals for the 9th Circuit blocked the government from implementing the new rule in Arizona and California. Last September the U.S. Supreme Court gave the administration the go-ahead to enforce it nationwide at least temporarily, while other appeals were pending.