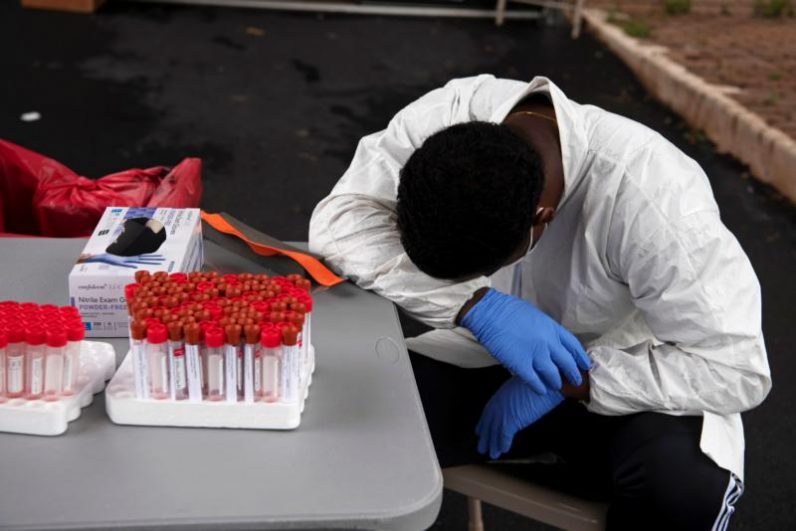 An exhausted health care worker in Houston takes a break July 7, 2020, as people wait in their vehicles to get tested for the coronavirus disease. (CNS photo/Callaghan O’Hare, Reuters)

WASHINGTON (CNS) — The Catholic Health Association July 7 said it was “deeply regrettable” that President Donald Trump has formally withdrawn the U.S. from the World Health Organization during a global pandemic.

Instead, the U.S. should be “leading a coordinated global response to protect the lives of millions of people around the world,” the organization said in a statement released the same day the U.S. submitted its withdrawal notification to the secretary-general of the United Nations.

“As with Ebola, smallpox, polio and HIV/AIDs, the COVID-19 virus does not recognize national borders,” the CHA said. “A global response therefore is needed to save lives around the world and here in the United States. CHA strongly urges the President to reconsider this decision and ensure the U.S. remains a leader in global health.”

CHA’s statement referred to a letter its president and CEO, Mercy Sister Mary Haddad, sent to Trump June 22 asking him then to reconsider pulling out of WHO.

“Withdrawing from the organization at the height of the pandemic is counterproductive and only ensures that the U.S. will have little influence on these efforts” to reform WHO, she said. “Indeed, now is the time to stand in solidarity with those in need around the world to save lives and provide hope.”

Sister Haddad noted that “for over 100 years, through yellow fever, the flu of 1918 and up to today, Catholic health providers have been at the front line of addressing global pandemics.”

“We increasingly hear from our sister Catholic organizations in other regions of the world looking for information and resources on how best to prepare and respond to COVID-19,” she said. She sent copies of her letter to the House Foreign Affairs Committee and the Senate Foreign Relations Committee.

She added, “At a time when the world faces a global pandemic and the rates of infection dramatically increase in the developing world, a global response that includes the United States is essential to build solidarity between people within our own country and around the world.”

Sister Haddad quoted Pope Francis in his “urbi et orbi” (to the city and to the world) address at Easter when he said, “The most vulnerable of our brothers and sisters living in the cities and peripheries of every part of the world, not be abandoned.”

The United States has been WHO’s largest contributor, giving over $400 million annually to the specialized U.N. agency. Based in Geneva, the agency’s primary role is to direct international health within the United Nations’ system and to lead partners in global health responses.

In April Trump suspended the United States’ contributions to WHO over what he called the agency’s “failed response” to the pandemic and its “alarming lack of independence” from China. Experts believe the novel coronavirus first began infecting humans in late 2019 in Wuhan, a city in China’s Hubei Province, according to the Johns Hopkins Coronavirus Resource Center.

In a May 18 letter to WHO’s director-general, Tedros Adhanom Ghebreyesus, the president outlined in bullet-point fashion what he said were “repeated missteps by you and your organization in responding to the pandemic (that) have been extremely costly for the world,” starting with December 2019, when he said the agency “consistently ignored credible reports of the virus spreading in Wuhan.”

Trump gave WHO 30 days to commit “to major substantive improvements” or he would make the temporary freeze U.S. contributions to the agency permanent.