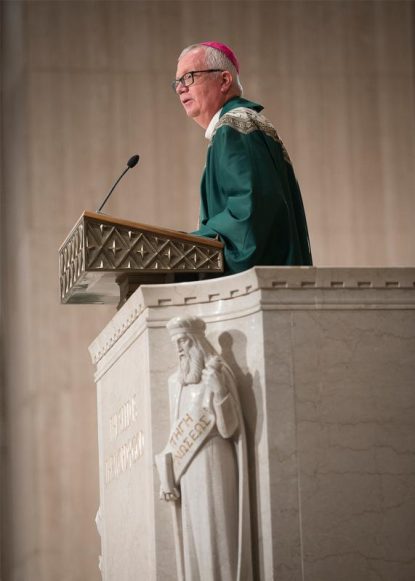 Bishop Donald J. Hying of Madison, Wis., delivers his homily at the Basilica of the National Shrine of the Immaculate Conception in Washington Jan. 26, 2020. He said June 23, that he “cannot remain” silent in response to remarks that protesters who are tearing down statues want to target “white” artistic depictions of Jesus and Mary. (CNS photo/Tyler Orsburn)

MADISON, Wis. (CNS) — Bishop Donald J. Hying of Madison June 24 denounced comments by a Black Lives Matter activist who said statues of Jesus Christ that depict him “with European features” need to come down “because they support white supremacy.”

As a shepherd of the Catholic Church, “I cannot remain silent. I need to denounce such a call to violence and destruction,” the bishop said, responding to a June 22 tweet by activist and writer Shaun King about “the statues of the white European they claim is Jesus.”

“Our statues, pictures, stained-glass windows, churches, icons and devotions are holy to us,” Bishop Hying said. “They are sacramentals, blessed and sacred, visible expressions of the love of God, poured out in the life, death and resurrection of Jesus, and made manifest in the saints.”

Bishop Hying’s remarks came in an open a letter posted on the website of the Catholic Herald diocesan newspaper, MadisonCatholicHerald.org, which addressed the broader issue of the need for the country to come to terms with its moral failings in its history as a nation, but to do so with a national educational effort and respectful discussion, not through destruction and violence aimed at statues and memorials.

Regarding King’s call for the “destruction of ‘white’ artistic depictions of Jesus,” the bishop said, “The principle of enculturation merits our reflection here.”

“In the Catholic Church, every culture, country, ethnicity and race has claimed Jesus and the Blessed Virgin Mary as their own,” Bishop Hying explained. “Our Lady of Guadalupe appeared to St. Juan Diego as a mestiza, African art depicts Jesus as Black, Asian depictions of the Blessed Mother, too, take on similarities of both bodily appearance and, often, cultural garb.

“In this context, are white representations of Christ and his Mother inherently signs of white supremacy?” he asked. “I think not. Because the Son of God became incarnate in our human flesh, does not all of humanity — every race, tribe and tongue — have the spiritual ability to depict him through the particular lens of their own culture?”

In recent weeks, he said, “we have witnessed the vandalizing and toppling of statues around the country which depict Confederate leaders, Christopher Columbus, St. Junipero Serra, Francis Scott Key, and anyone else deemed to be offensive to the vandals.”

“Even a monument recognizing the service of the first all-volunteer Black regiment of the Union Army during the Civil War was defaced in Boston,” he said.

“Law enforcement officers have done nothing to stop this destruction,” the bishop said. He pointed out that Popular Mechanics magazine even features “a current article detailing how to destroy ‘a statue that you decide you no longer like,’ utilizing science to do so.”

“This dynamic reached another stage” with King’s June 22 tweet, he said.

“As an avid reader of United States history, I know some of the torturous narrative of violence and oppression against both the Native peoples of this land and the African peoples brought here as slaves,” he wrote. “In my opinion, the injustices suffered by these peoples over the course of centuries are two of the greatest moral failures of our country, with deep repercussions in our culture.”

“We must study and know this history in order to transcend it, to learn from it and to commit ourselves to justice, equality and solidarity because of it,” he continued. “At the same time, even the worst aspects of history should be remembered and kept before our eyes. Auschwitz remains open as both a memorial and a museum, so that humanity never forgets the horror of the Holocaust.”

Bishop Hying said it would be “illuminating and healing” for the country “if we had a national education effort to understand our history in its totality, have respectful discussion about the proper way to commemorate people and events, such as Christopher Columbus, the European colonization of the Americas, the tragic suffering of slavery, the Civil War, Confederate leaders, the Founding Fathers, and the evangelization of our continent and then make measured decisions about statues, buildings and memorials.”

He asked: “If we allow the commemorative and visual history of our nation to be destroyed by random groups in the current moment of anger, how will we ever learn from that history? … Should certain statues be placed in museums or storage? Perhaps. Should we let a group of vandals make those decisions for us? No.”

In the Catholic Church’s missionary outreach, some “have mistakenly equated the fullness of Catholicism with European culture,” he said. “We have learned over time, as have others, to approach a different culture with respect and humility, recognizing the inherently authentic human elements already present in each person and place.”

“A robust proclamation of the Gospel will purify every culture of its negative and destructive elements, but will leave intact its beauty, goodness and truth,” Bishop Hying said. “Belief in Jesus as Our Lord and Savior only makes us more fully human and more deeply rooted in the worth of our respective culture and country.”

The statues, stained-glass windows, icons and the church’s other sacramentals that some, like King, would like to destroy, he said, “remind us of God, his love for us in Christ and the nearness of the divine.”

Catholics “must not surrender our religious liberty to the voices that seek the destruction of our public presence,” he said.

“Religious freedom, given to man by God himself, and guaranteed by our Constitution, allows us as Catholics to practice our faith, build our churches, pray in public, put up statues and crucifixes on our property, and serve the common good through a remarkable network of health care, schools and social services,” Bishop Hying said.

PREVIOUS: Federal executions in Indiana said to ‘add violence on top of violence’

NEXT: Florida bishops hail new law on parental consent before minor has abortion