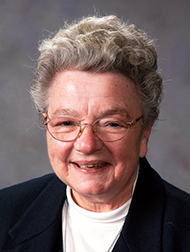 Sister Susan Immaculate Platt, I.H.M., died of natural causes June 26 in Camilla Hall, Immaculata at age 75 and in the 57th year of her religious life.

Born in Philadelphia to Addison and Catharine (Crossin) Platt, Susan Mary Platt attended Sacred Heart School in Philadelphia and Our Lady of Fatima School in Secane then graduated in 1963 from Notre Dame High School Academy in Moylan.

She entered the Sisters, Servants of the Immaculate Heart of Mary on Sept. 8, 1963. She received her habit and her religious name, Sister Susan Immaculate, on June 27, 1966, professed first vows on June 28, 1966 and would later earn A.B. and M.A. degrees.

From 2007 to 2017, Sister Susan served as a Learning Support Professional at St. Martin of Tours School, Philadelphia. She touched thousands of children’s lives throughout her loving ministry of service.

Sister Susan continued her ministry of service and prayer at Camilla Hall until her death.

The funeral Mass and interment were held privately July 1. Father William E. Dean was the celebrant and homilist for the Mass.

Sister Susan is predeceased by her parents Addison and Catharine, and her beloved Sister Catharine Platt, O.P. She is survived by her local community from Camilla Hall and her congregation of I.H.M. sisters.

NEXT: Father John McBride, former pastor and teacher, dies at 86