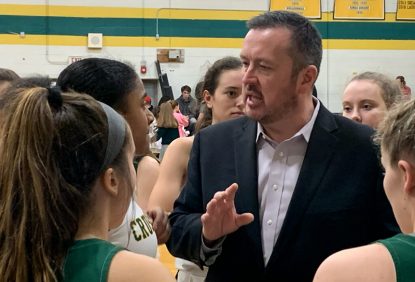 Lansdale Catholic coach Eric Gidney addresses his players during a win over St. Hubert last season. For the 2020-2021 season, LC will compete in the Catholic League Red Division. (Photo by John Knebels)

The 2020-21 Catholic League girls’ basketball standings have received a makeover.

After athletic directors recommended changes and received approval from the Philadelphia Catholic League’s Board of Governors, Archbishop Ryan will move from the Red Division to the Blue Division while Lansdale Catholic will switch from the Blue to the Red.

This decision is based on a one-year pilot plan and will be reevaluated upon the conclusion of the season.

Both programs experienced entirely different results last season. Ryan endured a winless campaign (0-12) in an extremely talented Red Division highlighted by five teams that had reached the PIAA state quarterfinals before the coronavirus pandemic ended their dreams of ultimately competing for a state title in Hershey.

In the Catholic League playoffs, the seven-seed Ragdolls overwhelmed 10-seed Conwell-Egan before losing to two-seed Neumann-Goretti, 67-34, in the quarterfinals.

In the Blue Division, Lansdale Catholic (10-0) convincingly twice dispatched St. Hubert, Conwell-Egan, Little Flower, John W. Hallahan and Bishop McDevitt by an average margin of 37.2 points. In the first round of the Catholic League playoffs, eight-seed LC more than doubled nine-seed St. Hubert, 62-30, but the Crusaders were then overwhelmed by top-seed Archbishop Wood, 81-42, in the quarterfinals.

While the decision was supported by Lansdale Catholic’s basketball community, it drew the ire and disappointment of several Ryan supporters. According to PCL athletic director chairperson Jake Serfass, the disparity of reactions is not surprising.

“One of the goals is to create fair competition,” said Serfass, who is also the Father Judge athletic director. “It’s understandable that everyone wants what’s best for their school; however, in sports, it’s tough to keep everybody happy.”

Lansdale Catholic benefitted from a much easier challenge last winter. In the previous two years in a one-division league comprised of 13 teams, the Crusaders’ records were 5-7 and 6-6, respectively. In both seasons, they defeated Bishop McDevitt in the first round of the playoffs before losing to Wood and Carroll, respectively.

“The program is excited for the switch, although we know what an enormous challenge it will be,” said LC coach Eric Gidney. “There is tremendous competition in the entire Philadelphia Catholic League, with the Red Division being even more difficult. The talent level of the teams and the experience and preparedness of the coaches is unmatched. Every night you have to bring your best. Ultimately it will make us better and tougher, and add the experience needed for a strong run into league, district and another deep run into state playoffs.”

Gidney is determined to guide his players through potential turmoil as they learn to navigate rugged terrain.
“It’s in the mindset mostly,” said Gidney. “Players tend to either get up or cower away from the big games versus tough opponents. As a coach, you want to stabilize that and always want them mentally and physically prepared no matter the opponent or score.

“One obstacle in life on and off the court that we can do our best to avoid is regret. If we give our maximum effort in preparation in every game, we might not come out as winners in every game, but we will never second guess and look back with regret.”

Edwards, who steadily improved as a scorer and rebounder, hence a second-team All-Catholic selection, can’t wait to get started.

“It’s very exciting to show everyone what we are capable of as a team even in a more difficult league, and it also pushes us to work even harder outside of games,” said Edwards. “We are really eager to get to play better competition and are nothing but motivated to put up good games against these competitors. I know it will make my teammates and I better all-around players and will give us the opportunities to push ourselves to the next level of our game.”

Lansdale Catholic athletic director Mark Princehorn appreciates how the PCL attempts to deliver a formative experience for all players.

“I think the Catholic League does a good job with trying to make things work for everyone, but it isn’t always an easy process because there are also individual needs to consider,” said Princehorn. “Whenever a situation needs looking into or reassessing, we listen to the coaches and talk together as ADs and try to come up with a fair solution. It doesn’t always work out perfectly, but it’s not for a lack of trying.”

Conversely, Archbishop Ryan feels like one poor season should not be considered enough of an impetus for the PCL to make what they consider a relatively drastic alteration.

In 2018-19, the Ragdolls went 7-5, defeated St. Hubert in the first round of the playoffs, and then stunned heavily favored Neumann-Goretti by forcing overtime in an eventual 67-61 defeat. In 2017-18, Ryan finished a misleading 7-5. The Ragdolls won their first seven and lost their last five, but in four of those five losses, the losing margins were by one, two, two, and three points. The PCL season ended with a loss to eventual champion Cardinal O’Hara.

“The pluses are, I guess, closer games,” said Ryan coach Mike McCusker. “The minuses are you don’t get to play against the best of the best. I was never in favor of it, and I am still not in favor of it.”

Ryan senior Luca Verello, the only returning starter on a team that lost second-team All-Catholic junior Tori Nigro via transfer to St. Basil’s Academy, would have preferred a chance to face the PCL’s top contenders.

Actually, the three-sport athlete doesn’t even support the current two-division alignment, a landscape that is not afforded any other Catholic League girls’ sport.

“As a senior I would be lying if I said finding this out didn’t disappoint me,” said Verello. “After a strong freshman and sophomore season, last year not winning a game in the Red Division was heartbreaking. Playing in the Red Division, we went up against strong competition, allowing us to grow as a team.

“As a team, our main focus shouldn’t be on what division we are in; rather, it should be about succeeding and playing our best each game. However, being a girls’ basketball player, I do not agree with the divided league. The fact that we are the only league that has the divisions is confusing.

“Playing girls’ soccer and lacrosse, we get to play all teams, and not being able to do the same in the basketball league is frustrating. I feel that with the level of skilled teams in the Catholic League, the divisions hold back opportunity to grow.” 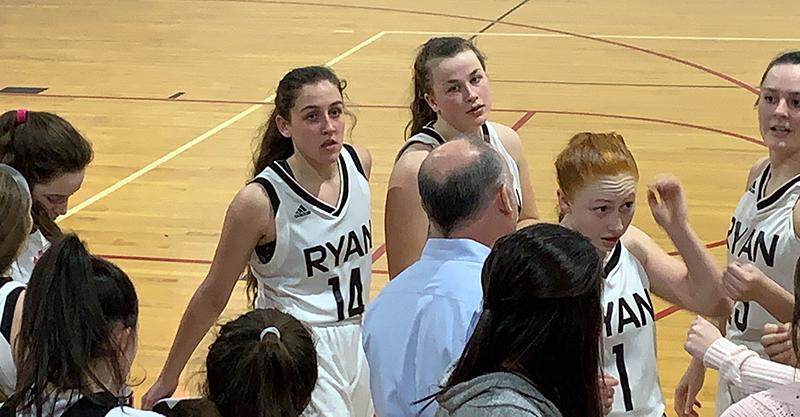 Senior Luca Verello (14) is Archbishop Ryan’s top returning player. The Ragdolls will compete in the Catholic League Blue Division in the 2020-2021 season. (Photo by John Knebels)

NEXT: Catholic athletes preparing to play this fall, unsure of season ahead