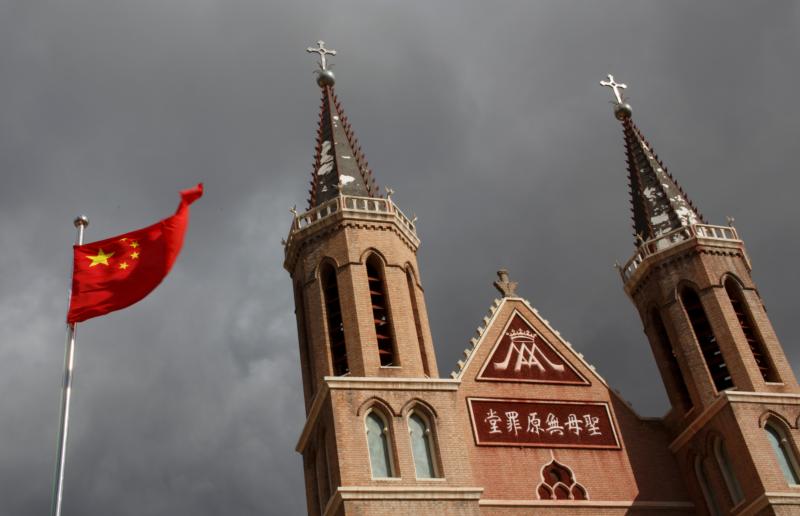 The Chinese national flag flies in front of a Catholic church in Huangtugang, China, in this 2018 photo. As the Vatican-China agreement on the naming of bishops approaches two years, Beijing is still lagging behind in giving concessions compared with those made ahead of the deal by the Vatican. (CNS photo/Thomas Peter, Reuters)

It is the third such concession made by Chinese authorities inside a month as it prepares for a new round of talks with the Vatican in Rome by the end of July. The talks are aimed at refreshing the provisional two-year September 2018 agreement on bishop’s appointments, reported ucanews.com. The talks will be the first between the two sides since November 2019, most likely due to travel restrictions and health concerns linked to the COVID-19 coronavirus.

Bishop Ma was installed at a public ceremony in Shanxi province July 9, reported ucanews.com. He became the sixth bishop from the unofficial church to join the Patriotic Association since 2018 agreement.

A participant seeking anonymity told ucanews.com that the ceremony was attended by about 20 priests and 100 faithful from Shuozhou Diocese, representatives the Patriotic Association and government-approved Bishops’ Conference of the Catholic Church in China; leaders from city and district departments; provincial groups and plainclothes police.

The reduced number of participants was attributed to restrictions linked to the COVID-19 pandemic. Only those who tested negative for the virus the day before the liturgy could attend, the participant said.

But Beijing is still lagging behind in giving concessions compared with those made ahead of the deal by the Vatican. Pope Francis lifted the excommunications of eight bishops consecrated without Rome’s authority. There are reportedly 21 bishops who have not registered with the government — sometimes referred to as underground bishops — who still are not recognized by Chinese authorities, leaving them at the mercy of often harsh local security forces.

But some bishops will not want to join the official church, a choice that Pope Francis has made clear is theirs to make.

“There could be another dozen or so to be recognized,” Francesco Sisci, veteran Beijing-based Italian journalist and scholar, told Catholic News Service. “The process is slow because many authorities are at play and the Chinese side wants to reach an internal consensus.”

Sources say there are myriad other unresolved issues between the two sides, such as the harmonization of dioceses between Rome and Beijing — although details of the deal have never been made public. The issues have come about largely due to demographic changes and political imperatives since Vatican diplomats were kicked out of China in 1951. One issue is also the recognition of the Bishops’ Conference of the Catholic Church in China, a competitor to Taiwan’s Chinese Regional Bishops’ Conference, which is recognized by Rome.

The deal has divided the church inside and outside China. Cardinals Joseph Zen Ze-kiun, 88, retired bishop of Hong Kong, and Charles Maung Bo of Yangon, Myanmar, president of the Federation of Asian Bishops’ Conferences, have criticized the current situation.

“Cardinal Pietro Parolin, the Vatican’s secretary of state, is the one who has in his hands the Chinese dossier. He clearly believes that such a position is necessary to open a new way for evangelization of the immense Chinese nation. I have strong doubts,” Cardinal Zen wrote in The Washington Post in December.

He questioned why the agreement was secret and added, “Obviously, because it was a bad agreement.”

In February, Chris Patten, the last British governor of Hong Kong, said the Vatican had “got it badly wrong about China” with regard to the deal, calling the timing “bizarre.”

“How can you have a rapprochement on religious issues with China when there are a million or more Uighur Muslims locked up in Xinjiang,” Lord Patten told British Catholic magazine The Tablet. “I find myself sympathizing hugely with Cardinal Zen.”

But the view of the Vatican and many other Catholics familiar with China is that dialogue is the only choice.

“Two years ago, some believed that no results would come out of the deal,” Sisci said, adding that the whole Catholic Church in China is in unity with Rome for the first time in decades.

“For the first time China, under no duress, is in a dialogue with the Holy See, something that didn’t happen even with the Jesuits” when they were at the Emperor’s Court in the 17th century.

Editors: Coverage of international religious freedom issues by Catholic News Service is made possible in part by Aid to the Church in Need-USA (www.acnusa.org).