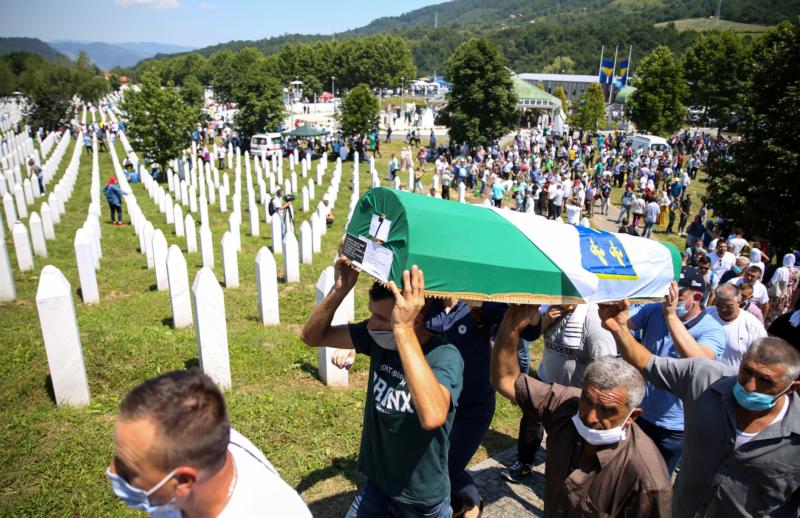 A casket is carried at a graveyard in Potocari, Bosnia-Herzegovina, July 11, 2020, during a ceremony marking the 25th anniversary of the Srebrenica massacre, Europe's worst since World War II. (CNS photo/Dado Ruvic, Reuters)

Father Drazen Kustura, spokesman for the Sarajevo Archdiocese, told Catholic News Service it was “essential the general public knows the truth about events at Srebrenica, as well as about the many other places where terrible crimes took place.”

“The road to a better future begins with facing the past, and there are internationally confirmed verdicts that the horrific crime of Srebrenica was an act of genocide. It seems to me the greater crime lies in denying what has been done,” he said July 16.

More than 8,100 men and boys — mostly Muslims — were shot and thrown into pits during a 10-day killing spree in July 1995, after Bosnian Serb forces seized Srebrenica, a United Nations-declared safe zone, from Dutch peacekeepers.

Their commander, Gen. Ratko Mladic, was jailed for life in 2017 for crimes against humanity by the International Criminal Court, which also ruled the massacre an act of genocide.

Father Kustura said that, each July, Bosnia-Herzegovina’s Muslim-Croat federation holds a Day of Mourning for innocent victims of the 1992-95 war. However, he said, the day is treated as a normal day in the country’s Serb republic.

“A lot of blood was shed in the Balkans during the 20th century, and that’s why it’s important to build a sense of respect for the victims and for religious leaders to visit places of suffering together,” said Father Kustura.

“When they pray for the victims together, they send out a message that it’s possible to build peace, live together and find strength to forgive.”

In a message for commemorations at Srebrenica, Archbishop Luigi Pezzuto, Vatican ambassador to Bosnia-Herzegovina, said the pope was “present in spirit” with “those carrying scars from the terrible tragedy,” but regretted “the hatred which contributed to such bloodshed is still too often present in different parts of the world.”

Bosnian Cardinal Vinko Puljic said he hoped to help build “a public culture of respect for all victims, regardless of their national or religious affiliations, thus encouraging representatives of all religious communities to respect each other’s victims.”

Marie-Janine Calic, a German historian and U.N. adviser, told the German Catholic news agency KNA the Srebrenica massacre had become a source of identity and “myth of origin” for many Bosnian Muslims, whereas schools in the Serb republic were still being named after Mladic and other war criminals.

Father Kustura said mass participation in the 25th anniversary had been prevented by the coronavirus pandemic, but added that Bosnia-Herzegovina’s Catholic Church would always be “on the side of the common man” in commemorating atrocities.

Mostly ethnic Croatian Catholics make up 15% of the 4.3 million citizens of Bosnia-Herzegovina, with Muslims and Orthodox Serbs making up 48% and 37%, respectively.