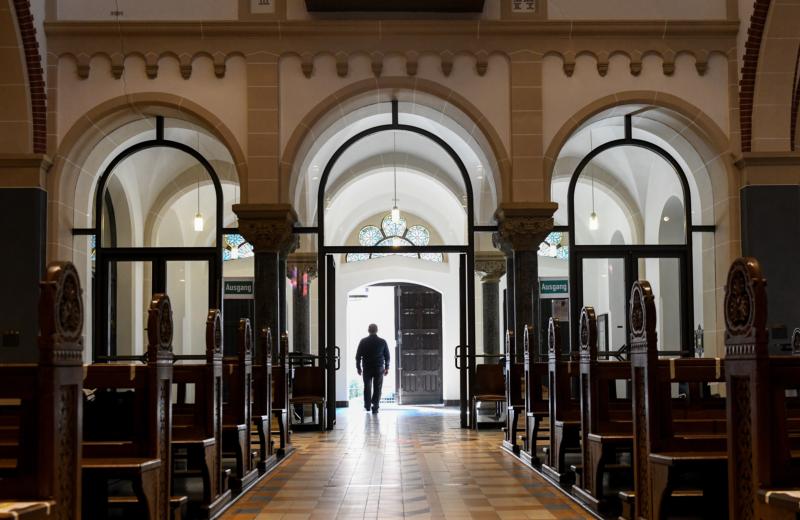 A man leaves an empty church in Bonn, Germany, June 12, 2020. The Vatican instruction on the reform of Catholic parishes continues to stir debate in Germany, where some bishops say the current parish model with a priest in charge is no longer sustainable because of a lack of vocations. (CNS photo/Harald Oppitz, KNA)

BONN, Germany (CNS) — The Vatican instruction on the reform of Catholic parishes continues to stir debate in Germany, where some bishops say the current parish model with a priest in charge is no longer sustainable because of a lack of vocations.

Cardinal Walter Kasper defended the paper following widespread criticism, such as by Bishop Franz-Josef Overbeck of Essen, who said: “In no manner does the instruction take note of the fact that we in Germany — but also in many other countries of the universal church — can no longer shape church life according to the model of the people’s church we have known up till now.” Critics especially cited the lack of priests.

The German Catholic news agency KNA reported that, in a guest commentary for the church website domradio.de in Cologne, Cardinal Kasper wrote: “The German criticism completely misses the actual point of the instruction, the pastoral conversion to missionary pastoral work.”

Cardinal Kasper, who was responsible for ecumenical relations at the Vatican for many years, said the first chapters of the document and the summary made extensive reference to the common responsibility of the whole congregation. Emphasizing the responsibility of the parish priest was theologically legitimate, he said.

He added that the “perennial debate” over celibacy, the ordination of women priests and management teams was causing uncertainty, which was to blame for the shortage of priests, alongside other factors. The cardinal said the document tied bishops to enforceable criteria if they want to restructure parishes.

The 22-page document, titled “The pastoral conversion of the parish community in the service of the evangelizing mission of the church,” was released by the Vatican’s Congregation for Clergy July 20.

While it does not introduce new legislation on pastoral care, the Vatican press office said it was developed by the congregation as a guide related “to the various projects of reform of parish communities and diocesan restructuring, already underway or in the planning process.” It also clarifies the role of the deacons, consecrated men and women, as well as the laity, in dioceses where there is a shortage or lack of priests.

Bishop Gregor Maria Hanke of Eichstatt said the instruction provided valuable impetus for a missionary awakening in the parishes.

“The document encourages and supports all those who have already taken such paths,” Bishop Hanke said July 28.

“Pastoral conversion as a vitalization of the missionary spirit should renew the local church, the parish with its traditional structures. This renewal process is done through evangelization.” Bishop Hanke said the instruction from Rome should not be seen as “a struggle for the roles in the church or being in terms of winners and losers.”

“As learners we gladly accept suggestions,” Bishop Feige wrote in pastoral letter to members of his diocese. “As a bishop, however, I won’t let myself be paralyzed and blocked by their restrictive orders, since much in it is quite unrealistic — especially with regard to our extreme diaspora situation, which they evidently cannot imagine — and since no positive solutions are indicated in view of the mounting lack of priests.”

Bishop Feige said the document will demotivate some people from working for the Catholic Church at all. He warned that the structure of the church will change even more dramatically than before.

“It does not help at all just to conjure up noble principles and to refer to canonical guidelines,” he said.

Instead, there should be a responsible, sensitive and creative consideration of what form parishes can survive in given the circumstances.

Bishop Franz-Josef Bode of Osnabruck called the instruction “a strong brake on the motivation and the appreciation of the services of laypeople.” Bishop Bode is chairman of the forum on the role of women in the church, one of four forums of the Synodal Path reform dialogue in the Catholic Church in Germany, and deputy president of the German bishops’ conference.

He said the Vatican instruction had taken the bishops completely by surprise and that he would have expected it to be preceded by an examination of the realities of local parish life on the ground, and to have shown greater respect for the frequently pledged synodality.

Bishop Peter Kohlgraf of Mainz wrote in a statement that he could “not simply accept” what he described as an “interference” in his episcopal office. The pastoral theologian said the instruction left him worried about “the many who are (still) committed.” He stressed: “Soon they will have (had) enough if their commitment is only suspiciously watched and evaluated from on high.”

He added that he was worried about the priests in his diocese.

“We can’t fill vacant positions as it is. Many priests complain that they are overwhelmed by the administration and bureaucracy.” He said it also seemed “absurd to have every merging of parishes approved by Rome on a case-by-case basis.”

The Vatican instruction bars laypeople from leading parishes and emphasizes the role of priests. It directly opposes efforts to hand over the management of parishes to teams made up of priests and dedicated church members as well as other staff.

Cardinal Beniamino Stella, head of the Vatican’s Congregation for Clergy, told KNA he would be happy to speak with the bishops to alleviate their concerns about the document.

Earlier in July, KNA reported that in the Munster Diocese, the pastoral guidance of a Catholic parish is being conducted by a layman and not a priest. The diocese called it an experiment with a new governance model. The parish was to be headed by a pastoral assistant, who has a degree in theological studies. His job is to perform pastoral care, but pastoral assistants are not ordained priests and may marry and have a family.

“There are simply not enough priests around who can assume the duties of a leading pastor,” stressed Munster Auxiliary Bishop Christoph Hegge.

Similar leadership models have also been introduced in other dioceses, in some cases with women holding positions. For example, the Osnabruck Diocese appointed a woman as the pastoral envoy for the North Sea island of Langeoog, supported by a “moderating priest” from the diocese.

The Vatican recently stopped plans drafted by the Trier Diocese to establish 38 large-scale parishes to be co-led by a priest and a group of laypeople.

Matthias Kopp, spokesman for the German bishops’ conference, said the bishops will carefully study the Vatican document and discuss it at their next meeting.

NEXT: Jesuits’ global leader warns of pandemic’s threat to democracy