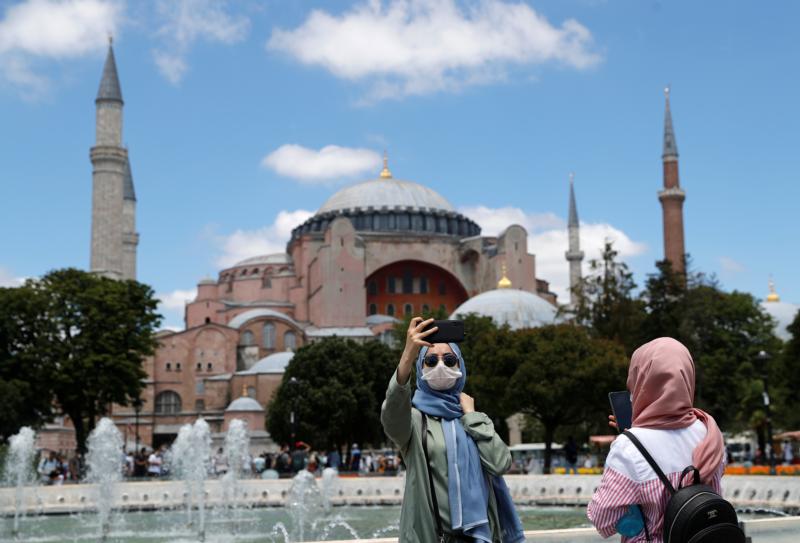 A woman poses for a selfie in front of Hagia Sophia in Istanbul July 11, 2020. (CNS photo/Murad Sezer, Reuters)

VATICAN CITY (CNS) — Pope Francis said he was saddened after a Turkish court ruled to revert the iconic Hagia Sophia museum into a mosque.

While commemorating the International Day of the Sea during his Sunday Angelus address July 12, the pope told pilgrims in St. Peter’s Square that “the sea carries me a little farther away in my thoughts: to Istanbul.”

“I think of Hagia Sophia, and I am very saddened,” he said.

Turkish President Recep Tayyip Erdogan issued a decree to hand over control of Hagia Sophia to the country’s Directorate of Religious Affairs after Turkey’s highest court revoked its status as a museum July 10.

In a video message after the court ruling, Erdogan said that Hagia Sophia will remain “open to all locals, foreigners, Muslims and non-Muslims.”

The pope’s comments on the decision was the latest from world and religious leaders who criticized the ruling, including Orthodox Ecumenical Patriarch Bartholomew of Constantinople.

In a homily during a June 30 divine liturgy, the patriarch warned that the decision “will push millions of Christians around the world against Islam.”

It is “absurd and harmful that Hagia Sophia, from a place that now allows the two peoples to meet us and admire its greatness, can again become a reason for contrast and confrontation,” he said, according to Fides news agency.

Echoing the patriarch’s words, Ioan Sauca, interim general secretary of the World Council of Churches, expressed his concern that the decision will “inevitably create uncertainties, suspicions and mistrust, undermining all our efforts to bring people of different faiths together at the table of dialogue and cooperation.”

In a July 11 letter to Erdogan, Sauca urged the Turkish president to reverse his decision “in the interest of promoting mutual understanding, respect, dialogue and cooperation and avoiding cultivating old animosities and divisions.”

The decision was strongly condemned by Archbishop Elpidophoros of the New York-based Greek Orthodox Archdiocese of America, who called the decision “the worst example of religious chauvinism.”

“By shuttering Hagia Sophia as a monument, Turkey has shut the window that (Mustafa Kemal) Ataturk opened to the world,” he tweeted July 10.

The cathedral, founded by Emperor Justinian I on the site of two earlier churches, was the world’s largest at its dedication in 537.

Hagia Sophia remained a cathedral for the Byzantine Empire until 1453, when it served as a mosque following the Ottoman capture of Constantinople, today’s Istanbul, for nearly five centuries.

Under Ataturk, the founder of modern Turkey, it then became a museum in 1935. It was declared a World Heritage site by UNESCO in 1985.

Audrey Azoulay, director general of UNESCO, issued a statement July 10 saying the decision was “regrettable” and “made without any form of dialogue or prior notice.”

“UNESCO calls upon the Turkish authorities to initiate dialogue without delay, in order to prevent any detrimental effect on the universal value of this exceptional heritage, the state of conservation of which will be examined by the World Heritage Committee at its next session,” Azoulay said.

Critics of the move have also accused Erdogan’s government of using the decision to boost support for his governing Justice and Development party amid economic hardships exacerbated by the COVID-19 pandemic.