Pope thanks pilgrim with disability who walked along Spain’s ‘Camino’ 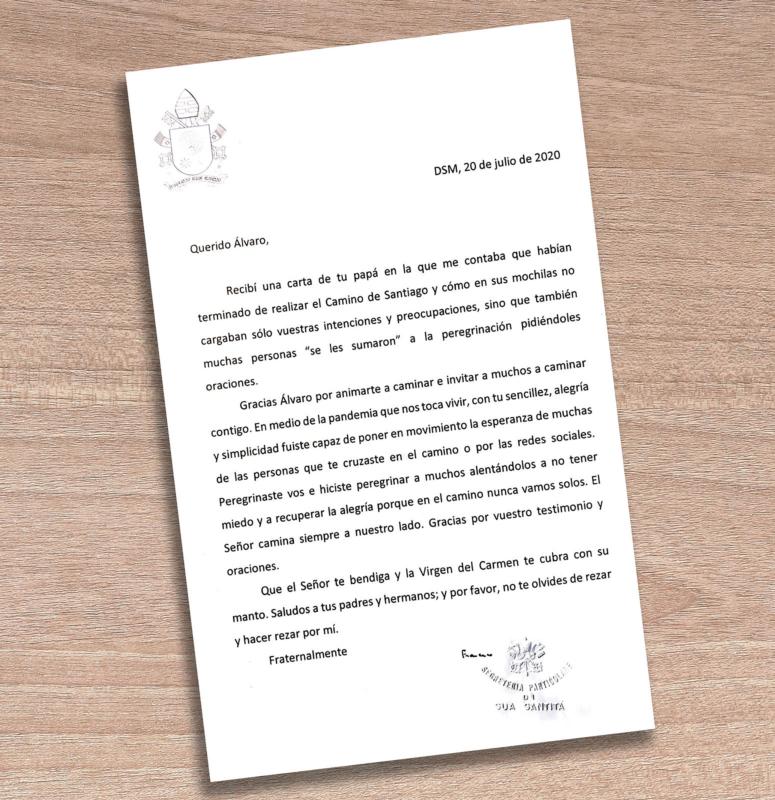 In a letter dated July 21, 2020, Pope Francis thanked Alvaro Calvante, a young pilgrim with a disability who made a 60-plus-mile trek along Spain’s Camino de Santiago de Compostela. The pope commended the youth for inspiring others to “recover their joy” and to undertake their own pilgrimages. (CNS photo/Twitter @CaminodeAlvaro)

VATICAN CITY (CNS) — Pope Francis sent a letter of gratitude to a Spanish teen with an intellectual disability after the 15-year-old traveled more than 60 miles along the famed Camino de Santiago de Compostela.

In a letter signed July 21 and published on the website of the Diocese of Malaga, Spain, the pope said he learned of Alvaro Calvante’s journey after receiving a letter from the pilgrim’s father.

“Thank you, Alvaro, for being inspired to walk and inviting many others to walk with you,” the pope wrote. “Amid the pandemic we are experiencing, with your simplicity, joy and humility, you were able to put into motion the hope of many of the people you met on the road or through social networks.”

“You went on pilgrimage and made many people go on pilgrimage, encouraging them not to be afraid and to recover their joy because, on the road, we never go alone. The Lord always walks beside us. Thank you for your testimony and prayers,” he wrote.

According to the diocese, Calvante is the seventh of 10 brothers and is a member of the Neocatechumenal Way in a parish in Malaga.

“His intellectual disability is not an impediment to participating very actively in parish life, and his joyful experience of faith is a witness to all who know him,” the diocese said.

The young pilgrim and his father chronicled their 62-mile trek, which began in the northwestern Spanish city of Sarria, covering the final leg of a journey that many begin nearly 500 miles earlier, through the mountains in France. The youth’s Twitter account, @CaminodeAlvaro, gained 3,500 followers after opening in early July; many people sent him their prayer intentions.

Calvante’s father tweeted a picture of the letter July 21 and thanked the pope for his words, received “with true love.”

“Today, we are on pilgrimage to the birthplace of St. Dominic de Guzman. We read the letter here, and we prayed for His Holiness as Alvaro does every day and every hour. May God bless him!” the father tweeted.