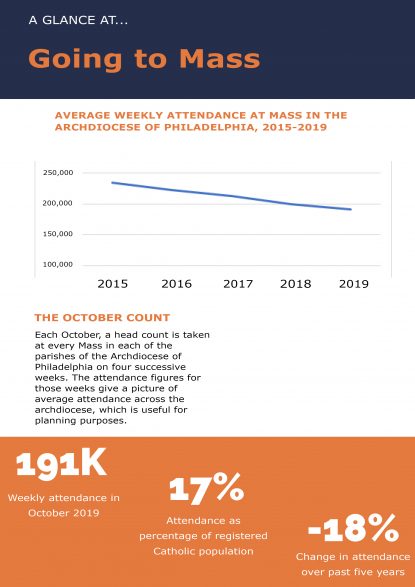 How many Catholics in the Archdiocese of Philadelphia are in church on a typical weekend? The answer is 191,229, according to a report by the archdiocesan Office for Parish Service and Support, based on the most recent head count taken in October 2019.

For many years this statistic was not tabulated. It is not the total of the number of Catholics in the archdiocese, which was 1,085,225 in 2019.

That is based on parish registration figures and is probably fairly accurate, although not everyone who moves into a parish registers there, nor notifies the parish when they leave.

History of the October Count

The archdiocese has always had accurate figures of how many baptisms, confirmations, marriages and funerals there were in a parish in a given year.

But it wasn’t until 1990 that the archdiocese decided to take an official Mass attendance count. The figure really is important, for example in deciding how many priests should be assigned to a parish, given that the number of priests ordained annually was declining, and whether the parish could be sustainable if too few people were attending Mass.

The decision to do the head count at every Mass in four weekends during October made sense. Most folks would not be away on a vacation and there wouldn’t be any snow or probably any other event that might skew the figures.

Taking the average of four weekends made sense too, because one very rainy weekend might give an inaccurate picture of normal attendance.

Going in, no one knew what the total would be. Obviously, invalids and small children might not be in church and some adults might be away or have drifted away from the church, but Catholics in general had a reputation for being churchgoers. The attendance number might even be as low as 50% of registration, was the thinking.

The result was a bit of a wake-up call. It showed approximately one-third of all Catholics attended church regularly. Although the article that followed in the former Catholic Standard and Times was titled “Present in the Pews,” the real story as everyone could see was “Absent from the Pews.”

But the story of Mass attendance really isn’t all gloom and doom. There are parishes that attract considerably more people than 17.6% of their population.

In some cases it is simply because they are near a college or other institution where nonresidents drop in for Mass. But there is something to be said for a charismatic pastor.

A prime example of that is the archdiocese’s largest parish, St. Andrew in Newtown, which under the pastorship of Msgr. Michael Picard continues to be the leader with 7,538 people attending, or on average 36%, at Mass any given weekend.

In some cases parishes have a higher proportion of Mass-goers relative to their parish membership because a number of worshipers do not live in the parish. Perhaps the parish has a convenient and accessible location, or it is located near colleges or hotels, or has special liturgies, often in a language other than English.

At this time there are 19 parishes that draw worshipers, resident or nonresident, equal to at least 35% of their listed registration.

Typical of this group is St. Joseph Parish in Collingdale, where Father Thomas Sodano, the pastor, applies a personal touch, and not just a handshake at the door. He had 51% of registered parishioners in attendance last year.

“I never hound them for money,” Father Sodano said. “I build them up for what they do. It’s a hard-working, blue collar neighborhood, mostly Caucasian but some Hispanic. People are here and they die here. Everyone knows everyone. They are people who are generous for their means.”

“Whenever there is a sick call, I try to answer it within the hour,” said Father Sodano.

Most people send lots of Christmas cards every December. In Father Sodano’s case, his cards go out March 25, the Feast of the Annunciation. He sends everyone a card, including the kids, as well as many non-parishioners. Because the feast also marks the conception of Jesus, in a way it’s a pro-life gesture.

If Father Sodano is experiencing more Hispanic Catholics in his parish, he is not alone. One of the other areas the Office of Parish Services and Support tracks is the number of Masses celebrated in a language other than English.

At this time, according to the office’s report, there are Masses celebrated in 20 different languages. There were 12,886 Catholics attending the 48 Masses in Spanish and 5,788 people attending the Masses in other languages.

Nothing in the statistics suggests the recently arrived attend Mass more frequently than native-born Americans, but without them, the archdiocesan Mass count would have been 172,555, not 191,229 — a difference of 18,674 attendees.

Past history suggests the descendants of immigrants are eventually absorbed into the English-speaking culture. For example in past generations, tracing back to even before Philadelphia was a diocese, parishes were founded to serve people of the various non-English speaking nationalities. The first was Holy Trinity in the Old City neighborhood of Philadelphia, founded in 1798 for German Catholics.

There was never a designated Irish parish because although they were the largest Catholic group of immigrants before the 20th century, they arrived speaking English. Today most of those ethnic parishes are closed.

Now of course now the majority of non-English speaking arrivals have Spanish as their native tongue. But if the past is an indicator, their children and their children’s children will speak English.

Whether in the past or in the present, we are all part of the One, Holy, Catholic and Apostolic Church, thanks be to God.