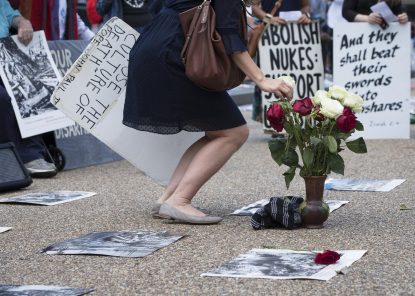 In this 2018 file photo, peace activists hold a Catholic prayer service of repentance near the White House for the use of nuclear weapons on Japan during World War II. Bishops from Japan and the U.S. explored Catholic efforts to end the danger of nuclear weapons during an Aug. 3, 2020, webinar commemorating the 75th anniversary of the nuclear bomb drop on Hiroshima and Nagasaki. (CNS photo/Tyler Orsburn)

CLEVELAND (CNS) – The president of the U.S. Conference of Catholic Bishops echoed Pope Francis’ long-standing call for full nuclear disarmament as the 75th anniversary of the atomic bombings in Japan approached.

Archbishop Jose H. Gomez of Los Angeles in a July 30 statement urged world leaders to “persevere in their efforts to abolish these weapons of mass destruction, which threaten the existence of the human race and our planet.”

He also said the bishops of the U.S. “mourn with the Japanese people for the innocent lives that were taken and the generations that have continued to suffer the public health and environmental consequences of these tragic attacks.”

U.S. military forces dropped bombs on the Japanese cities of Hiroshima and Nagasaki on Aug. 6, 1945 and Aug. 9, 1945, respectively, bringing an end to World War II.

The archbishop also called for prayers, specifically to Mary the queen of peace, “for the human family and for each of one of us.”

“Remembering the violence and injustice of the past, may we commit ourselves to being peacemakers as Jesus Christ call us to be,” he said. “Let us always seek the path of peace and seek alternatives to the use of war as a way to settle differences between nations and peoples.”

The anniversary is being commemorated through webinars, vigils, prayer services, special liturgies and the release of a book that includes presentations from a 2017 nuclear disarmament conference at the Vatican.

Among the events is an Aug. 6 webinar, “Pondering Hiroshima: ‘The Bomb’ at 75,” sponsored by the Institute for Human Ecology at The Catholic University of America, America Media and the Lumen Christi Institute.

Registration is required to join the event at https://bit.ly/2PpY7g2.

Elsewhere, from Ithaca, New York to Des Moines, Iowa, Catholic Worker communities and people of faith have planned various events Aug. 6-9 to call for nuclear disarmament and an end to war. Among the most ambitious will find Catholic Workers and Veterans for Peace gathering at the Iowa Air National Guard base in Des Moines, the home of a military drone command center, for a four-day vigil beginning Aug. 6.

Pax Christi USA has called on people to “pray, study and act” during the anniversary period and beyond as a way to live out the peace of Jesus. Resources, prayer, links to stories about the survivors of the bombings, known as hibakusha, are available at www.paxchristiusa.org.

The anniversary has prompted a renewed push by Pax Christi International and International Campaign to Abolish Nuclear Weapons, the 2017 Nobel Peace Prize recipient, and other peace organizations to encourage countries to ratify the Treaty on the Prohibition of Nuclear Weapons,  which was approved in 2017 by a majority of United Nations member states. The Holy See became one of the first entities to ratify the agreement.

Information on the effort is online at https://paxchristi.net/advocacy/the-nuclear-weapons-ban-treaty.

Titled “A World Free from Nuclear Weapons: The Vatican Conference on Disarmament,” the book includes the text of Pope Francis’ address in which he abandoned the church’s long-standing embrace of nuclear deterrence and called for the abolition of such weapons.

He also became the first pontiff in the nuclear age to categorize nuclear arms as weapons of mass destruction, the same status as land mines and chemical weapons.

The book includes contributions by seven Nobel Peace Prize laureates on the topic.