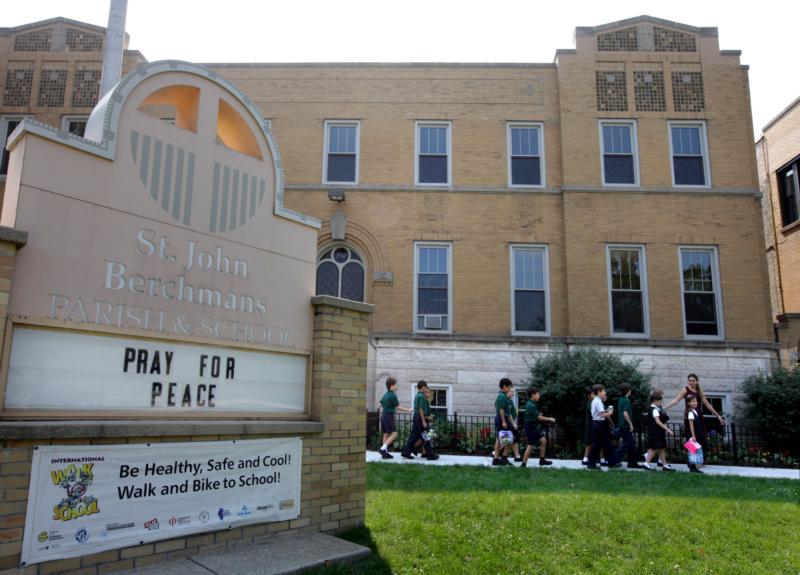 WASHINGTON (CNS) — As the pandemic has “disproportionately affected” predominately Black communities and the Catholic schools that serve them, Congress must provide immediate financial help to families who have chosen these schools for their children’s education, said the chairmen of three U.S. bishops’ committees.

“We are imploring your help for these families” in the next economic stimulus bill currently under consideration by Congress, the bishops said in a July 30 letter to U.S. Rep. Karen Bass, D-California, chairwoman of the Congressional Black Caucus.

They asked for Congress to designate emergency funding for direct scholarship aid to low- and middle-income families with children in Catholic schools and other nonpublic schools.

“Catholic schools are facing a crisis at this very moment,” the three bishops said. “Over 130 schools have already announced permanent closure, including schools in Chicago, Philadelphia, Baltimore, Boston, New Jersey and New York. These closures are disproportionately harmful to low-income and Black children who are educated in urban schools.”

They cited a recent survey of Catholic school principals showing that currently 10% “are uncertain about their ability to open in the fall.”

“This equals over 500 Catholic schools and thousands of families in turmoil,” the bishops said. “Strong action from Congress could provide these families and schools the confidence they need to stay in the Catholic school of their choice.”

Catholic education has played a significant role “in lifting many from poverty to a more hopeful future,” they noted. “Catholic schools bring cohesion to communities and increase family involvement in schools,” and inner-city Catholic school parents in particular “report taking an active role in their children’s education.”

The bishops pointed out that the public school community has requested another $300 billion in the next coronavirus aid package.

“We ask that families of nonpublic schools be considered as a part of the comprehensive needs of K-12 education, since nonpublic students represent 10% of the K-12 student population,” they wrote. “Therefore, 10% of what is made available to public schools should be directed specifically to the nonpublic school community to provide direct aid to families in the form of means-tested scholarships.”

They added: “Black families attending Catholic schools are counting on you, as are families with children in public school. Please do not leave them behind just because they value the historical and time-tested benefit of our Catholic schools for their children.”

The first economic stimulus package passed by Congress and signed into law by President Donald Trump in March was as $2 trillion economic relief package that included $16.5 billion for states and school districts as emergency relief and to stabilize education.

The Democratic-led House passed its second stimulus package in May. Called the Health and Economic Recovery Omnibus Emergency Solutions Act, or the HEROES Act, the House bill offers a $3 trillion package, including $58 billion for grades K-12.

On July 27 the Republican-led Senate introduced its stimulus package: the HEALS Act, which stands for Health, Economic Assistance, Liability and Schools, is about a $1 trillion package and includes $70 billion to K-12 that open for in-person classes.

In the mix in the Senate is the School Choice Now Act, sponsored by Sens. Tim Scott, R-South Carolina, and Lamar Alexander, R-Tennessee. It would redirect some coronavirus-relief funding to school-choice programs, so families can continue to send, or choose to send, their children to nonpublic schools they feel offer the best education for them.

The two chambers have begun negotiations to reconcile the two measures.

They said lawmakers should include in the stimulus bill funding for scholarship assistance for families “who are economically disadvantaged and need such support.” These scholarships would be used at Catholic or other nongovernment elementary or secondary schools.

They suggested Congress adopt a federal scholarship tax credit modeled after successful state-level credits, and in this way allow families to “provide the best education for their children and stabilize enrollment in Catholic and other nongovernment schools.”

NEXT: Tumult of 2020 may draw young voters in big numbers