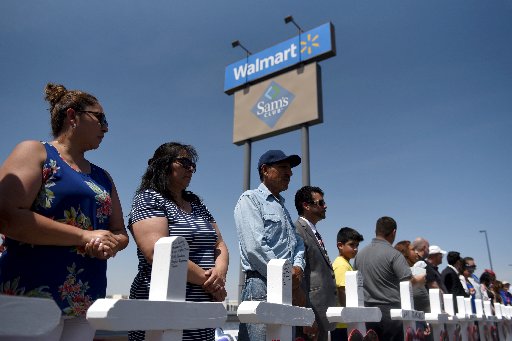 People stand near crosses Aug. 5, 2019, in honor of the victims of a mass shooting Aug. 3 at a Walmart store in El Paso, Texas. In an interview with Catholic News Service, El Paso Bishop Mark J. Seitz reflects about the tragic event a year after the killings that profoundly impacted him and his community. (CNS photo/Callaghan O'Hare, Reuters)

WASHINGTON (CNS) — The people of El Paso, Texas, did the best they could, under extraordinary circumstances, to remember the 23 lives taken after the bloody event that summer day a year ago.

The COVID-19 pandemic, and the social-distancing restrictions it has brought about, greatly limited El Paso’s ability to gather as a community and process together the lingering effects of a mass shooting by a gunman who opened fire on Latinos at a Walmart in their city Aug. 3, 2019.

But with creativity, on Aug. 3, 2020, El Pasoans organized a drive-thru luminaria memorial with 23 humanlike figures nearby, each decorated with flowers, to remember those who never made it out of the superstore alive as well as those who would never recover from the physical damage of the rifle attack inside the store that day. City leaders unveiled a plan for a permanent monument to them and read aloud the names of the dead with some family members present.

Besides the 23 lives the gunman took, his assault left more than two dozen others wounded.

News stories abounded with the word “resilience,” referring to the community, but the truth is more complicated.

Has the past year brought healing?

“Yes, to a certain extent, and then no,” said Fernie Ceniceros, director of communications for the Diocese of El Paso, who lives in the neighborhood where the shooting took place. “COVID-19 has made it harder to process. It’s kind of like, you just weathered the storm and then a hurricane came and made even more trouble for all for you.”

In April, Guillermo Garcia, 36, the last patient in the hospital with injuries from the shooting died. El Paso’s Bishop Mark J. Seitz had been visiting him but because of the pandemic regulations, the visits came to a stop. For many, there’s a feeling of not having been able mourn his death properly.

Such moments have left some El Pasoans like Ceniceros with a sense of interrupted closure and lingering questions.

Ceniceros was supposed to go that day to that particular Walmart to do the family shopping but was delayed because he was playing with his daughter and then went on a longer-than-expected visit to the gym. As he tried to drive into the parking lot where the Walmart is located, the entrance was blocked and he saw “a white person being escorted into a vehicle,” and helicopters overhead. Initially, he wasn’t alarmed but then he called his boss, Bishop Seitz.

“I speed-called Bishop Mark,” to tell him that something was going on, Ceniceros recalled, and then had the feeling that “I need to get outta here … for whatever reason.”

A year later, during the memorials and remembrances he attended with the bishop and at other moments, Ceniceros said he found himself wondering why his life was spared. If he’d left the gym earlier, if he hadn’t stopped to play with his daughter, he would have been at the store when the shooting occurred, maybe crossed paths with the gunman in the parking lot.

Patrick Crusius, the 21-year-old suspect from Allen, Texas, faces federal capital murder charges for hate crimes and is awaiting trial. Authorities have said the attack at the Walmart was believed to have been aimed at Latinos, as the alleged shooter reportedly told authorities that he was targeting “Mexicans.”

“It’s been a year of constantly thinking about … every which way you could think about it. Whether it was an attack on you and your race… You think all kinds of crazy things, but the reality is, yeah, I would have been targeted … I’m a first-generation Mexican-American. He would absolutely have targeted me,” said Ceniceros.

For Bishop Seitz, the attack was an assault on those he considers family.

“It was a reckoning of sorts, for me, realizing that racism isn’t just past history,” Bishop Seitz said in an Aug. 4 interview with Catholic News Service. “It isn’t simply a crazy ideology that some deluded people hold, but it is a way of speaking that is killing, that kills people. And it killed members of my family, in the sense that (it killed) the people that I’m called to serve as a shepherd and whom I love.”

Healing, he said, is “going to be a long process, especially for those who are directly impacted.”

“I’ve walked with them this last year, I’ve experienced with them their pain, their terrible loss. The ways that that experience has completely changed their lives, the lives of their loved ones forever,” he said.

It’s too soon to say that the community has mended, he said.

But he said it’s been gratifying to see that El Pasoans, as much as they have been able to during a pandemic, showed those still mourning that they’re not alone, that “they’re part of a community that really loves them, including the church community.”

Personally, he said, it’s been difficult to see how people of color, and not just Latinos, who seemed to be the targeted group in the attack, but also African Americans in the diverse and binational community of El Paso “have lost their sense of security, their sense of possibilities. Their innocence, in a certain way, has been removed.”

“It is painful and it’s just hard to even imagine that people could look at these beautiful brothers and sisters of theirs, and think that they were, somehow, not brothers and sisters. That it doesn’t matter if they’re killed somehow. I still can’t begin to comprehend that way of thinking, but I know that it’s real. We can’t just shuffle it under the rug without dealing with it,” he said.

A couple of days before the first anniversary of the shooting, the bishop announced the formation of a commission on race and equity, one aimed at dialogue among different groups but also directed at making structural changes.

“One thing I’ve learned is that the church has an opportunity to do things that maybe others aren’t in a position to do,” he said. “We transcend the ideological and partisan divide that is present, and we can speak to different members of the community and provide a kind of a safe place to gather. There’s no way that, without looking at the roots of division and the roots of racism, change can take place, unless we cross the partisan divides and the different things that keep us apart.”

From a spiritual leader’s point of view, Bishop Seitz said that, like other priests in his diocese, he has found a renewed sense in his priestly ministry, even as he’s been surrounded by pain. He has visited the families of the dead and survivors.

“I think as a priest, and now a bishop, I have a sense that the reason I exist, if you will, the reason I’ve received this calling, is so that I could bring God into the midst of situations where he’s needed most, and also bring consolation to people and help in the midst of these circumstances where they feel so alone and without a sense of direction,” he said.

“I’ve come to see that my presence as a priest, the presence of the church, in general, is one of the only things that can truly make a difference for people in those moments,” he continued.

“The rest sounds so much like just words … just saying ‘things are going to get better’ or ‘keep their memories alive’ — all of that sounds hollow. But that I could bring something to people that really truly makes a difference and helps them find the courage and strength to carry on.”

“So, while it’s an emotional experience for me,” he added, “it’s one that fulfills me in a certain way, helps me to feel that this is something that gives me purpose.”

Guiding a flock and tending to a community after a traumatic event on a grand scale is not possible without help from above, he said, and remaining in steady service to the people of God.

“It’s not something one can ever truly anticipate or prepare for,” Bishop Seitz said. “To me, it’s a reminder that one has to keep his spiritual life strong because you can’t give what you don’t have.”