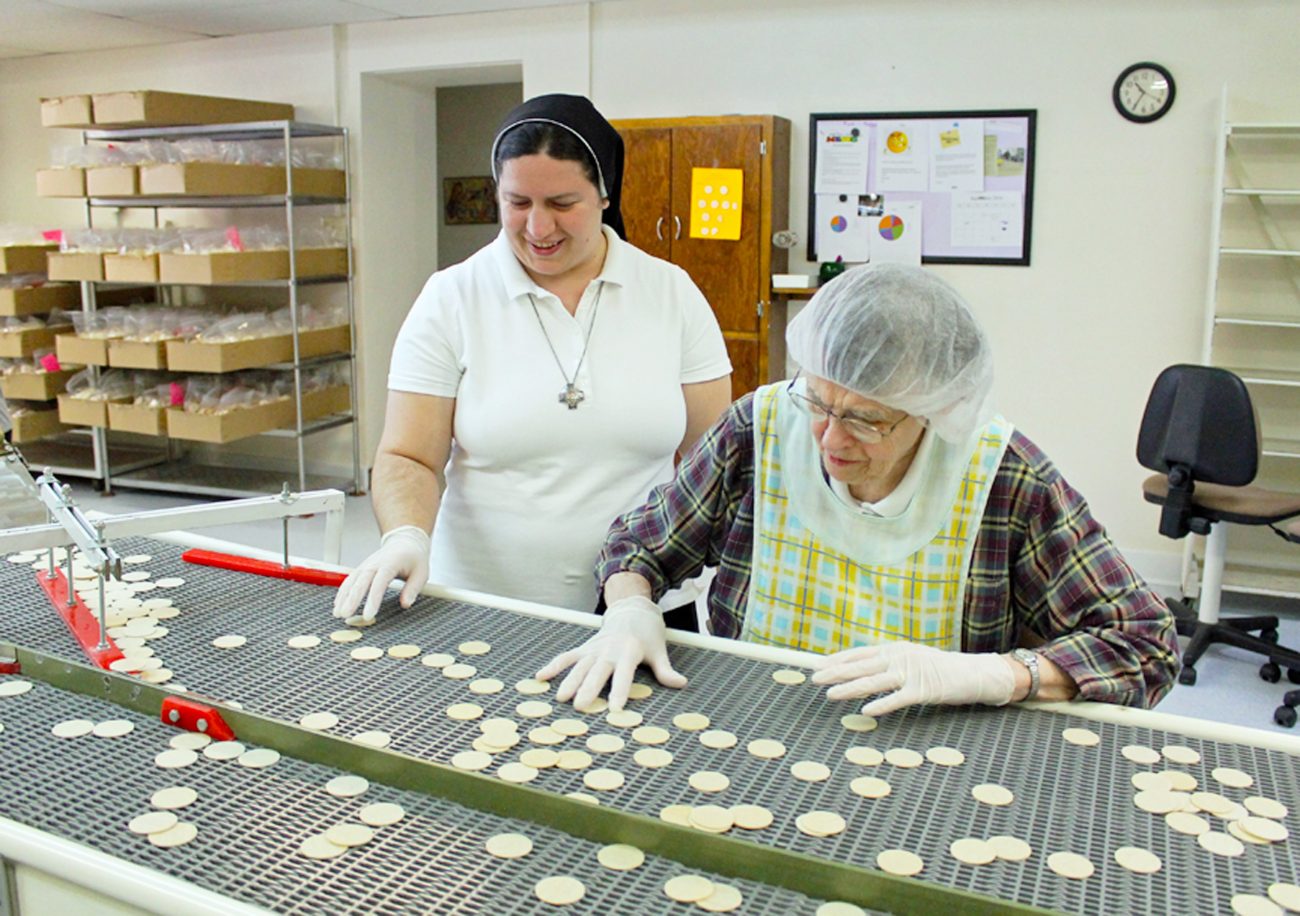 Sisters Maria Victoria Cutaia and Laurentia Doyle, both Benedictine Sisters of Perpetual Adoration, check individual hosts at the quality control belt at the congregation's altar bread production facility in Clyde, Mo., in this 2016 photo. Every single one of the millions of hosts produced by the Benedictine sisters are personally checked for quality before being shipped to customers around the world. (CNS photo/courtesy Benedictine Sisters of Perpetual Adoration)

WASHINGTON (CNS) — With the global pandemic practically shutting everything down for months, the sacramental wine and altar bread business has suffered like other businesses in the country, with COVID-19 preventing most indoor public celebrations of the Mass.

Throughout the spring and early summer, Catholics were largely unable to attend Mass in person and receive the Communion host and consecrated wine. Now where Mass can be attended by a small congregation that must adhere to health and safety protocols including social distancing, mask wearing and hand sanitizing, Catholics still might not want to receive Communion.

“Nothing has kept this winery from fulfilling its mission the last century and a half, until now,” said Will Ouweleen, who is the vintner at the O-Neh-Da and Eagle Crest vineyards in Conesus, New York, in the state’s Finger Lakes region. Hemlock Lake is home to the vineyards, which also produce table wines.

“Things are not well. Easter this year was effectively canceled. You were encouraged to stay home and have a spiritual Communion,” he told Catholic News Service. “What that means for O-Neh-Da Vineyard and other vineyards is there is no demand for sacramental wine. We have made very few sales since mid-February.”

Ouweleen said that he, his wife, Lisa, and a neighbor were doing “the work of 1,000 monks.” 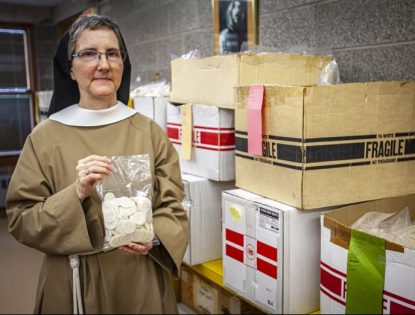 Sister Anne Bartol, a Poor Clare, holds a bag of altar bread she and other nuns prepared to sell to parishes throughout Pennsylvania at the Monastery of St. Clare in Langhorne, Pa., Aug. 13, 2020. The room is filled with boxes of backlogged altar breads and the monastery halted production this summer as the coronavirus pandemic reduced demand for the Eucharist at U.S. parishes. (CNS photo/Chaz Muth)

Although business has taken a hit, he explained, the vineyard has not laid off a single employee and it continued to pay part-time employees even though they haven’t been required to go to work.

The future looks unpredictable for the vineyard because what is unknown is how people will respond to drinking wine out of the Communion cup once public celebrations of Mass resume regularly.

The winery, which is in the Diocese of Rochester, New York, was founded to make sacramental wine by the first bishop of Rochester, Bishop Bernard McQuaid, in 1872.

It is one of the few remaining wineries in the world to make sacramental wine from locally grown grapes. More about its history can be found at www.purewineonline.com.

“We are facing an existential threat here like nothing the winery has seen,” Ouweleen said, adding that he doesn’t know what the future holds. There will be “a need for sacramental wine because priests must celebrate Mass,” but the faithful do not have to take the wine if offered at Communion, because “the body, blood, soul and divinity is present in the host completely.”

As Communion is being distributed in churches that are reopening in a limited capacity for Mass, right now it is the host, and not consecrated wine, that is offered, so O-Neh-Da has not seen its demand go back up. 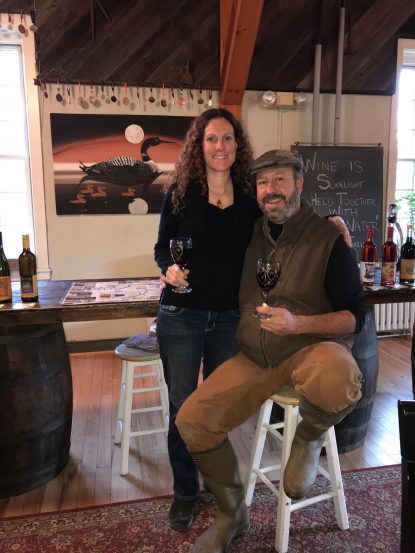 Will and Lisa Ouweleen pose for a photo at their O-Neh-Da Vineyard in Conesus, N.Y., in this 2017 photo. The vineyard, on the banks of Hemlock Lake, has a long tradition of making sacramental wine. (CNS photo/courtesy O-Neh-Da Vineyard)

“Since Christ is sacramentally present under each of the species, Communion under the species of bread alone makes it possible to receive all the fruit of eucharistic grace,” the catechism says. “For pastoral reasons this manner of receiving Communion has been legitimately established as the most common form in the Latin rite. But ‘the sign of Communion is more complete when given under both kinds, since in that form the sign of the eucharistic meal appears more clearly.'”

O-Neh-Da Vineyard sells directly to about 1,500 churches in New York state, Pennsylvania and Washington. It sells the rest of its wine through distributors.

About 95% of the churches the vineyard sells to are Catholic, but its customers also include Orthodox, Episcopal and Lutheran churches.

Normally, the vVineyard sells around 15,000 cases of wine in fall and spring. However, sales were few this spring because of the pandemic.

However, two orders of women religious who make altar bread and ship it out to churches around the country — the Benedictine Sisters of Perpetual Adoration in Clyde, Missouri, and the Poor Clares of the Franciscan Monastery of St. Clare in Langhorne, Pennsylvania — have seen a small increase in sales since churches have slowly reopened. But they still have a huge surplus of altar breads.

“Parishes started opening up again, so we saw a bit of an increase in sales beginning with the first part of June and gradually increasing as more parishes have opened up again,” she told CNS.

Sister Ruth explained that sales are not back to normal because the COVID-19 shutdown meant there would be no Easter Mass and that was rough on the Benedictine sisters.

Easter is one of the main times the nuns sell their altar bread, so they saw their sales decrease dramatically. As of now, “the presider’s bread” — the altar bread for the celebrant of the Mass — is selling much better than the bread used for Communion hosts for the laity. 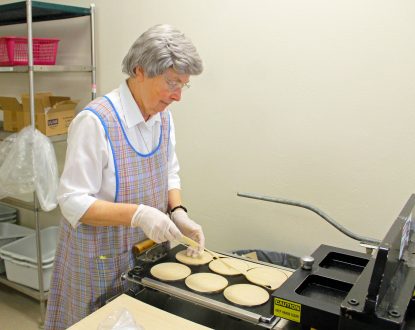 Sister Joy Ann Wege, a Benedictine Sister of Perpetual Adoration, cuts sheets of altar breads into individual presider hosts in her order’s kitchen in Clyde, Mo., in this 2016 photo. The sisters sell their altar breads to churches all over the world to help support their monastic life. (CNS photo/courtesy Benedictine Sisters of Perpetual Adoration)

“The presider’s bread is still selling. But (sales of) the people’s hosts with parishes shut down have fallen way down. Our sales were below 5% through April and May. Interestingly enough we make low-gluten hosts for celiac sufferers, but those sales were steady and currently (in mid-July) were probably at about 40% of sales for our low-gluten bread,” she said.

Along with the Benedictine Sisters, the Poor Clares have seen a gradual increase in sales as well. Sister Anne Bartol said the Poor Clares were getting about three orders per week, a dramatic decrease from their usual 40 or 50 orders a week, but at least they were getting something.

“Around mid-March perhaps, we started getting a big drop off in orders,” Sister Anne said. “We have two different types of clients: ones who call and the people that have our standing order. We kept sending our standing orders and within a month and two to three weeks of that they started calling in saying cancel my order. Basically, we’ve been at a standstill since late Match.”

The Poor Clares usually send out multiple orders of altar bread not only to Catholic churches but to a few Protestant accounts as well.

“In terms of total individual hosts, it’s about 750,000 a month,” Sister Anne said about what the nuns normally sell when there isn’t a pandemic. “Thirty-two bags is 8,000 hosts. That’s for one account or one order,” she added. 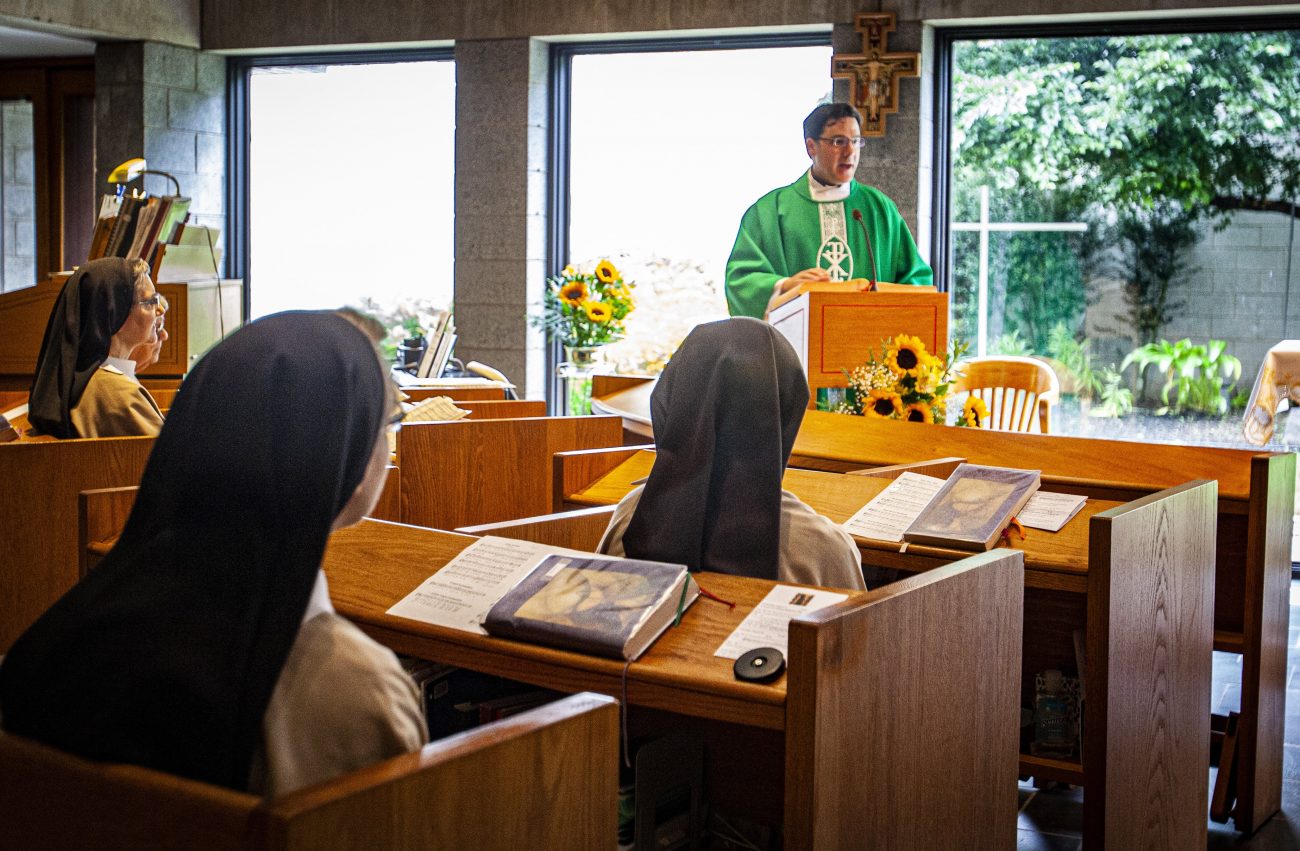 Father Marc F. Capizzi, a parochial vicar at St. Andrew Catholic Church in Newtown, Pa., celebrates morning Mass for the Poor Clare nuns at the Monastery of St. Clare in Langhorne, Pa., Aug. 13, 2020. The monastery produces up to 3 million altar breads a year, but halted production this summer as the coronavirus pandemic reduced demand for the Eucharist at U.S. parishes. (CNS photo/Chaz Muth)

NEXT: In new term, Supreme Court once again takes up religious liberty