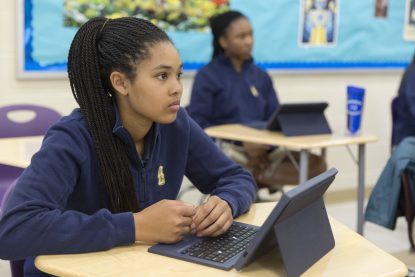 Students participate in a class at Our Lady of Good Counsel High School in Olney, Md., in this 2018 file photo. A Montgomery County, Md., health officer is defying an Aug. 3, 2020, ruling by Maryland Gov. Larry Hogan, which overturned that director’s order to keep Catholic and other nonpublic schools closed for in-person learning until at least Oct. 1. (CNS photo/Jaclyn Lippelmann, Catholic Standard)

The governor said at the time that “the blanket closure mandate imposed by Montgomery County was overly broad and inconsistent with the powers intended to be delegated to the county health officer.”

Gayles responded to the governor’s action by rescinding his previous directive and issuing a new one with the same stipulations, but this time citing two Maryland codes that he said gives him the authority to make such a decision.

In his Aug. 5 directive, Gayles pointed to the Maryland Code Annotated Health General regulation that stipulates “when a health officer is notified of an infectious or contagious disease within the county, the health officer shall act immediately to prevent the spread of the disease.”

He also noted the Code of Maryland Regulations, which say the health officer “shall take any action or measure necessary to prevent the spread of communicable disease or to control a reportable disease and condition; and issue, when necessary, special instructions for control of a disease or condition.”

In the new directive, Gayles explained the reason for his action, saying: “The available surveillance and epidemiological data demonstrate that there continues to be widespread community transmission of COVID-19 and increases in the daily caseload volumes within Montgomery County, the state of Maryland as a whole, and the surrounding jurisdictions.”

The Aug. 5 directive went on to say that “schools within Montgomery County, Maryland have been notified that due to the widespread community transmission, it is not safe to reopen schools for in-person instruction.”

Unlike the previous directive, this Aug. 5 directive does not include possible penalties for failure to comply. The original directive stipulated that violations could be punishable by up to one year in jail, a $5,000 fine or both.

The Archdiocese of Washington and its Catholic Schools Office are looking at the new directive and will determine how to respond.

In an Aug. 5 email to Montgomery County pastors and principals, Kelly Branaman, the archdiocesan interim superintendent for Catholic schools, said: “We are working at the archdiocesan level to evaluate the new order established this evening by Dr. Gayles.”

The archdiocese also said it continues to stand by its Aug. 1 statement when the original directive was issued.

At that time, Washington Archbishop Wilton D. Gregory said: “The Archdiocese of Washington continues to have the health and well-being of our students, faculty and parents uppermost in mind and heart as we make our decisions regarding the reopening of our Catholic schools. We will continue to strive to be both good citizens as well as to be faithful to our religious principles, pastoral mission and our obligations to our families.”

In addition to the Archdiocese of Washington, the Maryland Catholic Conference criticized Gayles’ directive, calling on Catholics in Montgomery County to contact their county lawmakers to voice their opposition.

“There is deep concern with Montgomery County summarily announcing private, parochial schools are barred from opening even though they have met health and safety standards,” the Catholic conference said in its “action alert” to Montgomery County Catholics.

“If you are concerned about the county’s action,” the message said, “please urge your County Council member to oppose the order and support the safe reopening of Montgomery County’s private, parochial and independent schools.”

The conference stressed that “many of the county’s Catholic and nonpublic schools have developed detailed plans for a safe, full in-person reopening or hybrid (in-person/online) opening. These schools have carefully followed guidelines regarding health and safety, consulted with health experts, communicated with parents and developed detailed plans.”

Several families with children in Catholic schools in Potomac, Bethesda, Kensington and Silver Spring, Maryland, have filed a federal lawsuit seeking an injunction against Gayles’ directive. They have been joined in the suit by parents whose children attend the Torah School of Greater Washington in Silver Spring and the Charles E. Smith Jewish Day School in Rockville, Maryland.

The petition for the injunction was filed Aug. 3, the same day Hogan issued his emergency order, and says the private schools have instituted proper safety measures, and that the county health department never visited the schools to see what measures have been established.

“The county health officer made it clear that he was not familiar with the extraordinary retrofitting, revamping and rescheduling that religious and private schools have undertaken to reopen safely,” the lawsuit states.

The Archdiocese of Washington also has been working to ensure a safe reopening of Catholic schools this fall. A task force was created that spent most of the spring and summer formulating a plan for opening schools.