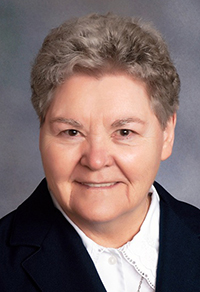 Sister Louise M. Goeller, I.H.M., died June 30 from complications of the COVID-19 virus in Paoli Hospital at age 88. She was in her 70th year of her religious life.

She was a native of Philadelphia and the daughter of the late Paul and Louise (O’Melia) Goeller. She attended both St. Athanasius and Holy Angels Elementary Schools and graduated from Little Flower High School in 1950.

She entered the Sisters, Servants of the Immaculate Heart of Mary in 1950 and received her habit and her religious name, Sister Maria Beata, in 1951. Sister Beata pronounced first vows on April 5, 1953.

While in the community she earned a bachelor’s degree in music and a master’s in counseling psychology.

She spent the next 11 years in Miraflores, Peru where she taught music until she returned to minister at Holy Trinity in Morrisville for two years. From 1970 to 1977, Sister Louise returned to South America to minister in Osorno, Chile and Santiago, Chile.

From that time to 1998 Sister Louise resided at Pacis Hall and served the sisters in Camilla Hall.

She then ministered in a variety of capacities including as liturgical music director at Our Lady of Fatima Parish, Bensalem; pastoral worker in Nuestra Senora del Rosario in Chile; pastoral minister at Immaculate Conception and St. Michael parishes, Philadelphia; and director of religious education at St. Ephrem Parish in Bensalem.

In August 2012 Sister Louise returned to Camilla Hall to continue her ministry of loving service and generous, faithful prayer until her death.

The funeral Mass was celebrated privately July 7, with Father William E. Dean as celebrant and homilist. Interment followed on July 17.

Sister Louise is predeceased by her parents, her sister Elizabeth Kaae and her brother-in-law William Ruane. She is survived by her sister Paula Ruane, many loving nieces, nephews, grandnieces and grandnephews, her local community from Camilla Hall and her congregation of I.H.M. sisters.