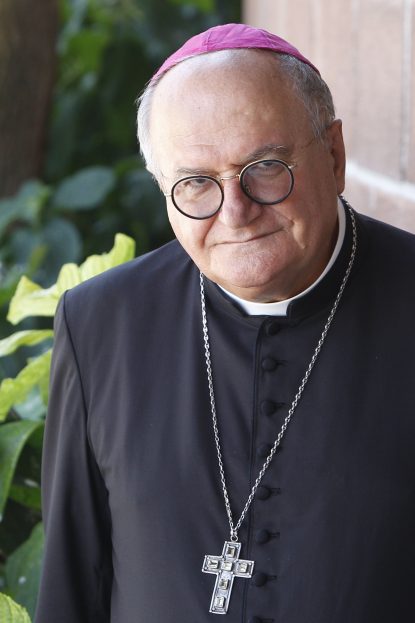 Bishop Romano Rossi of Civita Castellana speaks to a reporter July 31, 2020, outside a church in Anguillara Sabazia, Italy. The bishop said that though he has not yet set up a formal commission to evaluate the credibility of Marian apparitions to Gisella Cardia, he is following the alleged supernatural messages and evaluating both their content and spirit. (CNS photo/Robert Duncan)

VATICAN CITY (CNS) — The Catholic Church has always been very cautious when it comes to judging reported Marian apparitions.

More than 1,500 visions of Mary have been reported around the world, but in the past century fewer than a dozen cases have received church approval as being worthy of belief.

Determining the veracity of an apparition is an enormous job that falls to the local bishop.

The Vatican Congregation for the Doctrine of the Faith established a set of norms in 1978 to help bishops and guide them in the process of discernment and investigation of reported apparitions and revelations.

The process is never brief. For example, a series of Marian apparitions in the Diocese of Green Bay, Wisconsin, received approval in 2010 — 151 years after the first apparition was reported in 1859. But that’s just half of the nearly 300 years it took the church to approve the apparitions of Our Lady of Laus in France.

The process is lengthy because visionaries and witnesses must be questioned and the fruits of the apparitions, such as conversions, miracles and healings, must be examined.

According to the norms, the local bishop should set up a commission of experts, including theologians, canon lawyers, psychologists and doctors, to help him determine the facts, the mental, moral and spiritual integrity and seriousness of the visionary, and whether the message and testimony are free from theological and doctrinal error.

The longer the alleged apparitions last and the more popular an apparition site becomes, the more evidence accumulates — and the longer it takes the church to reach a judgment.

When the bishop’s investigation is complete, he can come to one of three conclusions: he can determine the apparition to be true and worthy of belief; he can say it is not true, which leaves open the possibility for an appeal; or he can say that at the moment he doesn’t know and needs more help.

In the last scenario, the investigation is taken to the national bishops’ conference. If the body of bishops cannot reach a conclusion, the matter is turned over to the pope, who delegates the doctrinal congregation to step in and either give advice, send a commissioner and-or set up a commission to investigate.

At every step of the investigation, however, the bishop remains in charge of the process.

An example of a situation in which the country’s bishops requested the Vatican’s doctrinal congregation to intervene is the alleged apparitions at Medjugorje in Bosnia-Herzegovina.

The congregation established an international commission in 2010 to investigate the claims of six young people who said Mary appeared to them daily beginning in 1981. The apparitions apparently are continuing, and hundreds of thousands of people travel to the small town each year.

The church’s approach has been to distinguish between an apparition, which may remain unproven, and the spiritual consequences among the faithful, which may be quite evident.

That means that in places where an apparition is still awaiting church approval, people can go to the site to pray and receive spiritual gifts, as long as they do not presume the apparition is authentic.

The church approaches each claim with the utmost prudence, with rigorous investigation and with the invitation to live out the Gospel rather than follow the apparitions.

In fact, the church never requires the faithful to believe in the Marian apparitions, not even those recognized by the church, because it teaches that public revelation ended with the New Testament, and that no private revelation will add anything essential to the faith.

The apparitions and messages are never the same, but, in general, Mary appeals for people’s conversion and seeks to assure men and women that they are not alone in the world and can depend on God’s loving mercy.

Her appearance is never meant to result in her glorification, but of God’s.

NEXT: When faith wobbles, cry out for God’s help, pope says