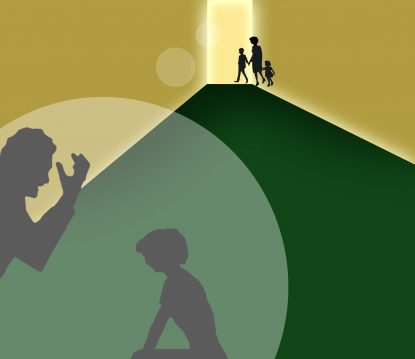 This illustration depicts domestic violence. The National Board of Catholic Women, which advises the Catholic Bishops’ Conference of England and Wales, has published a document about domestic abuse, which defines abuse and provides examples of abusive behavior. (CNS illustration/Emily Thompson)

MANCHESTER, England (CNS) — Responding to a pandemic-related surge in domestic abuse, including against gay and transgender people, the National Board of Catholic Women urged pastors and fellow Catholics to learn the signs of abuse and how to help victims.

The booklet, which defines abuse and provides examples of abusive behavior, pointed out that domestic abuse also occurs in same-sex relationships and is experienced by transgender people as well.

“Whilst recognizing the teaching of the Catholic Church on same-sex relationships, there will be parishioners who identify as LGBTQ+,” the booklet said. “As a matter of pastoral compassion, it is important that our priests and parishioners are aware of domestic abuse issues within these relationships.”

Trans persons suffer domestic abuse when their “sense of gender or sexual identity” is undermined by spouses or family members, said the booklet.

The board, a consultative body to the Bishops’ Conference of England and Wales, also defined as abusive withholding hormones and surgery “needed to express victim’s gender identity.”

The booklet, “Raising Awareness of Domestic Abuse,” was published in mid-August on the website of the bishops’ conference and will be distributed to parishes throughout England and Wales. A report about the document and a link to it were featured on Vatican News.

Margaret Clark, president of the National Board of Catholic Women, told Catholic News Service in an Aug. 19 telephone interview that the document replaced an outdated resource published a decade ago and was necessary because of a reported surge in domestic violence during the coronavirus lockdown which, she said, had seen as many as one in four women abused in their homes.

Besides new sections on emotional, coercive and spiritual abuse — in which no physical violence takes place — the booklet includes sections on the abuse of men and of members of the LGBTQ community for the first time.

It asks parishes to publicize through their websites and notice boards contact information for groups specialized in helping abuse victims, including referring LGBT victims of domestic violence to groups such as Stonewall, the most influential campaigning gay rights group in the U.K.

When asked by CNS if a parent would be abusing a teenage child by denying them requested gender reassignment treatments, Clark replied: “Yes,” but added that it might depend on how competent the child is.

Clark also told CNS that biblical and theological references were purged during revisions of the booklet because “we don’t want it predominantly thrown in your face.”

In the foreword, Norbertine Abbot Hugh Allan, apostolic administrator of the Falkland Islands and a member of the bishops’ conference, welcomed the booklet as an “an excellent resource for all of us.”

Abbot Allan, the episcopal liaison to the women’s board, told CNS in an Aug. 20 email that the booklet “does not seek to be a catechetical document” but a “source of information to help clergy and parishioners who encounter domestic abuse in its many different forms.”

He said Catholics must nonetheless use the booklet “in unity with the faith and be guided by that same faith.”

“I know as a parish priest that I would find the booklet helpful,” he added. “I hope others do, too.”

The Catechism of the Catholic Church states: “Everyone, man and woman, should acknowledge and accept his sexual identity. Physical, moral and spiritual difference and complementarity are oriented toward the goods of marriage and the flourishing of family life.”

And while the catechism insists that all people be treated with “respect, compassion and sensitivity” and that all “unjust discrimination” should be avoided, it describes homosexual orientation as “objectively disordered.”

The booklet on domestic abuse has drawn criticism from some senior figures within the English and Welsh church.

They include Bishop Philip Egan of Portsmouth, who told CNS in an Aug. 20 telephone interview that he believed the booklet was “very well-intentioned and timely” but “ill-thought-through.”

“I was very disappointed,” the bishop said. “It never once referred to Jesus, to the Gospels or what Jesus teaches about the care of the vulnerable and Jesus’ advocacy of the poor and the marginalized.

“I am surprised and disappointed, too, that it signposts vulnerable people and victims to organizations which are fundamentally opposed to Christian anthropology, and I think specifically to the Catholic Church,” he said. “It doesn’t point people to equivalent Catholic organizations.”

The booklet, he said, “implicitly supports gender fluidity against the church’s own position” set out in such documents as the catechism and “Male and Female He Created Them,” a document on gender theory published in February 2019 by the Vatican Congregation for Education.

“We do and should reject any violence and discrimination against those struggling with their gender or sexual identity,” the bishop said. But to define abuse as withholding hormones and surgery was “surprising in a Catholic document,” he said, “because it’s implicitly against Catholic anthropology and the theology of the body.”

NEXT: German bishops say talks with Rome on parishes must include laity