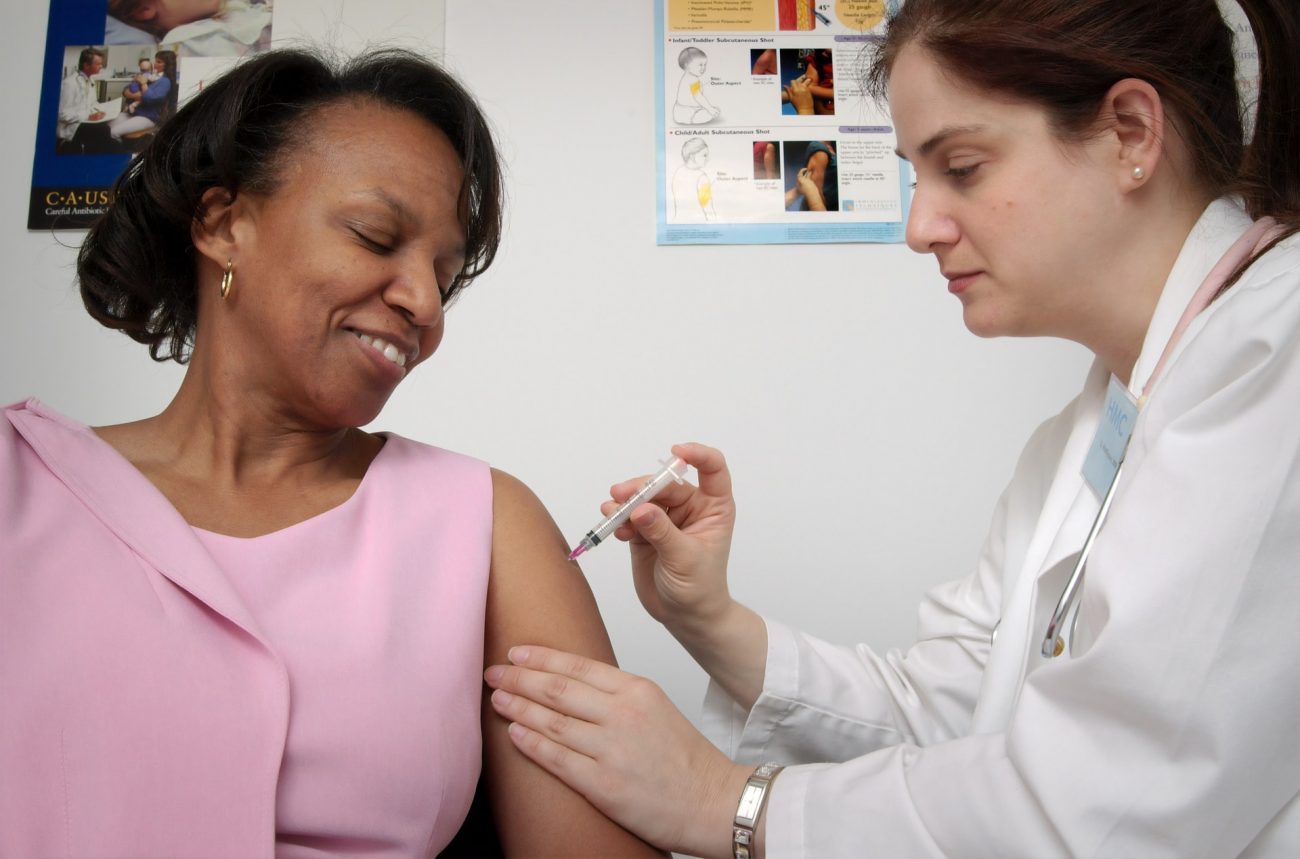 Catholics have a moral responsibility to avail themselves of a coronavirus vaccine once it becomes widely available, say local ethicists.

(Related: The science, and ethics, behind vaccines)

“Vaccines are important not only for their clinical value and the common good, but (they) also make good ethical sense,” said Steven Bozza, director of the archdiocesan Office for Life and Family.

With 33.4 million infections and more than one million deaths globally, COVID has created an unprecedented race for immunity, particularly as colder temperatures could intensify the spread of the virus. Some 43 vaccines are now in human clinical trials, with at least 93 others in animal testing.

Although experts disagree as to specific effectiveness rates, vaccination remains the “ideal approach” to protecting the overall population, according to the Mayo Clinic.

Yet misinformation and a lack of awareness about the ethics surrounding vaccines – from production to distribution – could hamper such immunization efforts.

That’s why Bozza and several area ethicists are urging Catholics to learn about church teaching on vaccines, and above all, “not to be afraid.”

“We can’t not avail ourselves of the medicines that are available to us because of fear,” said Bozza. “These vaccines are very, very important to us.”

For the common good

By preventing the spread of infection, vaccines work to further the common good, said Bozza. 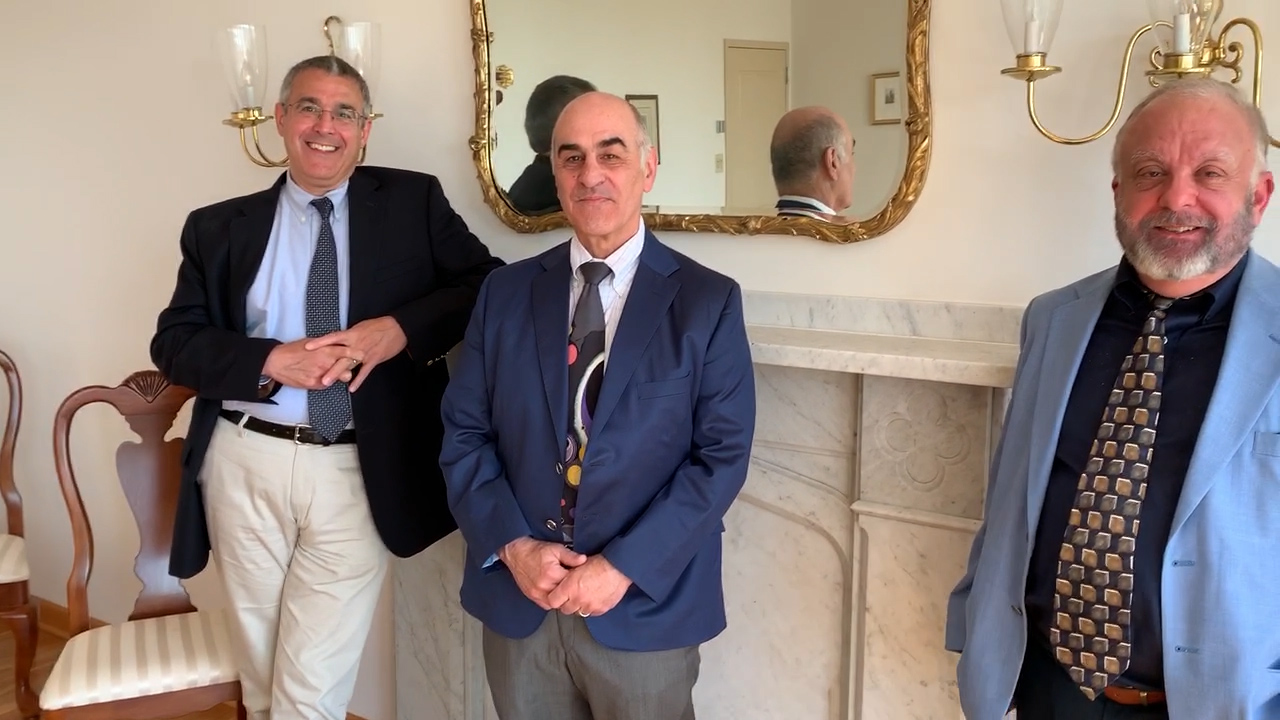 Dr. John Travaline of Temple University Hospital, Dr. William Williams of the Hospital of the University of Pennsylvania and Penn Presbyterian Medical Center, and ethicist Steven Bozza, director of the Archdiocese of Philadelphia’s Office for Life and Family, stressed that Catholics can — and should — avail themselves of a COVID-19 vaccine, once an ethically produced type is widely available. (Gina Christian)

Defined by the Catholic Church as “the sum total of social conditions” that allow people “to reach their fulfillment more fully and easily,” the common good – as understood in modern parlance – can be seen as opposing individual rights.

However, church teaching stresses that the good of all is based on “respect for the person as such,” as well as social well-being and peace (Catechism of the Catholic Church, 1905-1912).

With its aggressive attacks on the body’s respiratory system, and its widespread economic and political impact, COVID-19 has threatened all three, said experts.

“In my more than 30 years of clinical practice, it has been remarkable, and unprecedented in my view,” said Dr. John Travaline, director of the pulmonary procedure unit at Temple University Hospital, and professor of thoracic medicine and surgery at Temple’s School of Medicine.

Dr. Travaline said he has been particularly struck “by how quickly people infected with this virus became desperately ill, going from a relatively healthy state within a few hours to being very sick, requiring high amounts of oxygen and intensive care therapies.”

The “sheer number of people affected” by the virus, along with the “severe” toll it has taken on health care systems, have also been deeply concerning, he said.

A vaccine “would go a long way” towards easing such suffering, he added, noting that “vaccines have in some cases eradicated infectious diseases that have plagued humanity for centuries.”

Polio is a key example. Once a significant cause of paralysis and death among children, the disease has been largely eradicated throughout the world due to sustained vaccinations in more than 200 countries. In nations where vaccination workers frequently come under attack – Pakistan, Afghanistan and Nigeria – polio remains an active health threat.

The disease hit home for Dr. William Williams, an immunologist and rheumatologist at the Hospital of the University of Pennsylvania and Penn Presbyterian Medical Center. 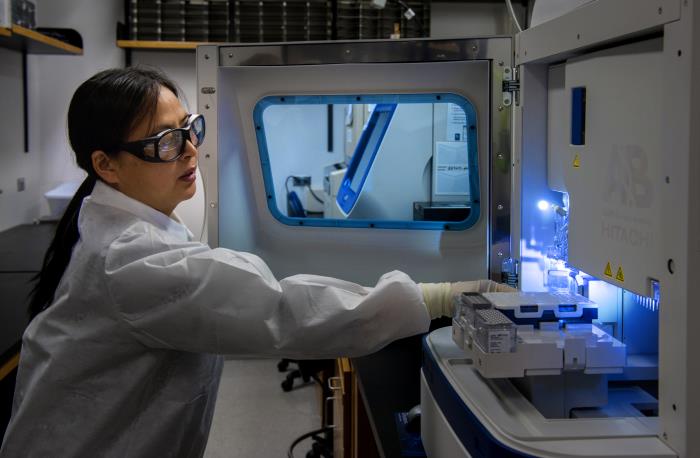 While still an infant, Dr. Williams lost his seven-year-old brother to polio just before the first vaccine (developed by Dr. Jonas Salk) was released in 1955.

“He initially had contracted it and recovered, but then he caught a cold and developed pneumonia,” recalled Dr. Williams. “He died from polio, and I never got to know my older brother.”

Following the 1988 launch of the Global Polio Eradication Initiative, an estimated 17 million have averted paralysis by polio, which has no known cure.

“It points out how important vaccines are in protecting many, many people from formerly fatal diseases,” said Dr. Williams. “And those diseases would still be fatal if we didn’t have immunity against them.”

At the same time, concerns regarding the production and distribution of a vaccine for COVID or any other disease are valid, said Bozza.

“We can’t use fetal cells to produce anything,” he said. “It’s solely immoral to say, ‘Well, I’m going to abort this particular child, and then we’ll use this child to provide good things for people’s health.’ That’s totally denying and negating the dignity of that child that’s aborted.”

In April, the U.S. bishops, along with several health care, bioethics and pro-life leaders, urged Dr. Stephen M. Hahn, commissioner of the U.S. Food and Drug Administration, to ensure COVID vaccines were “free from any connection to abortion.”

This month, global biotech firm Sanofi Pasteur announced that it would no longer use an aborted fetal cell line in manufacturing its polio vaccines.

“The Vatican has been very clear on this matter,” said Bozza, pointing to key documents from the Pontifical Academy for Life that in recent years have stressed “we have to avoid as much as we can the use of vaccines illegitimately produced.”

Two cell lines obtained from aborted fetuses, WI-38 and MRC-5, have been used to develop vaccines against rubella, chickenpox, hepatitis A, polio, smallpox and rabies.

In 2005, the Pontifical Academy affirmed that doctors and parents “have a duty to take recourse to alternative vaccines (if they exist), putting pressure on the political authorities and health systems so that other vaccines without moral problems become available.”

Where such alternative immunizations are unavailable and “considerable dangers” to health exist, parents and doctors can use morally problematic vaccines “on a temporary basis,” the letter advised.

A 2008 instruction from the Congregation for the Doctrine of the Faith (CDF), Dignitatis Personae, also addressed the “use of human ‘biological material’ of illicit origin” in vaccines, noting that “within this general picture there exist differing degrees of responsibility.”

For that reason, the CDF found that “in organizations where cell lines of illicit origin are being utilized, the responsibility of those who make the decision to use them is not the same as that of those who have no voice in such a decision.”

At the same time, said the CDF instruction, “danger to the health of children could permit parents to use a vaccine which was developed using cell lines of illicit origin, while keeping in mind that everyone has the duty to make known their disagreement and to ask that their healthcare system make other types of vaccines available.”

The Pontifical Academy for Life issued a more concise statement on vaccines in 2017, declaring that the WI-38 and MRC-5 cell lines currently used are “very distant from the original abortions and no longer imply that bond of moral cooperation indispensable for an ethically negative evaluation of their use.”

The academy said that “while the commitment to ensuring that every vaccine has no connection in its preparation to any material of originating from an abortion, the moral responsibility to vaccinate is reiterated in order to avoid serious health risks for children and the general population.”

In 2005, the academy addressed concerns over a purported link between childhood vaccinations and autism, declaring that “no correlation exists” between the two. 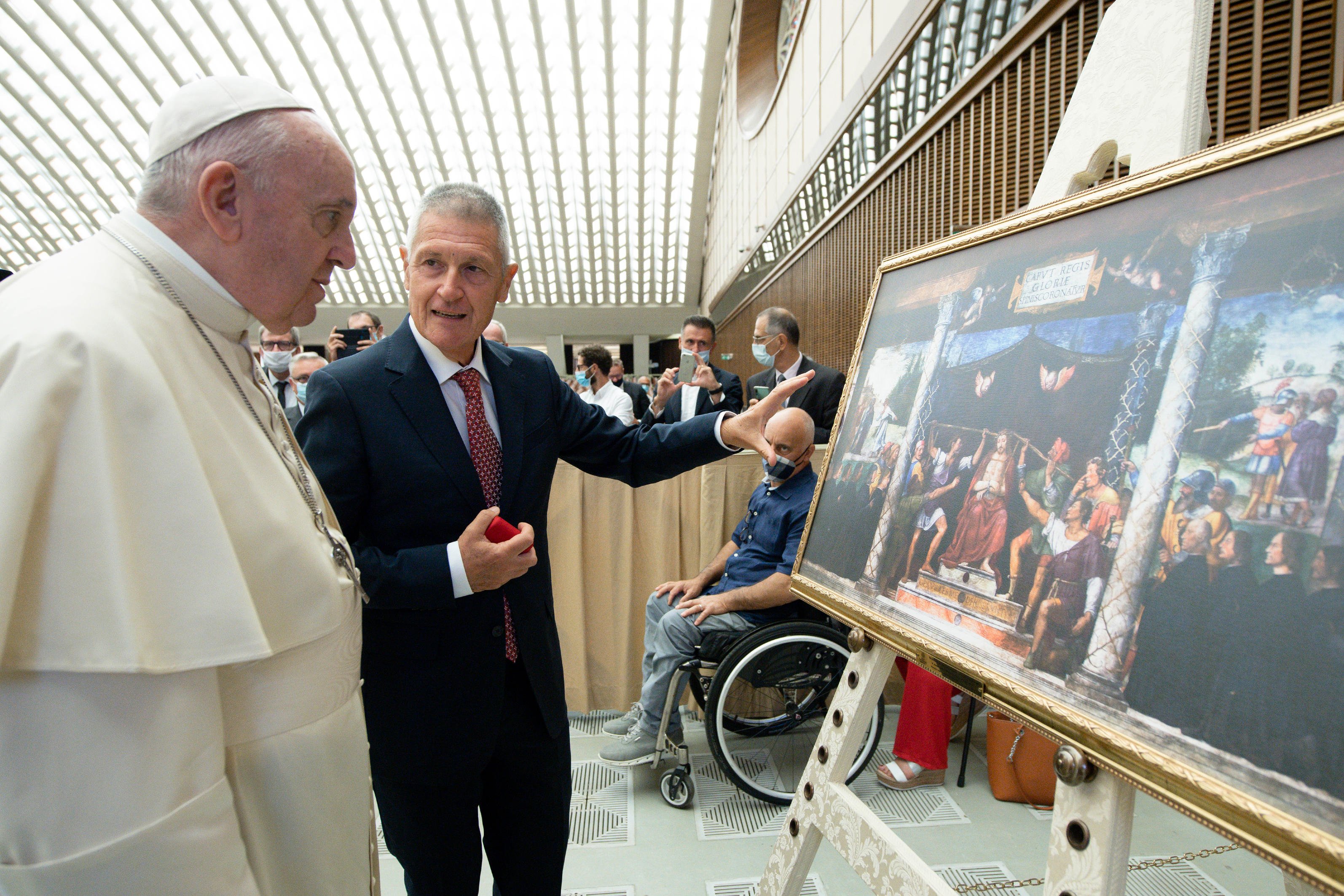 Sergio Daniotti, of the Italian Pharmaceutical Bank, a charitable organization that provides medicine to the poor, presents Pope Francis with a painting depicting Jesus being crowned with thorns during a Sept. 19, 2020, meeting with members of the organization in the Paul VI audience hall at the Vatican. The pope has called for universal distribution of a forthcoming COVID vaccine to alleviate “pharmaceutical poverty.” (CNS photo/Vatican Media)

Dr. Williams agreed, citing a 2019 study of more than 650,000 Danish children that “showed conclusively there is no link between autism and the MMR (measles, mumps, rubella) vaccine.”

Research has also discounted the risk of thimerosal, a vaccine preservative, he added.

Once a viable vaccine has been developed, the task of immunizing entire populations will pose a new set of ethical concerns.

“The issue of justice will play very highly in this,” said Bozza. “How do we handle this in terms of cost?”

On Sept. 19, Pope Francis reiterated his call for a universal distribution of the vaccine, saying that “it would be sad if, in providing the vaccine, priority was given to the wealthiest, or if this vaccine became the property of this or that country, and was no longer for everyone.”

Such “pharmaceutical poverty,” as the pope termed it, is being greatly offset by a development process that is “heavily subsidized,” said Bozza.

“There shouldn’t be any issue with the majority of people being able to afford this vaccine when it’s available,” he said.

For those who are uninsured, including undocumented migrants and refugees, “the government needs to find a way to provide this medication free of charge,” he added.

Persons with disabilities must also be ensured access to a COVID vaccination, said Dr. Williams.

“Recently, the problem has been with them being undervaccinated,” he said. “And that’s a question of social justice. They need to be vaccinated at a similar rate as everybody else.”

As with production, said Bozza, authorities and government entities have “a responsibility for making sure that vaccines of any sort are readily made available and accessible.”

With local and international ethicists closely monitoring the development of COVID vaccines, faithful can be confident in eventually receiving immunization, he said.

“By the time it’s all said and done, we’re going to have very, very good voices that will guide us in this,” said Bozza, citing in particular the Charlotte Lozier Institute and the National Catholic Bioethics Center.

“Please don’t be afraid to take the vaccine,” he added. “We’ll work through this together.”

The Congregation for the Doctrine of the Faith’s “Instruction ‘Dignitatis Personae’ on certain bioethical questions” (June 20, 2008) is also available online. Sections 34 and 35 of this document discuss “the use of human ‘biological material’ of illicit origin.”

PREVIOUS: The science, and ethics, behind vaccines