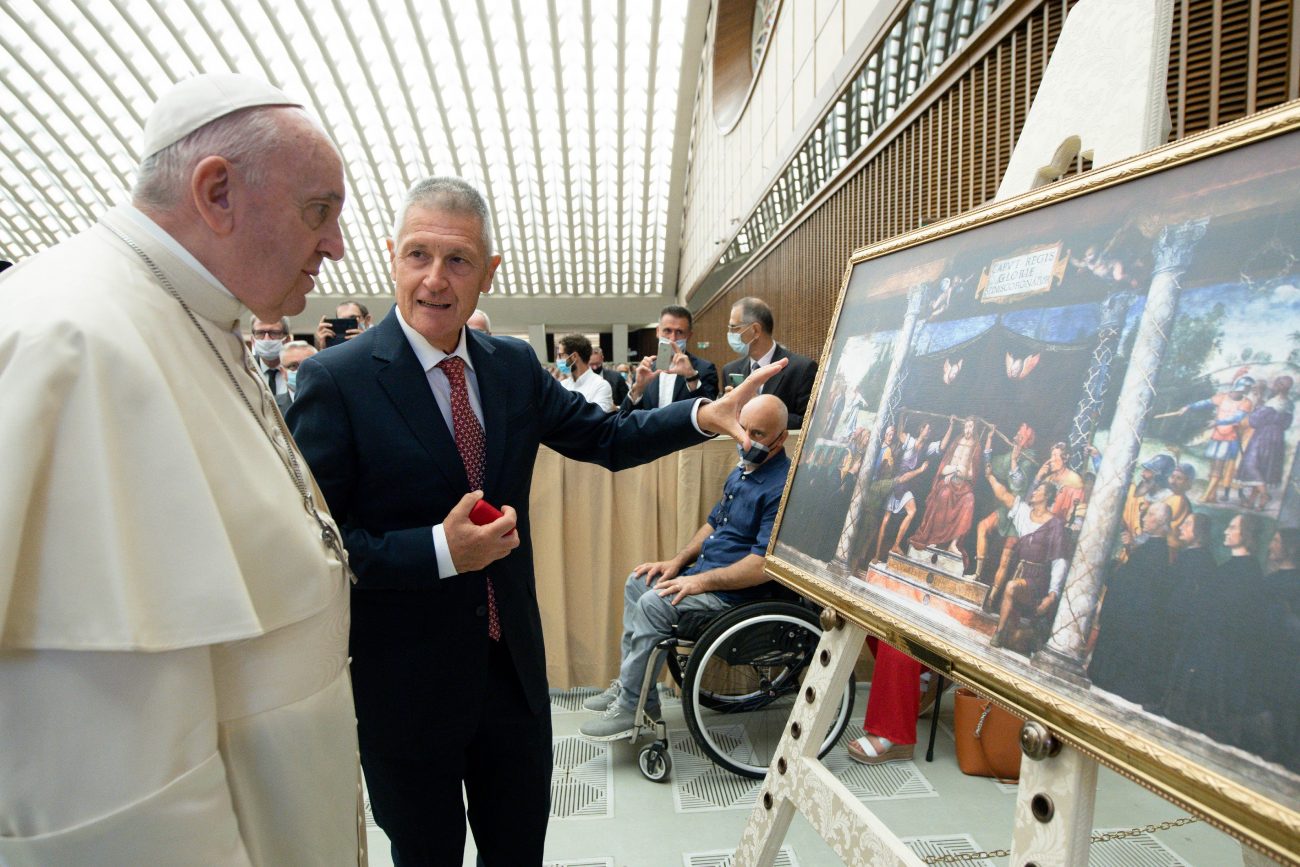 Sergio Daniotti, of the Italian Pharmaceutical Bank, a charitable organization that provides medicine to the poor, presents Pope Francis with a painting depicting Jesus being crowned with thorns during a Sept. 19, 2020, meeting with members of the organization in the Paul VI audience hall at the Vatican. (CNS photo/Vatican Media)

VATICAN CITY (CNS) — As countries around the world scramble to find a vaccine for COVID-19, Pope Francis again called for an ethical distribution of the vaccine to everyone, especially those who are struggling financially.

Addressing members of the Italian Pharmaceutical Bank, a charitable organization that provides medicine to the poor, the pope said that the economic crisis generated by the pandemic has shed a light on poverty in the world, including “pharmaceutical poverty.”

“I repeat that it would be sad if, in providing the vaccine, priority was given to the wealthiest, or if this vaccine became the property of this or that country, and was no longer for everyone. It must be universal, for all,” he said Sept. 19.

According to its website, the Pharmaceutical Bank was founded in 2000 by a group of young pharmacists who were convinced the lack of medicine for poor people was an “underestimated” problem.

Adopting a similar approach to food banks, the Pharmaceutical Bank opened locations throughout Italy to provide medicine to the poor. The organization also opened locations in Spain, Portugal and Argentina.

In his address, the pope reflected on the vulnerable health of those who live in poverty and are unable to obtain medicine or treatment not only due to lack of money, but also because of a “pharmaceutical marginality” that “creates a further gap between nations and between peoples.”

“Too many people, too many children are still dying in the world because they are denied access to a drug that is available in other regions, or to a vaccine,” he said. “We know the danger of the globalization of indifference.”

Pope Francis proposed “to globalize treatment” and said all people should be given access to life-saving medicine. He also called on pharmacists, pharmaceutical companies and governments to work toward the goal of a “more equitable distribution of medicines.”

“Through their legislative and financial choices, governments are also called upon to build a fairer world in which the poor are not abandoned or, worse still, discarded,” the pope said.