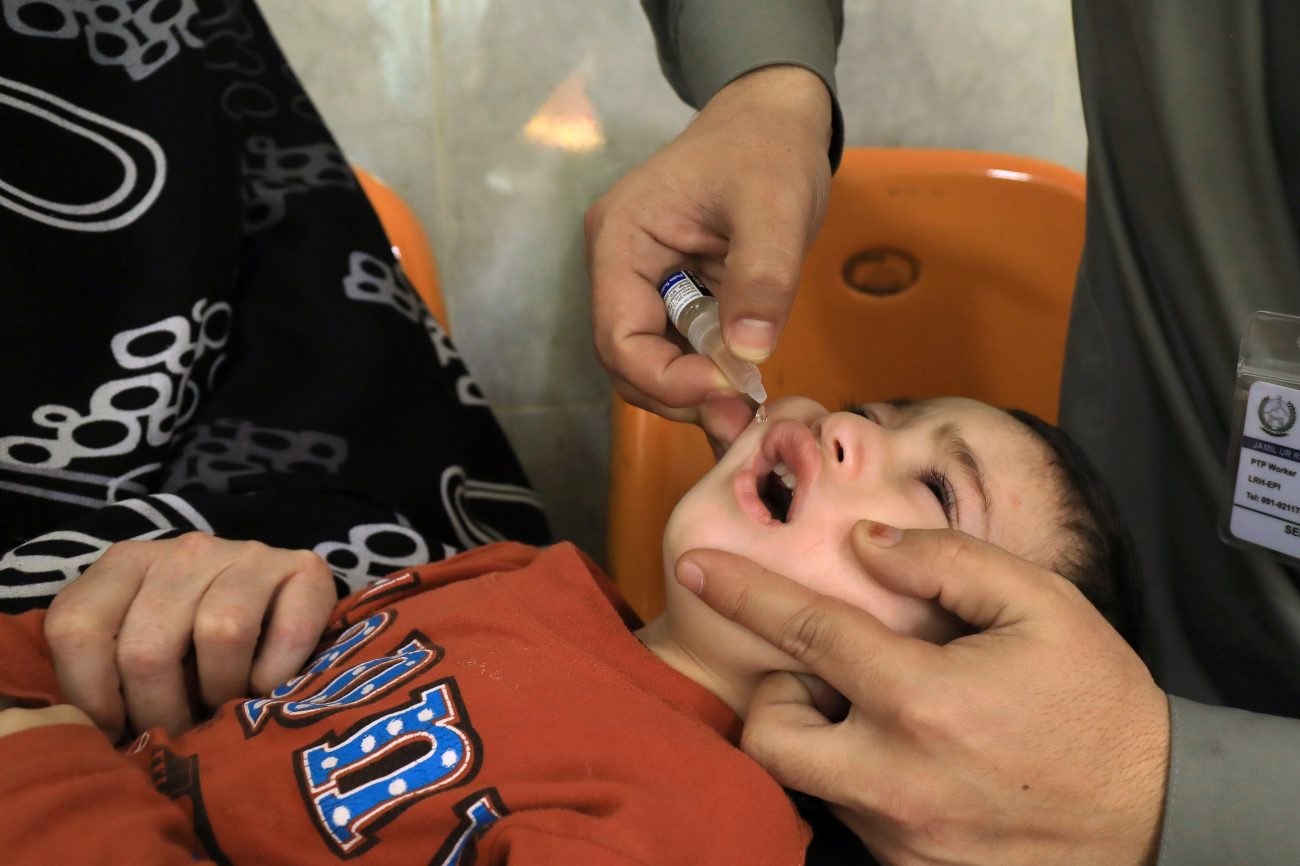 A boy in Peshawar, Pakistan, receives polio vaccine drops outside a hospital April 30, 2019. Sanofi Pasteur, the largest biotech company in the world devoted entirely to vaccines, recently sought and received approval from the U.S. Federal Drug Administration of its decision to ends use of aborted fetal cell lines for vaccines. (CNS photo/Fayaz Aziz, Reuters)

WASHINGTON (CNS) — Catholic pro-life leaders say they are seeing some progress in the development of vaccines with the use of ethical animal cell lines instead of cell lines derived from abortions.

A case in point is the decision by Sanofi Pasteur to no longer use an aborted fetal cell line in producing its polio vaccines, a move recently approved by the U.S. Food and Drug Administration (FDA).

The vaccines division of the French multinational pharmaceutical company Sanofi is one of the companies currently developing a COVID-19 vaccine by utilizing “cell lines not connected to unethical procedures and methods.” Inovio and the John Paul II Medical Research Institute are other such companies.

Joseph Meaney, in a recent statement posted on the centers’ website, congratulated the company for its recent initiatives. “The NCBC is pleased to see that progress is being made in this area.”

“It is my fervent prayer that no successful COVID-19 vaccine will emerge that was developed with the use of ethically tainted cell lines,” Meaney said. “If the nightmare scenario of the only available vaccine having a link to abortion comes about, it will cause major conscience problems for pro-lifers and Catholics.

“I am rather confident that we will be spared this additional ethical scourge from COVID-19, but the NCBC will certainly follow developments closely and use all the means at our disposal to spread needed ethical information on this issue.”

After the FDA approved Sanofi Pasteur’s decision to stop using MRC-5 in its development of vaccines, Greg Schleppenbach, associate director of the U.S. Conference of Catholic Bishops’ Secretariat of Pro-Life Activities, sent an alert to diocesan pro-life directors about the development and asking them to in turn send a message of thanks to Sanofi Pasteur.

“One important step we can take to ensure the production of ethical vaccines is to recognize and thank drug companies, like Sanofi Pasteur, when they move away from unethical vaccine production,” Schleppenbach said in his alert. “We can hope that, with some encouragement, other vaccine manufacturers may consider creating other morally acceptable vaccines.”

They asked their brother bishops to share this information with diocesan leaders and especially with Catholic health care leaders.

“As you may already know, the only vaccines readily available in the United States for some contagious diseases (e.g., rubella, chickenpox and Hepatitis A) have been manufactured using fetal tissue from induced abortions,” Schleppenbach said in his alert. “This creates a problem of conscience for some parents.”

He said the Pontifical Academy for Life recommended in 2005 — and reiterated in its 2017 “Note on Italian Vaccine Issue” — that “a long-term solution lies in working to ensure that future vaccines and other medicines are not based on cooperation with practices that demean human life.”

“The 2005 statement noted that physicians and parents ‘have a duty to take recourse to alternative vaccines (if they exist), putting pressure on the political authorities and health systems so that other vaccines without moral problems become available,'” Schleppenbach continued.

“This applies to products with a connection to abortion,” he said, “such as vaccines, as well as to projected therapies from destruction of human embryos for their stem cells.”

He thanked the pro-life directors “in advance for spreading this good news” about Sanofi Pasteur “and for sharing your own gratitude with the manufacturer.”

“We welcome these opportunities where we can illustrate the church’s eager embrace of scientific advancement when it upholds the dignity of the human person and the precious gift of human life,” he added.

In April, Archbishop Naumann, Bishop Rhoades and the chairmen of the USCCB’s domestic policy committee and its health care issues subcommittee were joined by the leaders of several health care, bioethics and pro-life organizations in “urgently and respectfully” imploring Dr. Stephen M. Hahn, the FDA commissioner, to ensure any vaccines developed for the coronavirus “are free from any connection to abortion.”

“To be clear, we strongly support efforts to develop an effective, safe, and widely available vaccine as quickly as possible,” the leaders said in an April 17 letter to Hahn.

“However, we also strongly urge our federal government to ensure that fundamental moral principles are followed in the development of such vaccines, most importantly, the principle that human life is sacred and should never be exploited,” they said.

“It is critically important that Americans have access to a vaccine that is produced ethically: No American should be forced to choose between being vaccinated against this potentially deadly virus and violating his or her conscience,” the group said.