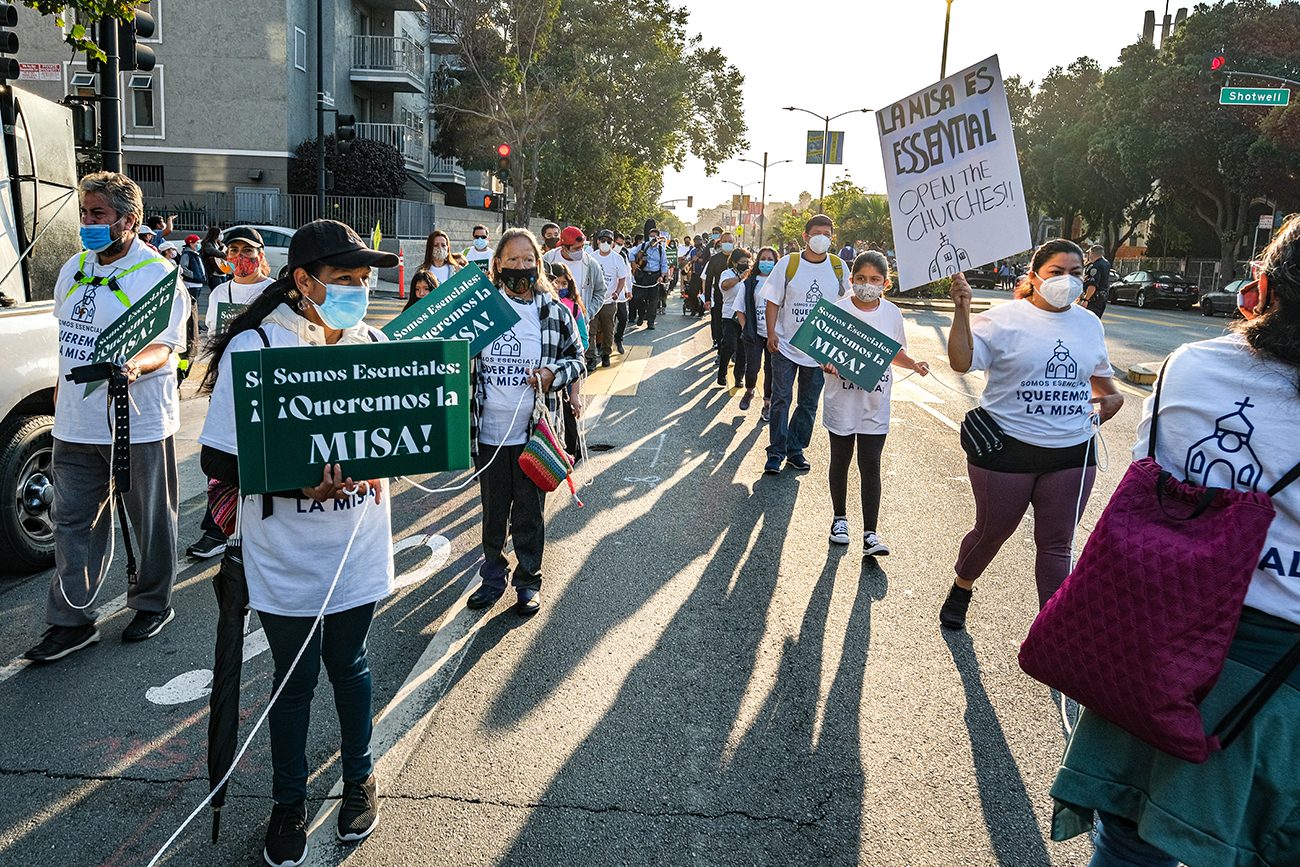 People in San Francisco march during a "Free the Mass" demonstration Sept. 20, 2020. San Francisco Archbishop Salvatore J. Cordileone's sermon at the Cathedral of St. Mary called out the city for discriminating against Catholics by imposing harsh restrictions on publish worship during the coronavirus pandemic. More than 1,000 people participated in the event and outdoor Masses. (CNS photo/Dennis Callahan, Archdiocese of San Francisco)

SAN FRANCISCO (CNS) — San Francisco’s archbishop told hundreds of Catholics gathered near City Hall Sept. 20 that “it is because of our Catholic faith that we are being put at the end of the line” by city officials in enacting what could be the country’s harshest pandemic restrictions on religious worship.

“The city continues to place unrealistic and suffocating restrictions on our natural and constitutional right to worship. This willful discrimination is affecting us all,” said Archbishop Salvatore J. Cordileone. “Yes, discrimination, because there is no other word for it.”

He made the comments in a homily at a Mass that followed eucharistic processions to a plaza near San Francisco’s City Hall.

On Sept. 13, in a memo to all priests of the archdiocese, Archbishop Cordileone announced that three parishes were organizing eucharistic processions starting at different points and ending up next to City Hall, to be followed by Masses outside the Cathedral of St. Mary of the Assumption. He urged all parishes to participate.

More than 1,000 Catholics participated in the archdiocesan “Free the Mass” demonstration.

In his memo, in an op-ed in The Washington Post Sept. 16 and in his homily, the archbishop said Catholics are asking to be treated like anyone else in being able to exercise their right to worship in public at a “level consistent with other activities” in the city, like shopping, protesting and gathering in a public park.

Church leaders have no issue with the faithful being asked to following safety protocols amid the pandemic, he said, and he has reiterated that being asked to adhere to these measures is within the purview of city and health officials, but keeping people from worship is not.

“Months ago, we submitted a safety plan to the city including masks and social distancing, just like indoor retail stores did,” explained in his homily. “The city said yes to indoor retail, but we Catholics are still waiting to hear back.”

Right now, he said, people can shop at Nordstrom’s at 25% capacity “but only one of you at a time is allowed to pray inside of this great cathedral, your cathedral? Is this equality? No, there is no reason for this new rule except a desire to put Catholics — to put you — at the back of the line.”

The archbishop made several references to the “back of the line” and “end of the line” in his homily, titled “Going to the End of the Line for the Glory of God.”

He said that Sunday’s Gospel reading from Matthew reminded him of the time he spent as pastor of Our Lady of Guadalupe Parish in Calexico, California, at the U.S.-Mexico border and his morning jog along the border fence.

“There I would see the exact scene Our Lord describes: men standing in the streets, waiting to be hired to work in fields so they could make a day’s wage,” he said. “Like the workers at the Eleventh Hour, these men were at the end of the line: the ones left out and ignored by society, the people barely able to survive.”

One time he gave a ride to the bus station to a man who had entered the country illegally and was trying to get to the next stop to start his new life in the United States. He bought the man a ticket so he could continue on his journey.

“I was aware that I was breaking the law, since it is against the law to provide transportation to an undocumented immigrant,” he continued. “But the highest law is love of God and love of neighbor, and that law has to take precedence over the human-made law of the state when government would ask us to turn our backs on God or our neighbor in need.

Archbishop Cordileone noted that amid the pandemic, the work of the Catholic Church of San Francisco has been ongoing, such as Catholic Charities’ outreach to the homeless or and the efforts of the Society of St. Vincent de Paul assisting the needy at the parish level.

He thanked the priests, religious and “the sacrificing lay faithful, for what you are doing to keep the love of Christ alive and visible in these distressing times. This is what it means to go to the end of the line.”

He urged Catholics to remain spiritually grounded during this time by spending at least one hour a week in adoration of the Blessed Sacrament and, fasting on Fridays and going to confession frequently.

NEXT: Santa Fe archdiocesan justice office urges no honor for Barr at breakfast