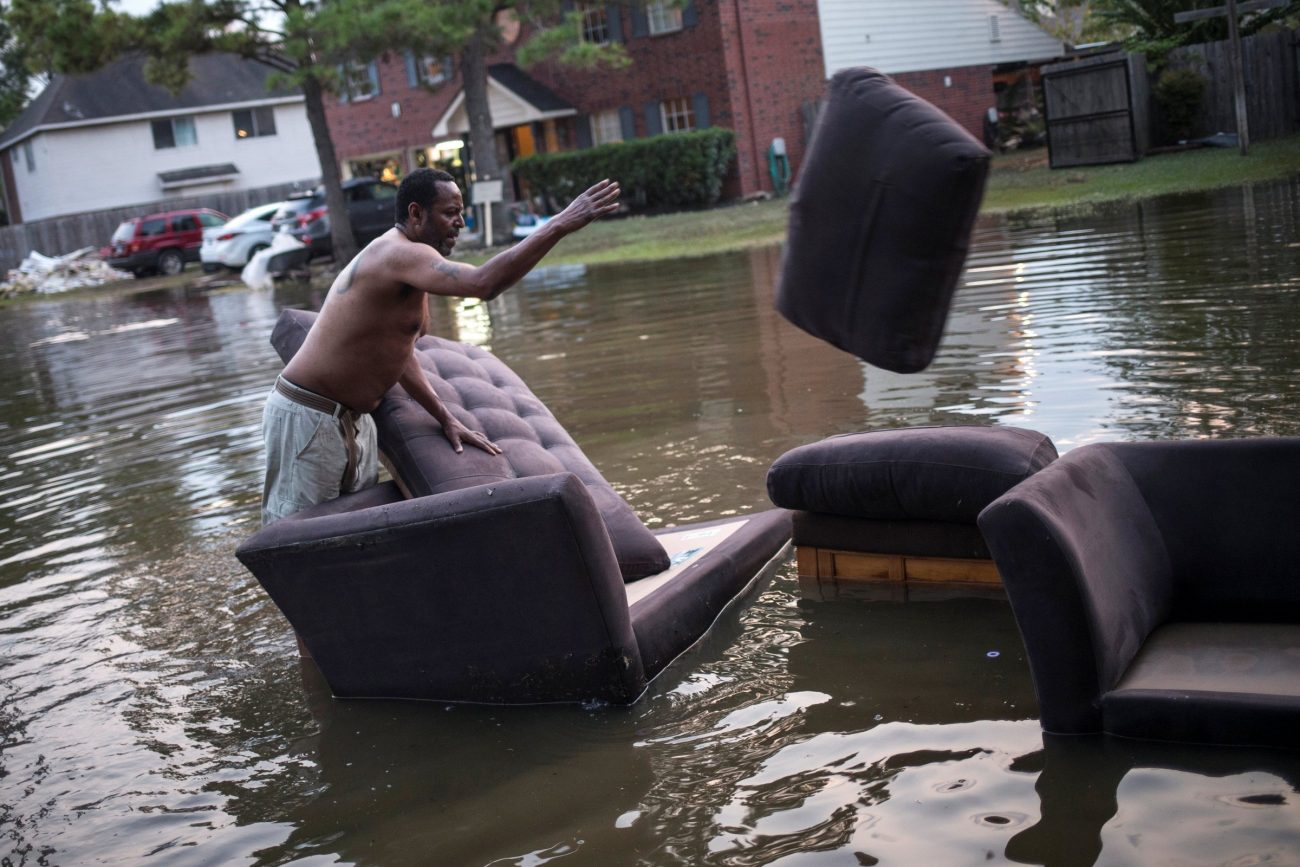 A man moves his flood-damaged sofas in Houston Sept. 3, 2017. Cardinal Daniel N. DiNardo of Galveston-Houston has approved formation of a Disaster Spiritual Care group. As of Sept. 14, 2020, 18 priests and 34 deacons have agreed to be assigned as needed to emergency shelters working in coordination with Red Cross and social services during hurricanes and other disasters. (CNS photo/Adrees Latif, Reuters)

HOUSTON (CNS) — When people see their homes destroyed by flood or other disaster that forces them into a shelter, they need someone to listen to them, said priests and deacons who serve on a newly formalized ministry recently approved by Cardinal Daniel N. DiNardo of Galveston-Houston.

The archdiocesan Disaster Spiritual Care ministry so far has 18 priests and 34 deacons who have agreed to be assigned as needed to emergency shelters working in coordination with Red Cross and social services during hurricanes and other disasters, said Father Lucien “Luke” Millette.

First put into action informally in the aftermath of Hurricane Harvey in August 2017, Father Millette said he asked permission then to temporarily take leave of his office as vicar of the tribunal, which deals with annulments among other legal matters, so he could help in the shelters.

That request was approved and other priests, depending on their duties at their parishes, also went to the George R. Brown Convention Center and other shelters to help the thousands who had been displaced.

“Established by the cardinal, this pastoral care group will respond to any type of large-scale disaster that cannot be handled by a single parish. In addition to the usual training received by all pastoral ministers, our group will also receive additional training from the American Red Cross and the International Critical Incident Stress Foundation,” Father Millette said.

“When assisting others in the community outside our own faith, this ministry is not to be used for proselytizing, but as a way to provide psychological first aid by actively listening to them in their time of need,” he said.

In establishing rapport and relationships with people in shelters, Father Millette said their role is not to make assumptions on what is needed, but instead focus on what is in the hearts of those to whom they are ministering.

“One man, who had been in a shelter for a month and a half, said his main concern was having access to ice and cold water. That made him feel human and normal. So each day on my way to the shelter, I would stop and get him a big cup of ice. Something that small can give people the strength to carry on,” the priest told the Texas Catholic Herald, the archdiocesan newspaper.

This ministry continued to develop after Hurricane Harvey when local clergy responded to the Santa Fe High School shooting in May 2018, going to hospitals and memorials to be there for families.

Then the group of priests and deacons also came together to attend a memorial at Yates High School on behalf of former student and Houstonian George Floyd, who died while in the custody of police in Minneapolis May 25 of this year, said Father Italo Dell’Oro, archdiocesan director of Clergy Formation and Chaplaincy Services.

“We attended the memorial at the invitation of the Red Cross to provide a pastoral presence at the memorial. The event was respectful and peaceful after coming on the heels of protests,” he said.

The recent close call with Hurricane Laura that narrowly missed Houston this August, instead plowing into the Texas-Louisiana border, came after the archdiocese formalized the Disaster Spiritual Care ministry, he said. Now in addition to the cardinal’s approval, the ministry has its own email group address to more quickly communicate and coordinate with each other.

Deacon Phillip Jackson, director of the archdiocese’s diaconate formation program, said deacons also were called upon to be part of the Disaster Spiritual Care ministry.

“It is a part of our charitable service to help those in need. We do not want to infringe upon the duties of the Red Cross, but we are there to be a presence where we are dispatched in the shelters,” Deacon Jackson said.

Having this ministry in place will allow more efficient assignments by coordinating which deacons and priests are available to travel to shelters despite any particular streets flooding, he said.

“Many of the questions that those in shelters have, we may not be able to directly answer. They always want to know when they can go home or how can they have access to their medication. We can find out answers to those questions for them, but our main role is to listen and provide pastoral care,” said Deacon Jackson.

Zuñiga writes for the Texas Catholic Herald, the newspaper of the Archdiocese of Galveston-Houston.

NEXT: Catholic Health Association weighs in on COVID-19 vaccine