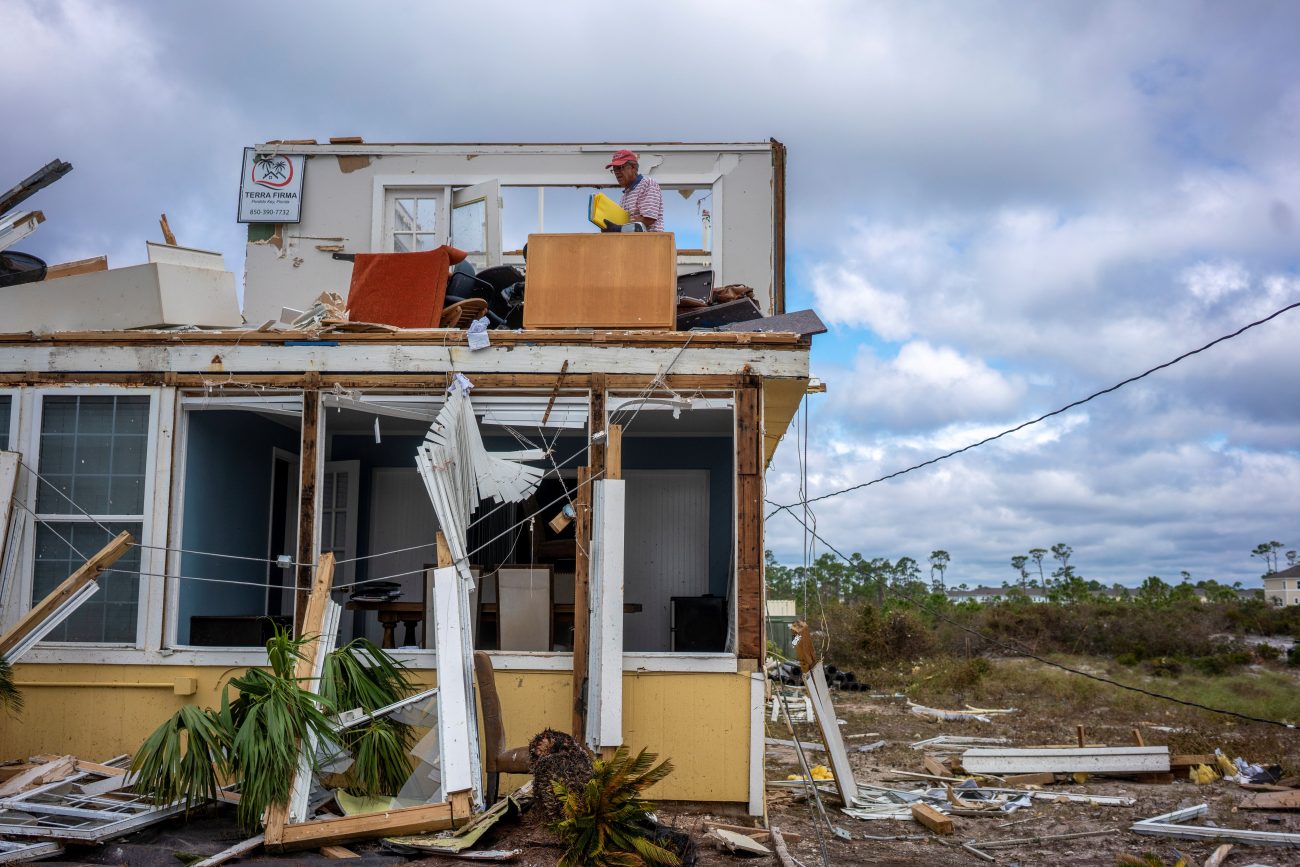 A man in Period Key, Fla., tries to recover some items from his building Sept. 17, 2020, after Hurricane Sally swept through the area. (CNS photo/Kathleen Flynn, Reuters)

PENSACOLA, Fla. (CNS) — As Tropical Storm Beta made landfall between Corpus Christi and Galveston, Texas, along the Gulf Coast the night of Sept. 21, the Diocese of Pensacola-Tallahassee prepared to dispatch its “Caring Coach” to help those still recovering there from Hurricane Sally’s wrath unleashed on the Gulf Coast a week earlier.

Sally made landfall early in the morning Sept. 16 near Orange Beach, Alabama, packing maximum sustained winds of 105 mph. As many news reports noted, it was the first hurricane to make landfall in Alabama since 2004’s Ivan, which occurred 16 years earlier to the day.

At one point, over 500,000 residents were left without power as severe winds brought down power lines in parts of Florida and Alabama. Insurance companies have put the costs of damage in the Gulf Coast region at between $1 billion and $3 billion.

“Our hearts and prayers go out to all that have been impacted by Hurricane Sally,” says a message on the website of the Diocese of Pensacola-Tallahassee, https://ptdiocese.org/hurricanesally.

“God is our refuge and our strength, an ever-present help in distress,” the diocese tweeted early Sept. 22.”Thus we do not fear, though earth be shaken and mountains quake to the depths of the sea, Though its waters rage and foam and mountains totter at its surging (Psalm 46:2-4). Thank you for continuing to join us in prayer for those affected by Hurricane Sally.”

The same day, Catholic Charities of Northwest Florida in the diocese was dispatching its Caring Coach, one of the agency’s many outreach services, to distribute food in Miramar Beach, Florida, one of the communities still coping with Sally’s aftermath.

The diocesan website also includes a detailed posting on what churches and schools sustained damage in the hurricane, with regular updates.

Pensacola’s Basilica of St. Michael the Archangel had little damage to the church itself, though outside a wall between it and the Regions Bank branch — which had a historic sign on it — are gone, along with security cameras on the back of the parish house.

However, there was “something interesting” about the damage, the posting said, “The very old statue of Our Lady of Lourdes that is under the back kitchen window was blown over on the concrete patio and did not break.”

In an email to Catholic News Service Sept. 22, Terry Dickson, director of communications for the Diocese of Biloxi, Mississippi, and editor of the Gulf Pine Catholic diocesan newspaper, said that “apart from some wind, rain and flooding in low-lying areas, we were pretty much unscathed by Hurricane Sally.”

As Texans along the Gulf of Mexico and others faced flash flooding brought by slow-moving Beta, heading in a northeasterly direction, the Diocese of Victoria, Texas, a suffragan diocese of Galveston-Houston, continues to help people recover from yet another storm — Hurricane Harvey, which hit three years ago this August.

It put many people in temporary housing and some are still not back home, reported The Catholic Lighthouse, Victoria’s diocesan newspaper, in a recent story.

The COVID-19 crisis has sent some traveling volunteer groups in the diocese back home to hunker down with their families until they feel safe returning. That means even longer waits for many families to get into safe, permanent housing, according to Ashley Hernandez-Razo, the Disaster Services Manager for the Diocese of Victoria.

Razo said the diocese, with grant funding earmarked for Hurricane Harvey recovery, is one of few entities still funding unmet needs. The office has been working with the Long Term Recovery Groups in Calhoun, Victoria and Wharton counties.

“It’s been amazing assisting families within our community in their recovery from Hurricane Harvey. To be a part of their journey, from not knowing how or where to start their recovery to having their home and family life restored, and seeing their relief and gratitude is a feeling that I cannot put into words,” Razo said.

So far, the diocese has provided $2.7 million in assistance to 663 households, Razo told The Catholic Lighthouse. Funds have been spent on interior and exterior repairs, appliances, plumbing, utilities and temporary housing.

A large amount has been on the “House in a Box” program. A signature program of the Society of St. Vincent de Paul, it provides homeowners the basic household furnishings following a disaster.

Razo said the Long-Term Recovery Groups reported in January of this year it was still getting 40 to 50 calls a month for assistance. She said most were applying so late because they simply did not know there was additional help available.

Contributing to this story was Janet Jones, editor of The Catholic Lighthouse, newspaper of the Diocese of Victoria.

NEXT: Archbishop says God is calling immigrant church to be ‘light’ to nation of immigrants