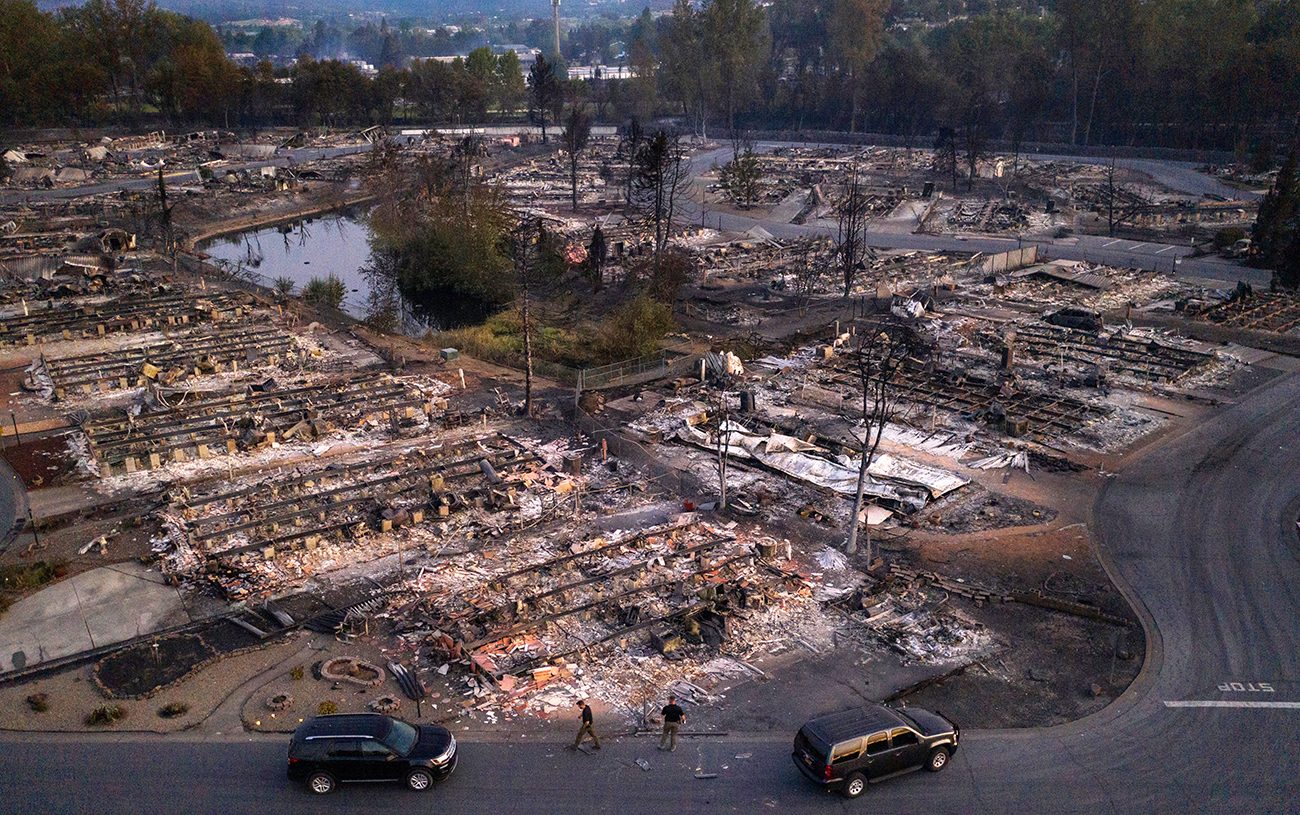 A neighborhood in Phoenix, Ore., is seen Sept. 9, 2020, after the Almeda fire swept through the area. (CNS photo/Adrees Latif, Reuters)

PORTLAND, Ore. (CNS) — While the foothills of Oregon’s Cascade Mountains have been ablaze, creating red apocalyptic skies and leaving five small towns in ashes, most of the churches in the Archdiocese of Portland have not burned and many have offered shelter to thousands of evacuees.

On Sept. 9, two deaths in Marion County and one in Jackson County were reported, but Oregon Gov. Kate Brown said she feared that many more lives were lost.

Ann Brophy, pastoral associate at Sacred Heart Church in Medford, stood on her front porch the night of Sept. 8 and watched the small towns of Phoenix and Talent incinerate just a few miles south.

“It was terrifying,” said Brophy, who lives in an area where residents are to be ready to leave at a moment’s notice.

One Sacred Heart parishioner in Phoenix lost her mobile home to flames not long after gathering up photographs of her husband, who died two years ago. Brophy said she expects that many more parishioners will report being suddenly homeless.

Sacred Heart and other nearby parishes offered refuge for evacuees, filling their parish gyms and parking lots.

Father Bill Holtzinger, vicar of the southern Oregon region, has been in touch with local priests and said they were all fine as of Sept. 8 and no church properties had been damaged or immediately threatened.

“That, of course, can change in moments,” Father Holtzinger said. “It’s a tense time.

The tragedies in Talent and Phoenix could repeat themselves as small fires pop up and turn into big fires,” he told the Catholic Sentinel, archdiocesan newspaper of Portland.

On Sept. 9, a new fire was approaching rural Shady Cove in southern Oregon, home to Our Lady of Fatima Church. The archdiocese reported the parish had been evacuated.

One of Oregon’s most devastated areas is the Santiam Canyon, east of the capital Salem. The small mountain lake town of Detroit, where a Catholic mission closed several years ago, was destroyed.

As of the afternoon of Sept. 9, a fire was close to St. Catherine Mission in Mill City but had not touched it. The community had been ordered to evacuate the morning of Sept. 8, as was nearby Lyons, home to St. Patrick Mission. The Santiam and Lionshead fires have burned some 200,000 acres.

“Hopefully, those churches in Mill City and Lyons will survive,” said Father Luan Nguyen, pastor of those churches. “At the time being, we don’t know when Mass will be celebrated again.”

The nearby church in Jordan, Our Lady of Lourdes, also now sits empty. The Eucharist was moved to Immaculate Conception Church in nearby Stayton Sept 8.

Benedictine Father Philip Waibel planned Sept. 8 to stop by Holy Rosary Chapel in rural Crooked Finger, a mission where he serves as pastor but the area surrounding the church was evacuated by noon that day and now it is essentially closed.

Smoke and ash from the nearby fires crept into Father Waibel’s main parish, St. Mary in Mount Angel. The community there, including the Benedictine abbey and seminary, is on a level 2 evacuation notice, meaning residents should be ready to evacuate if needed.

Mount Angel has not been touched by the fire, but Father Waibel described the eerie scene outside Sept. 9 as a foggy twilight with ash falling from the sky.

By early afternoon Sept. 9, half of Clackamas County, just southeast of Portland, was under a level 3 “must evacuate” order. At least five fires had burned a combined 42,500 acres, with the largest, the Riverside Fire, moving 17 miles in one day.

Estacada, like many towns in the county, is now in a level 3 zone.

Earlier in the day, Tammy Pagano, pastoral associate at St. Michael the Archangel Parish in Sandy, had been concerned about Estacada, then at level 2, because her mother lives there.

“Person to person, we’re dealing with it,” Pagano said, adding that the fire seems to be just the latest catastrophe. “It just keeps piling on.”

But she also found reasons to be grateful amid the smoke. “It’s devastating but heartwarming to see people reach out to strangers, to help them get out,” she said.

Loretta Payne, a member of St. Philip Benizi Parish in Oregon City, lives in nearby Beavercreek and said it was so smoky around her home that she could not see her neighbor’s house. She has been faithfully praying a 52-day novena for the firefighters, rain and salvation of souls.

In Yamhill County, southwest of Portland, Deacon Jose Montoya was pondering how to evacuate the 21 Trappist brothers from Our Lady of Guadalupe Trappist Abbey near Lafayette — just in case.

“It’s eerie, this orange sky,” said Deacon Montoya, the physical plant manager for the abbey. “You have this fear of not knowing if the smoke will get too thick and if the fire will come here. You can’t do anything about it but pray.”

“It’s snowing ash at an amazingly high rate,” she said. “By the time you walk from the parish office to your car, you will have a collection of it on your shirt.”

At least 15 parish families on the outskirts of Springfield have had to evacuate; one St. Alice family has been living in their travel trailer on the church parking lot. Ries hasn’t yet heard of anyone losing a home.

In an email message to parishioners, Father Mark Bentz, pastor of St. Alice, encouraged those forced to evacuate to place an image of the Divine Mercy or the Blessed Mother on their door.

Pat Vondermehden, pastoral associate of St. Paul Parish in neighboring Eugene, said some parishioners have evacuated. “There are lots of prayers right now,” she said.

O’Hara and St. Paul schools in Eugene had planned to welcome small contingents of younger students for the first day of school Sept. 8. Due to the fires, they pushed back the in-person start date until at least Sept. 11.

“We are in the middle of a hotly contested election, we have social justice issues that need attention, there’s a pandemic that’s taking lives every day,” said Ragan. “Then to have this apocalyptic scene — people are feeling tired. But at the same time, it’s steeling people to see how much they are capable of and how important it is to work together.”

Contributing to this report was Ed Langlois, Kristen Hannum, Katie Scott and Sarah Wolf from the Catholic Sentinel, newspaper of the Archdiocese of Portland.

NEXT: Brooklyn bishop reflects on ‘attack that shook foundations of our society’