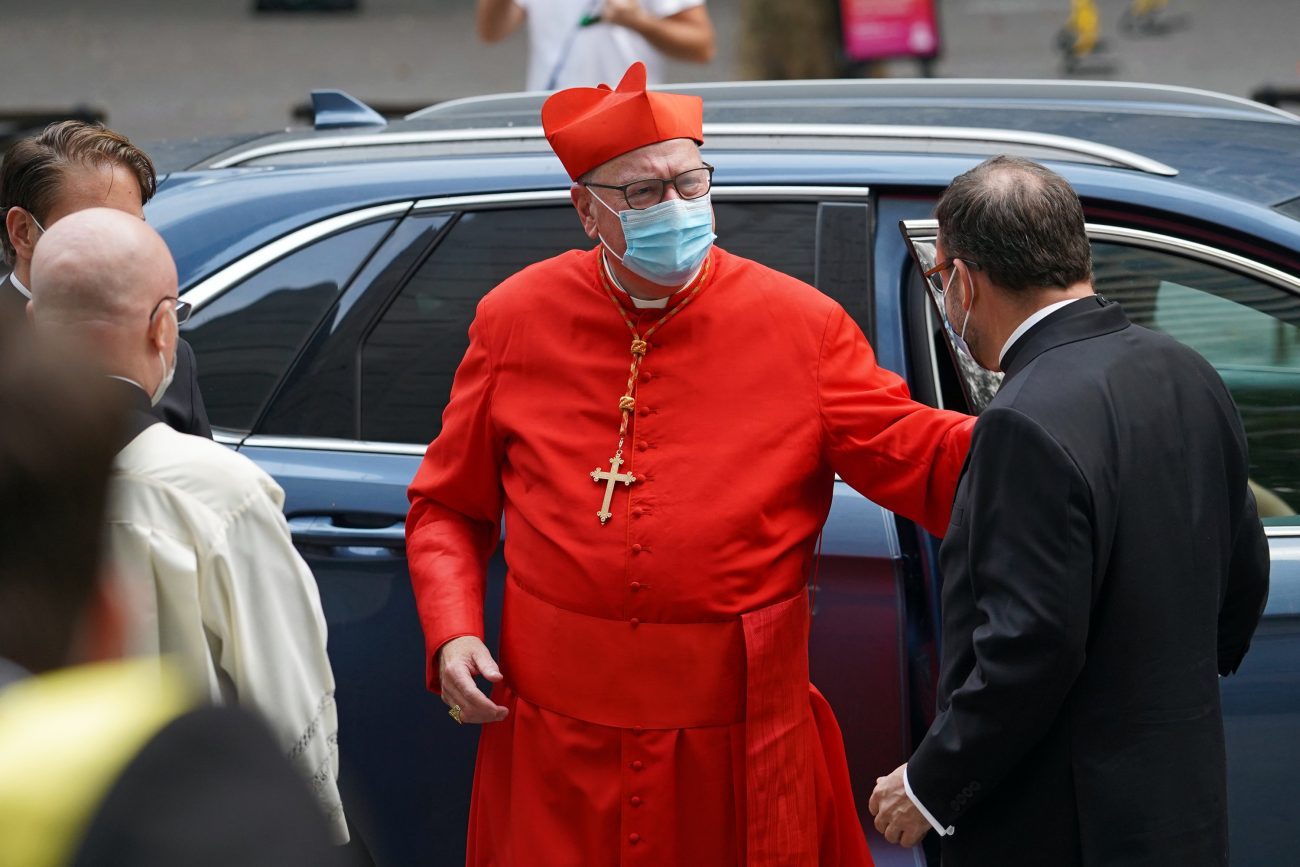 New York Cardinal Timothy M. Dolan greets Msgr. David Charters, first secretary at the Vatican's Permanent Observer Mission to the United Nations, as he arrives for a prayer service for U.N. diplomats Sept. 14, 2020, at Holy Family Church in New York City. The service, hosted by the mission, was held on the eve of the opening of the 75th session of the U.N. General Assembly. (CNS photo/Gregory A. Shemitz)

NEW YORK (CNS) — The worldwide coronavirus pandemic cast an unmistakable shadow over an otherwise hopeful prayer service Sept. 14 on the eve of the opening of the 75th session of the U.N. General Assembly.

In a videotaped address, U.N. Secretary-General Antonio Guterres said the coronavirus pandemic “has exacerbated inequalities within and among countries, and it is reversing hard-won progress on poverty eradication, food security and other Sustainable Development Goals.”

“It also has caused the closing of places of worship,” he said, “and upset what is deeply ingrained in our human nature: our shared impulse to gather and face hard times together.”

“The crisis also highlights both the interdependency and the fragility of our world,” he said. “It shows that no one can do it alone. It reminds us why international cooperation is essential.”

The secretary-general said, “Our common family is at a crossroads. We will only succeed through unity, leadership and solidarity.”

Cardinal Timothy M. Dolan of New York noted the prayer service was the first for its presider, Archbishop Gabriele G. Caccia, who was appointed papal nuncio to the U.N. in November 2019 and officially took the post in January 2020.

The cardinal said the pillars of the United Nations resonate cogently with the church’s teaching. He described them as “preventing the scourge of war, affirming human rights, promoting social progress especially among the poor, and maintaining justice and responsibility for obligations of treaties and international law.”

He said the “horror of COVID-19 displayed how interconnected we are” and “heightened our planet’s solicitude for elders and the vulnerable” and “unleashed heroic acts of sacrificial service.” He said it slowed people down, provided an opportunity to cultivate prayer, concern and outreach, and also underscored the vulnerability of health care networks.

“It reminded us of how many have no access at all,” he said.

Cardinal Dolan drew a parallel between the Sept. 14 feast of the Triumph of the Cross and the formation of the United Nations after the “death and darkness of World War II.”

“The U.N. has always paid attention to those who suffer injustice, wounds, rejection, hunger, thirst and brutality as Jesus did on the Tree of the Cross,” he said.

He recalled the 1965 address of St. Paul VI to the General Assembly. The pope appealed to the moral conscience of mankind. Cardinal Dolan quoted him: “The edifice of modern civilization must be built upon spiritual principles, the only principles capable not only of supporting it but also of enlightening and animating it. These indispensable principles of superior wisdom must be founded on faith in God.”

The president of the 74th session of the General Assembly, Tijjani Muhammad-Bande of Nigeria, said the meaning of the pandemic is not yet clear, but “must include the need for compassion and thoughtfulness.”

“We are one humanity” and must “beseech the creator that we have the knowledge, the courage, the compassion and the wisdom to do what is right by our fellow human beings,” he said.

The annual interreligious service has been sponsored since 1987 by the Vatican’s Permanent Observer Mission to the United Nations, the Archdiocese of New York and the Church of the Holy Family, the self-described “United Nations Parish” where it was held.

In prior years, U.N. ambassadors, staff, religious leaders parishioners and representatives of nongovernmental organizations stood and sat elbow-to-elbow during the hourlong service, clustered on the steps outside beforehand and mingled at a reception afterward in the church hall.

This year, pandemic safety considerations limited attendance, enforced spacing, reduced interaction and eliminated the reception. Musicians from the Scola Cantorum of St. Vincent Ferrer Parish in Manhattan were clearly heard but hidden from view behind a fabric screen in the choir loft as they performed a cappella preludes, hymns and choral responses.

Participants at the service recited a prayer for an end to the coronavirus pandemic, as well as other prayers for peace and the earth that were based on writings of Pope Francis. Prayers of petition were offered in Chinese, Arabic, Russian, Spanish and French.

In his welcoming remarks, Holy Family pastor Father Gerald E. Murray noted that Pope Francis addressed the General Assembly five years ago. He contrasted that “happy occasion” with the changes necessitated by the coronavirus.

He quoted Pope Francis’ Easter 2020 admonition to political leaders to work for the common good.

“This is not a time for indifference, because the whole world is suffering and needs to be united in facing the pandemic,” he said.

PREVIOUS: Court sides with Trump on right to end TPS