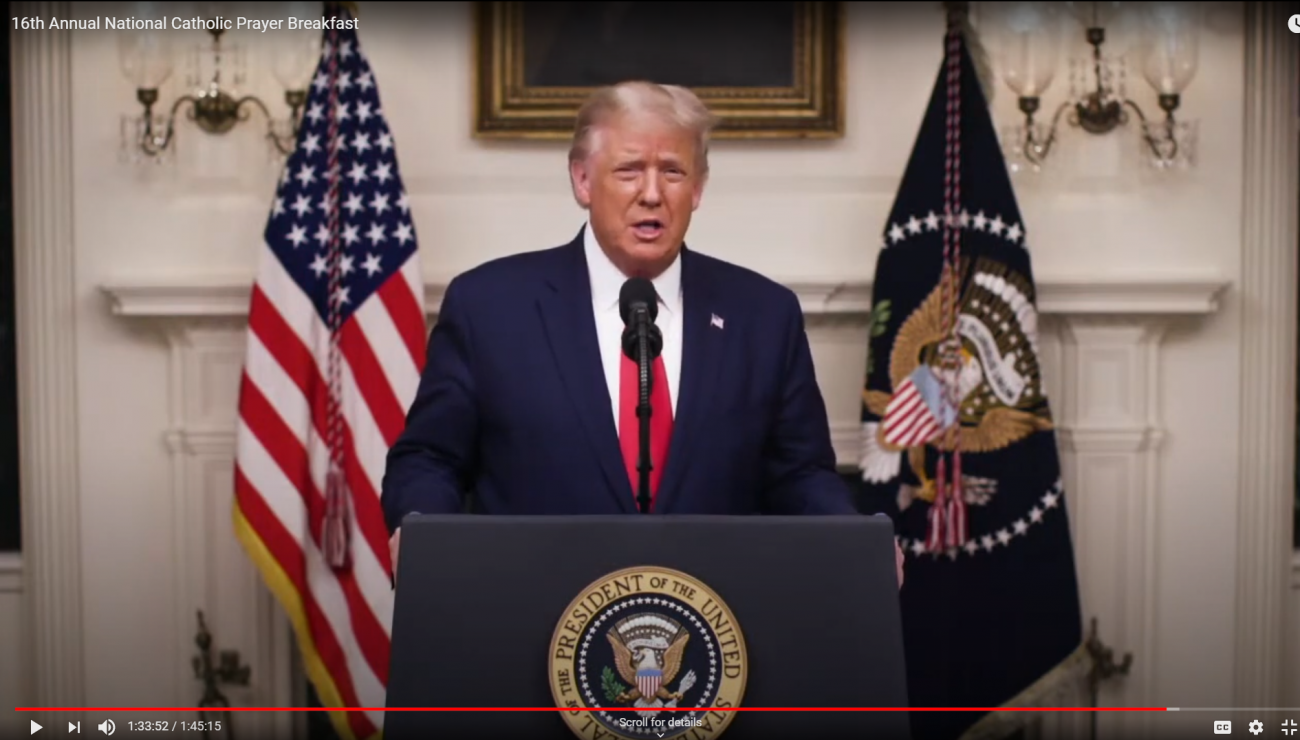 WASHINGTON (CNS) — President Donald Trump said Sept. 23 he would sign an executive order to “ensure that all precious babies born alive, no matter their circumstances, receive the medical care that they deserve.”

The Senate measure, sponsored by Nebraska Republican Ben Sasse, would require doctors, under penalties of fines and imprisonment, to provide the same care for a baby born alive after a failed attempt at abortion as they would for any child at the same point in its gestation.

Trump’s “actions today provide necessary legal protections for some of the most vulnerable in society,” said Jeanne Mancini, president of the March for Life Education and Defense Fund, in a statement.

“These steps had to be taken,” she said, “because some Democrats in the Senate promised to block legislation that mandates basic medical care for children who survive an abortion — an extremist view shared by vice presidential candidate Kamala Harris.”

“Our nation is strong because of Catholics and all people of faith, and the belief that all children, born and unborn, have the right to life,” Trump said in his remarks to the breakfast. He called the executive order “our sacrosanct moral duty.”

Trump was the first president to address the breakfast, held annually in Washington since 2004, since George W. Bush, who appeared at the gatherings from 2005 to 2008.

Attorney General William Barr, a Catholic, became the second recipient of the breakfast organization’s Christifideles Laici Award, created last year “in honor and gratitude for fidelity to the church, exemplary selfless and steadfast service in the Lord’s vineyard.”

His acceptance remarks echoed a speech he’d given at the University of Notre Dame in October 2019.

“Times of trial have a way of reminding us how much we have to be grateful for,” he said. “We carry on a tradition that goes back to the founding of the republic.”

George Washington knew religion “was at the heart” of American government, Barr added, and “the crucial link between religion and liberty, so well understood at the founding, is often misunderstood today.”

As he had done in his Notre Dame speech, Barr criticized “militant secularists” for “attempting to drive religion from the public square.”

“Traditional morality has eroded,” and militant secularists, he said, have promoted “a new orthodoxy that is actively hostile to religion. Separation of church and state does not mean, and never means, the separation of religion and civics.”

The keynote speaker, Auxiliary Bishop Robert E. Barron of Los Angeles, the founder of Word on Fire Catholic Ministries and a longtime broadcaster, praised the “exceptional, important link” between Thomas Jefferson’s authorship of the Declaration of Independence and St. Junipero Serra’s founding of a string of missions in Southern California and Mexico.

Classical philosophers such as Aristotle and Plato believed “it’s the inequality of the social classes that’s the key to a rightly ordered situation,” he explained. “What happened? What happened between these classical thinkers and this young 18th-century Virginia lawyer who said it was ‘self-evident’ that all men were created equal?”

Not all may be equal in intellect, skills and other abilities, “but all are equally children of God,” the bishop said.

St. Junipero Serra, in establishing his missions, was sometimes accompanied by the Spanish military, but was not interested in the consolidation of military power. His only interest was in “sharing the good news of Jesus Christ. That’s what fired his heart,” Bishop Barron said.

The Spanish missionary also believed “the rights of these people he was evangelizing should be respected.”

Jefferson, although considered a Deist — someone who stresses observation over religious belief and revelation — “to some degree had been evangelized. To some degree, he had heard the good news.”

“A privatized religion is bad for religion and bad for democracy” Bishop Barron concluded. “Bring your evangelized self into the public forum.”

In his remarks, Mark Randall, event chairman of the National Catholic Prayer Breakfast, said: “Our country needs more Catholics who are willing to live out their faith in the public square.”

“Today, Catholics came together virtually to do what we do every year, pray for our country — that’s our mission as American Catholics,” he said later in closing the event. He thanked Bishop Barron for his keynote speech and also thanked Trump and Barr for “the critical role they have played in protecting our religious freedom and the rights of the most vulnerable, the unborn.”

Ahead of the breakfast, a number of Catholic organizations protested Barr’s award, saying as a Catholic who reinstated the federal death penalty he should not be honored. The groups included the Association of U.S. Catholic Priests; the Catholic Mobilizing Network; the Sisters of St. Joseph of Carondelet, St. Paul, Minnesota, province; the Office of Social Justice and Respect Life of the Archdiocese of Santa Fe, New Mexico; and Network, a Catholic social justice lobby.

“In the political shadow of the Catholic Prayer Breakfast this morning, our politicians are once again attempting to wrangle Catholics with the all too flawed, narrow and politically opportunistic view of our faith,” said Sister Simone Campbell, a Sister of Social Service, who is Network’s executive director.

The breakfast, always held in Washington, was originally scheduled for March 30 and was canceled as a live event after District of Columbia health authorities banned all large gatherings as a result of the COVID-19 pandemic.

But organizers decided to revive it as an online livestreamed event after realizing “prayer is unstoppable,” Randall said.

About 10,000 people registered to view the program online. It also was broadcast by EWTN.

NEXT: Sister Norma Pimentel named one of Time magazine’s 100 most influential people of 2020