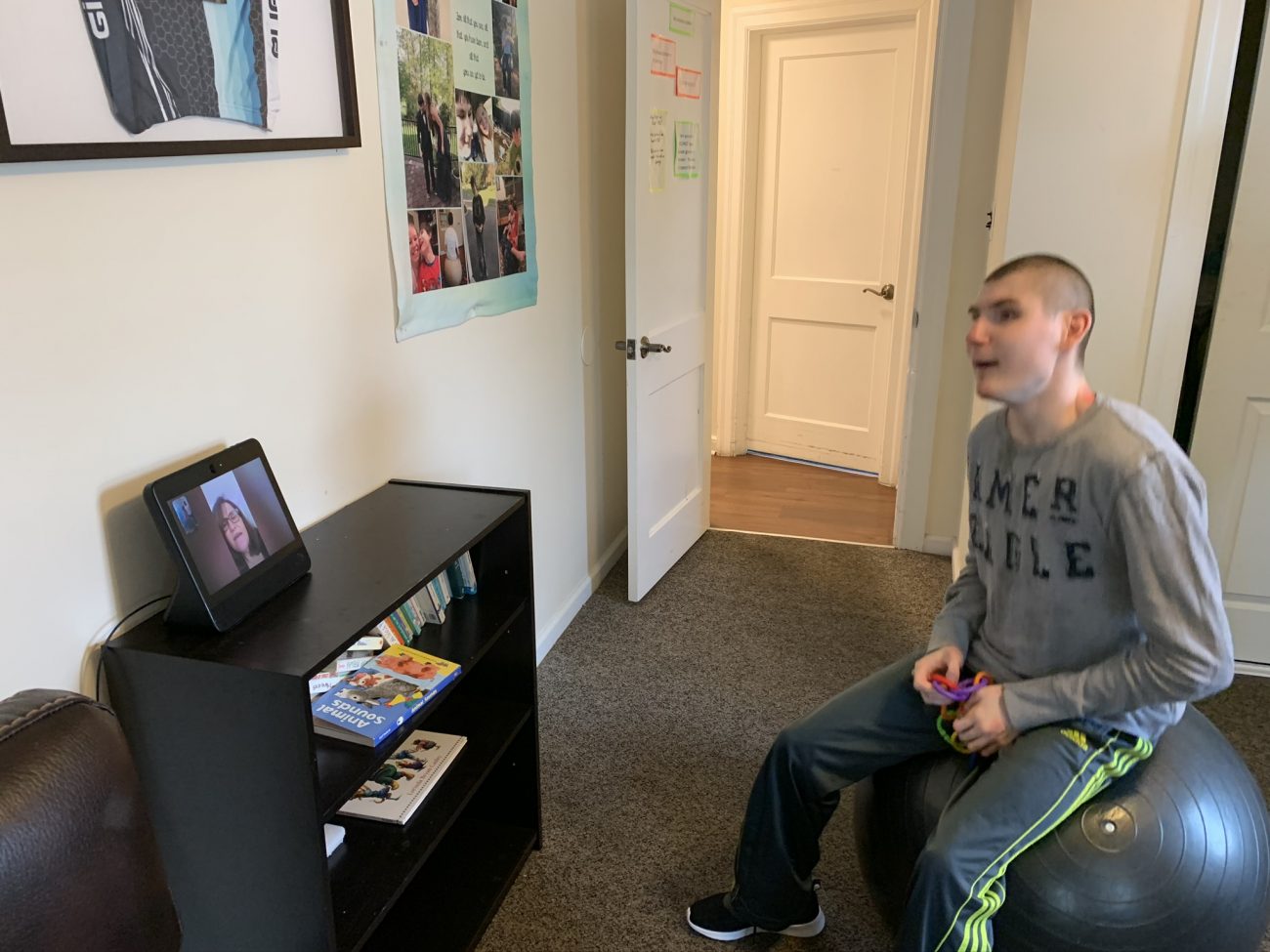 Garrett Goetz, a young adult with intellectual and physical disabilities, has found a home of his own in a group living arrangement offered by the Communities of Don Guanella and Divine Providence, part of archdiocesan Catholic Social Services. In this image, he is seen talking via FaceTime Sept. 14 with his mother, Judy, who lives in North Carolina. (Gina Christian)

More than four years ago, she and her husband Aaron found themselves having to relocate their family from North Carolina to Pennsylvania due to work. Packing up was a daunting task; one daughter had just started high school, the other was going into fifth grade.

But the thought of uprooting their oldest son, Garrett, seemed utterly impossible. With severe disabilities and only 5 percent of his vision, the 20-year-old needed the support system his family had worked so hard to build.

And that care was more critical than ever. Six months earlier, Garrett’s longtime cardiologist had advised Judy and Aaron that their son only had months to live.

A move would be a devastating shock for all of them, and the journey ahead would take a turn the devout Catholic family couldn’t begin to imagine.

A life against the odds

Born with a congenital heart defect, Garrett had suffered a cardiac arrest when he was just two weeks old, nearly dying during a 12-hour surgery. Six months later, he was back in the operating room to repair a calcified valve. Intubated 10 times in two weeks during that hospitalization, he spent the next 16 years on a feeding tube.

Due to his blindness, Garrett also endured well over a dozen surgeries on his eyes, leaving him with only scant vision. Brain damage from the cardiac arrest left Garrett nonverbal and impaired his physical mobility. Scar tissue precluded additional heart surgeries; during his last procedure at age 10, “he almost bled out,” said Judy.

Yet Garrett defied daunting odds, bolstered by his loved ones and a network of physicians and therapists. By age 20, he had settled into a rhythm of life, communicating through his unique version of sign language and developing a passion for music and books.

Judy had even started a nonprofit foundation to provide activities and outings for Garrett and other persons with disabilities. Her kitchen was filled with the scent of the apple pies, sweet potato casseroles and jam Garrett and his friends learned to make.

Then two cruel blows struck the family in short order: the grim prognosis from Garrett’s cardiologist, and massive layoffs at Aaron’s company that forced the executive to accept a new position in Pennsylvania or face unemployment.

“We pondered and pondered,” said Judy. “It was quite awful.”

They began preparing for Garrett’s death, and reluctantly concluded that perhaps his pending passing was a sign they were to go on to Pennsylvania.

But once there, they realized that sign was far more than it seemed.

Garrett remained stable during the move to Pennsylvania, and as the family settled in, Judy began reassembling a support network for her son.

“I was just searching for everything,” she said. “I spent many days calling around.”

Although Judy and Aaron couldn’t help but question why God had directed them to Pennsylvania, they prayed for guidance and insight, which came with stunning clarity – especially when Garrett’s new cardiologist asked them why they thought their son was dying.

“That diagnosis had been from a cardiologist we’d had for 16 years,” Judy said. “We’d sat at a conference room table and filled out end-of-life forms.”

With Garrett holding his own, Judy continued her search for resources, eventually connecting with the Communities of Don Guanella and Divine Providence (DGDP) in Springfield.

As soon as she and Aaron toured DGDP, they realized “the staff was so different than those in group homes back in North Carolina,” said Judy.

“For them, it didn’t feel like a job, but a calling,” she said. “There’s a level of compassion and a call for treating others the way they should be treated.”

Garrett thrived in his new residential environment, and during his visits with his family, he began to show “how happy he was,” Judy said.

In fact, he was quite eager to get back to his own place, she said.

“One time, after he’d spent the night with us, I said, ‘Garrett, I’ll take you back to your house now,’” Judy recalled. “He marched right to the door.”

A home of his own

That sense of independence and belonging reassured the family when Aaron was recruited by a new firm back in North Carolina. Once again, the Goetzes faced a choice that “terrified” them, said Judy.

After “much thought and prayer,” she said, they came to realize that Garrett begun to build his own life at DGDP, where he lived in a group home with full-time caretakers and a handful of other young men with disabilities.

“The sense of pride that he has living ‘on his own’ would be taken away if we did not allow him to stay,” Judy said. “He has found his second family among the staff and his roommates.”

Judy and Aaron packed up their household, but their return trip to North Carolina, though bittersweet, was marked by a profound peace.

“I don’t worry about Garrett at all,” she said. “It feels like a level of extended family, and I know they care.”

She views their Pennsylvania sojourn and the events that spurred it as “divine intervention,” she said, since the family “never would have moved” otherwise.

Today, Garrett enjoys a full schedule at his suburban Delaware County group home, a new, spacious structure with inviting rooms and an expansive yard. He regularly speaks with his family through FaceTime between in-person visits.

In particular, the 24-year-old is an avid reader, said house manager David Saah.

“Other housemates will fall asleep while we’re reading, but Garrett will listen to a book all the way through,” said Saah.

When he’s not absorbed in a story or a group activity, Garrett listens to music and exercises regularly, said Saah.

“G-Man,” as he’s fondly known, is “very accepting” of others, said Saah.

On meeting someone, Garrett will “come very close in your face, trying to recognize the person,” said Saah. “Then he’ll look at you, come closer and kiss your jaw.”

At the same time, Garrett is “very independent,” Saah added.

When he’s ready to take on a new task, said Saah, Garrett leaps to the occasion.