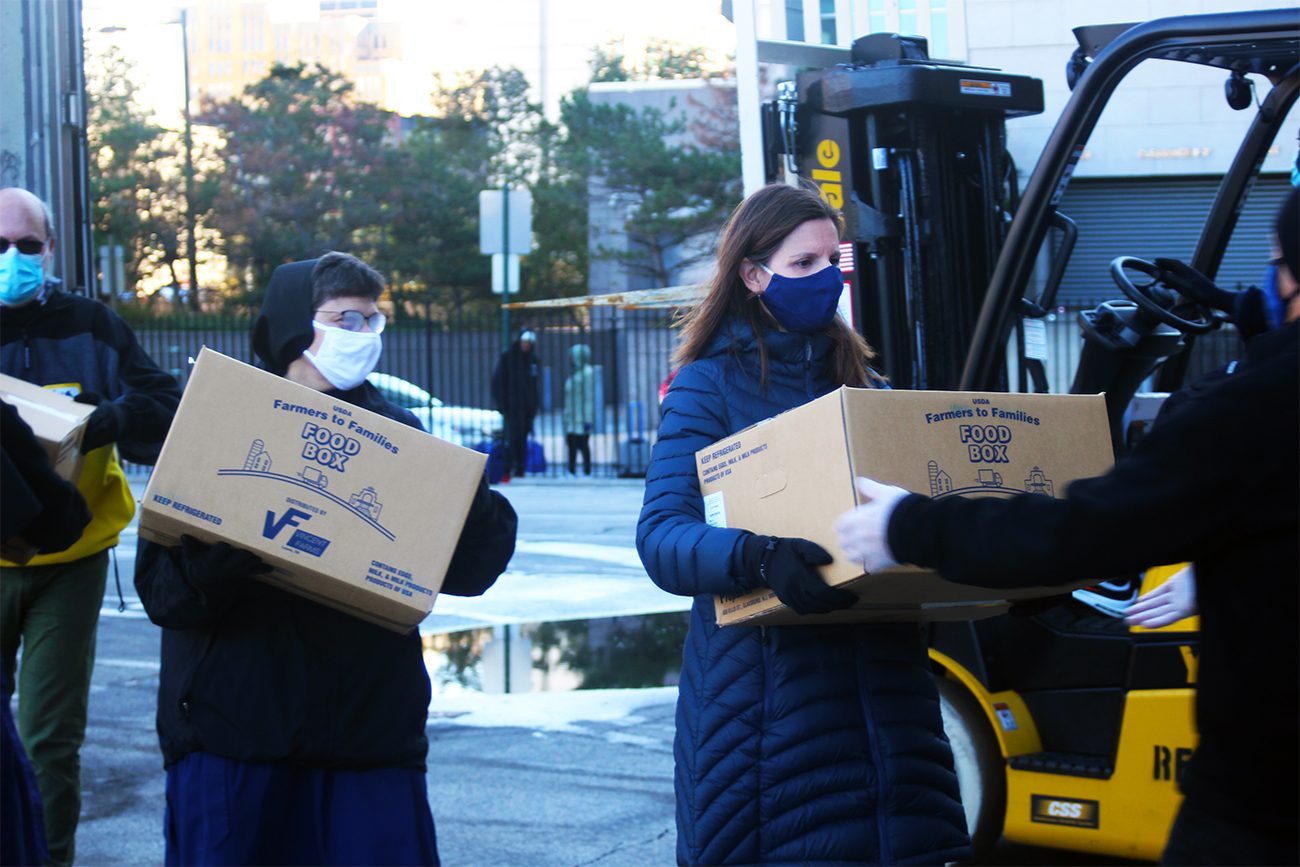 Hundreds of area families in need received fresh groceries this past weekend, thanks to the Archdiocese of Philadelphia, a Delaware farmer and the federal government.

On Oct. 17, archdiocesan Nutritional Development Services (NDS) teamed up with the U.S. Department of Agriculture (USDA) to distribute more than 1,150 of that agency’s Farmers to Families Food Boxes.

Volunteers — most of them archdiocesan staff, clergy and religious — gave out the boxes Saturday in the parking lot of the Archdiocesan Pastoral Center, adjacent to the Cathedral Basilica of SS. Peter and Paul. Clients arrived on foot and by car, with many queuing two hours ahead of time.

The boxes’ vegetables and fruit were largely harvested from the 3,000-acre Vincent Farms in Laurel, Delaware. Owner Ray Vincent began partnering with the USDA initiative shortly after its launch in May.

In a July interview with local media, Vincent noted the project was important for farmers, whose perishable harvests have been jeopardized by pandemic-related downturns in the restaurant, hospitality and food service sectors.

Now in its third phase, Farmers to Families has so far delivered some 106 million boxes to food banks, community and faith-based organizations and other nonprofit aid groups such as NDS.

“I feel so blessed, and … I’m just very happy to have food,” said one woman, who declined to give her name. “The pandemic has lasted so much longer than we thought, and this really helps a lot when food is so expensive and you’re paying other bills.” 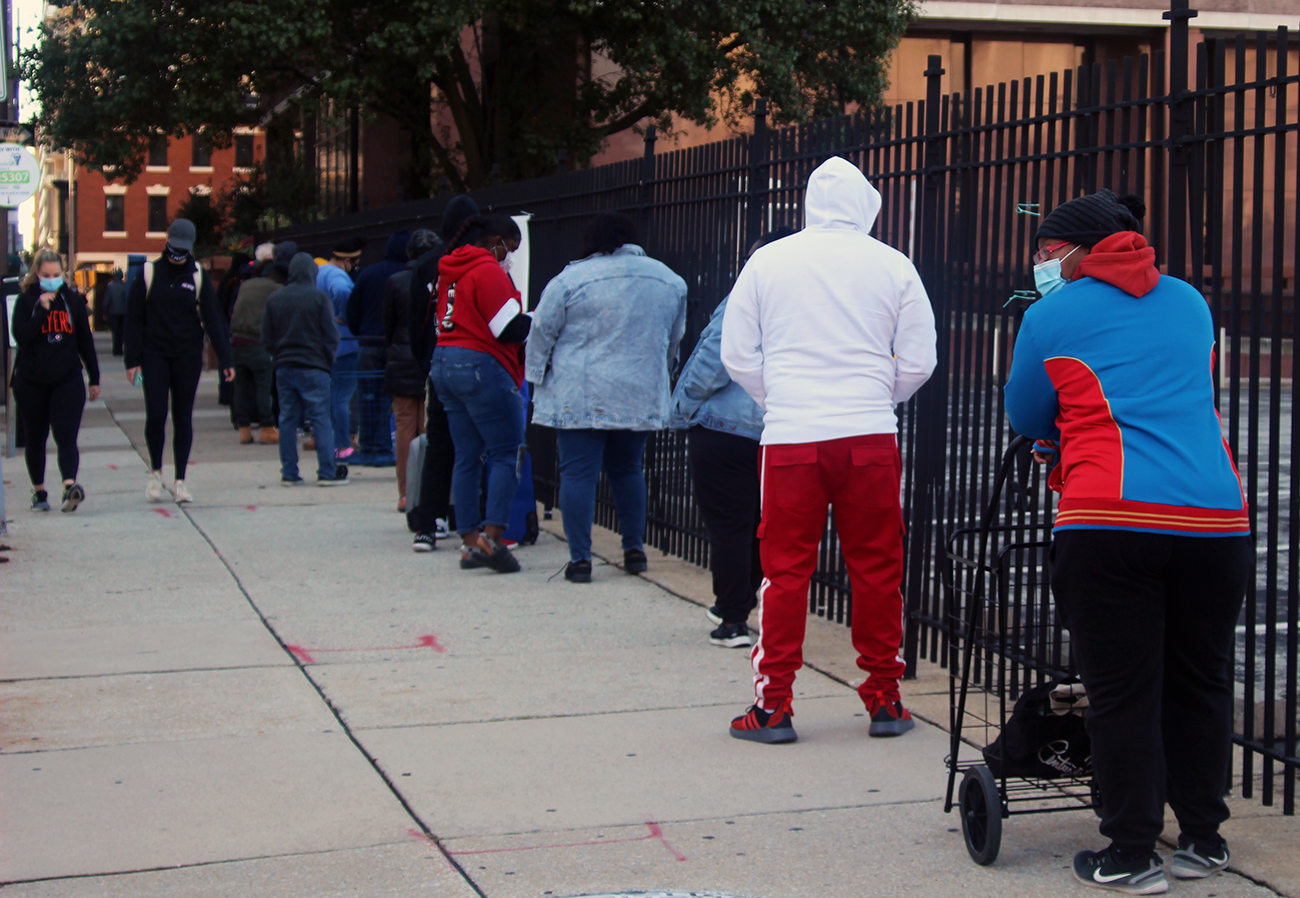 Clients lined up along 17th and Vine Streets for an Oct. 17 distribution of fresh food sponsored by the USDA and coordinated by archdiocesan Nutritional Development Services at the Archdiocesan Pastoral Center. Many inner-city families live in “food deserts” where a lack of grocery stores makes it difficult to purchase fresh produce. (Gina Christian)

A second woman (who also wished to remain anonymous) agreed, adding that fresh food is often difficult to purchase in inner city neighborhoods.

“If you’re not struggling to buy food, sometimes you’re struggling to find it,” she said, noting the number of “food deserts” – areas without full-scale grocery stores – in Philadelphia.

The move to online learning has compounded that lack, since thousands of families rely on the USDA-funded breakfasts and lunches served at area schools.

“Some kids are in school, some are not,” she said. “But we have almost 100 emergency feeding sites through the five-county region, and we have about 20 to 25 learning pods that are receiving meals for kids who are in virtual education outside of their homes.”

Hill said that her agency, which reported a 900% increase in service levels in the spring, is gearing up for added demand.

“We’re not at the rates we were in July, but we are ramping up for sure,” she said.

Amid COVID, gratitude for God’s “provident goodness” is more essential than ever, said Father Dennis Gill, director of the archdiocesan Office for Divine Worship and rector of the Cathedral.

In blessing the food prior to distribution, Father Gill said that he “wanted to make the point that it always needs to move in two directions.”

“First, we thank God … (since) every gift comes from the Lord,” he said. “And I want those who are most in need not to forget that God is ready to provide for them.”

PREVIOUS: Divine providence leads young man with disabilities to home of his own

NEXT: Pandemic’s pressures lead to closure of St. Basil Academy