In a Sept. 2020 webinar, Rabbi David Straus (left), senior rabbi of Main Line Reform Temple and a consultant to the U.S. bishops, and Father Walter Kedjierski, executive director of the U.S. bishops’ Secretariat for Ecumenical and Interreligious Affairs, said that Catholic-Jewish relations can serve as a model for healing other societal divisions. (CatholicPhilly.com composite photo/Yael Pachino Photography/CNS Photo-Gregory A. Shemitz)

Lessons learned from Catholic-Jewish relations can help heal other divides in the U.S., according to several experts.

Amid multiple crises such as COVID, racism and antisemitism, “many if not all of us have been tempted at times to fall into the darkness of despair,” said Father Walter Kedjierski, executive director of the U.S. bishops’ Secretariat for Ecumenical and Interreligious Affairs.

But the fact that many Catholics would now find it “unthinkable” to “(walk) away from friendships with Jewish people” is a sign that “we have grown in our respect for each other,” proving that broader change is possible, he said.

Father Kedjierski shared his insights during a recent webinar hosted by the Institute for Jewish-Catholic Relations (IJCR) at St. Joseph’s University.

Last month, the IJCR hosted “Dialogue as an ‘Exchange of Gifts:’ How the Catholic-Jewish Rapprochement Can Enrich American Society,” with Father Kedjierski and fellow presenter Rabbi David Straus reflecting on the hope offered by an ongoing conversation between the two faith traditions.

IJCR co-directors Philip Cunningham and Adam Gregerman moderated the hour-long Sept. 14 webinar, one of several presented by the institute on a regular basis with national and international speakers.

Rabbi Straus pointed to his own collaboration with the U.S. bishops as an example of successful interfaith dynamics. The senior rabbi of Main Line Reform Temple-Beth Elohim in Wynnewood, Rabbi Straus co-chairs the National Council of Synagogues, which regularly consults with the bishops’ ecumenical secretariat.

The partnership demonstrates the significant progress made in Catholic-Jewish relations over the past several decades.

After the horrors of the Shoah — the preferred term for the systematic murder of 6 million Jews during the Second World War — the Catholic Church “engaged in a process of self-examination and reflection that led to no less than a revolution,” said Rabbi Straus.

The Second Vatican Council document Nostra Aetate (“In Our Time”) traced the first steps in this new direction, he said. 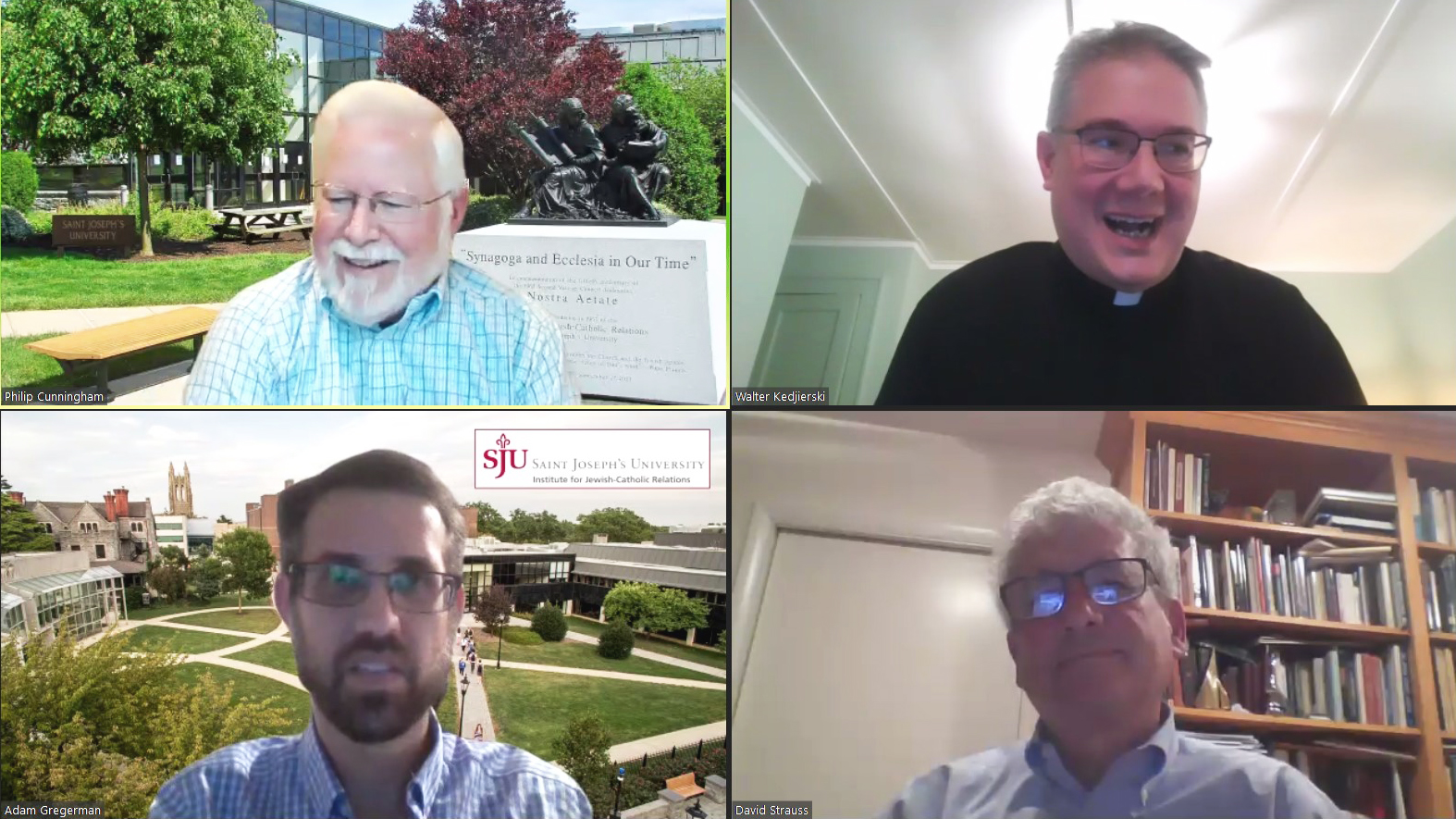 Such persecution had been formalized by a centuries-old “theology of contempt” that denounced Jews as the murderers of Christ, said both Rabbi Straus and Father Kedjierski.

They added that Nostra Aetate itself was the product of inspired Catholic-Jewish dialogue.

In 1947, renowned Jewish academic Jules Isaac, who lost his family after the Nazi invasion of France, published “Jésus et Israël,” the first full analysis of Christian anti-Judaism. Later that year, he helped formulate the International Council of Christians and Jews’ “Ten Points of Seelisburg,” which stressed Christianity’s need to recover a historically and theologically accurate understanding of Judaism.

Isaac met with Pope Pius XII in 1949, but it was his 1960 encounter with Pope John XXIII (who as Cardinal Roncalli had helped thousands of Jews to flee the Nazis) that spurred the church to act on the issue.

Rabbi Straus described Nostra Aetate as “a model for a paradigm shift” and a pattern for “how to make a moment into a movement.”

Those who seek this exchange are courageous enough to recognize the “historical cautiousness of the other,” he said, due to the painful wounds of injustices, both past and present.

Rabbi Straus said that over the centuries Jews largely faced “expulsion, massacre, discrimination” and a sense of being “used when needed (as a) barely tolerated minority.”

Redressing that legacy — and that of systemic racism toward Black and Indigenous peoples — requires honesty and humility, said both Father Kedjierski and Rabbi Straus.

Listening to “the voices of others … can break the delusions” that lead to complacency and selfishness, Father Kedjierski said.

Rabbi Straus stressed the importance of “affirming (others’) narratives on their terms” as well.

While dialogue has an essential spiritual dimension, Father Kedjierski added, its success is manifested in “tangible action.”

“Apologies, to be genuine, must be lived and demonstrated,” he said.

Above all, said Rabbi Straus, it is vital to believe that “transformation is possible.”

“No matter how deeply painful our past history … (there) has been true change,” he said.

Nostra Aetate serves as “a model for reconciliation” that can be widely applied, he added, since it rests solidly on “at least three foundations,” among them a theological blueprint, the need to cultivate authentic interpersonal connections, and the importance of “sustained institutional relationships.”